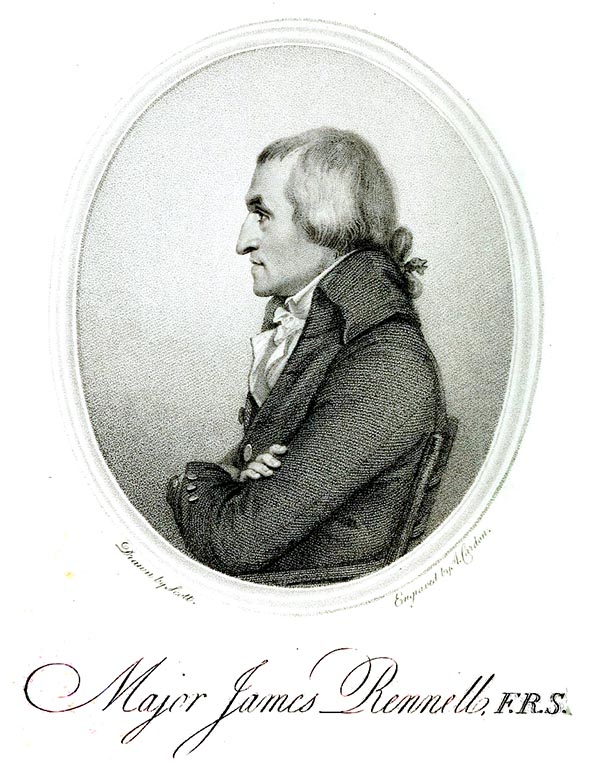 James Rennell (December 3, 1742 - March 29, 1830) was an English geographer, historian and seminal oceanographer, known as 'the Father of Indian Geography'. He would become, in 1830, one of the founders of the Royal Geographical Society in London. Rennell was born near Chudleigh in Devon, England. At 14 he joined the British Navy as a midshipman and served in the Seven Years' War. During his time in the Navy he mastered marine surveying; when his ship, HMS Grafton, saw service in India, he began lending his services to the East India company, accompanying hydrographer Alexander Dalrymple and drawing charts between 1759 and 1764. Following the Seven Years' War, seeing no prospect of advancement in the Navy he left the navy and joined the British East India company's sea service, where he continued survey work. Eventually he would be commissioned with the Bengal Engineers, and his surveys in India proper began in earnest. He would become surveyor-general for the EIC in Bengal, remaining in service until 1777. He would retire from active duty with the rank of Major in the Bengal Engineers. From London, he published extensively: his 1779 Bengal Atlas, and his 1783 map of India set the standard for the mapping of the subcontinent. He set his career to paper in the 1788 book Memoir of a map of Hindoostan.