1867 Holmes Map of the Upper West Side and Manhattan Valley, New York City 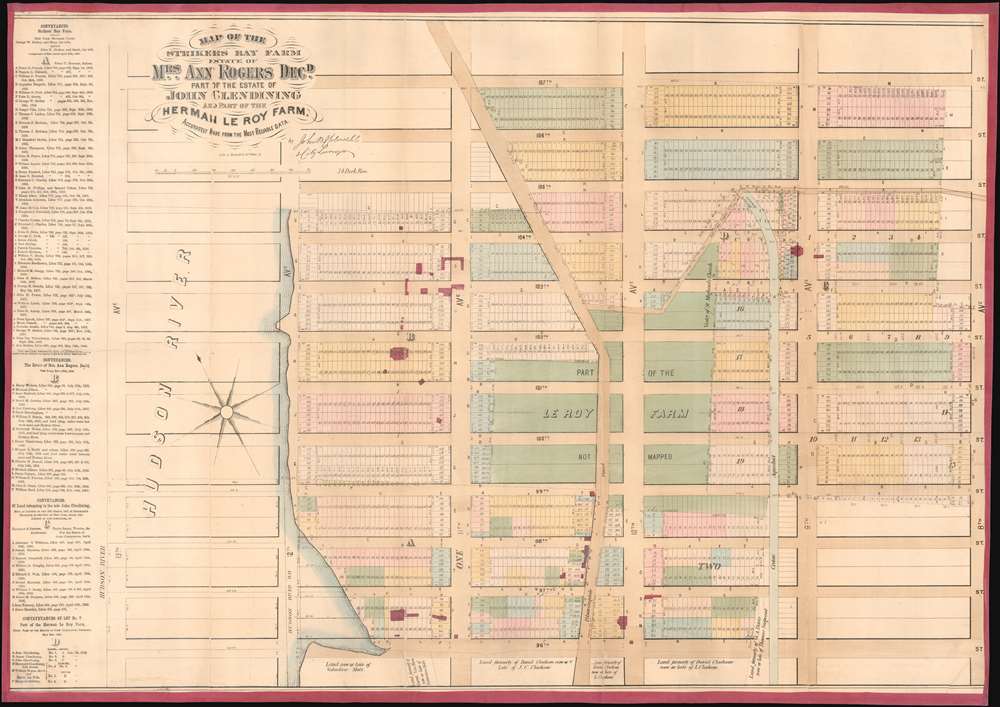 1867 Holmes Map of the Upper West Side and Manhattan Valley, New York City

One of the earliest speciic maps to detail Manhattan Valley and the northern part of the Upper West Side.
$3,800.00

One of only 5 known examples of John Bute Holmes's c. 1874 cadastral map of the northern part of the Upper West Side and Manhattan Valley, New York City. The map covers from 96th street to 107th street and from the Hudson River to Central Park (8th Avenue / Central Park West). Today, with its proximity to both Riverside Park and Central Park, this is one of Manhattan's most desirable neighborhoods.

This map is a cadastral map, that is, a map illustrating property lines and lots. It employs color coding, overprinting, and an alpha numeric system, to identify both old property lines dating to the earliest days of Manhattan's development and modern street grid and property lines compliant with the 1811 Commissioner's Plan. Old gentlemanly estates, most overlooking the Hudson, appear in red - these belonged with wealthy families, most of Dutch and English descent, who owed much of this land, among them Strikers, Rogers, Glendining, and Le Roy. Modern day Broadway, also called Bloomingdale Road, winds its way from north to south, as does the course of the Croton Aqueduct. Proposed expansions, including property lots, extend well into the Hudson River. To the left of the map, a long list of deeds and conveyances breaks down the real estate history of the area.

In the early 19th century most of Manhattan was undeveloped farmlands, the property of wealthy landowners with claims dating to the Dutch period of New York's history. The northern 2/3rd Manhattan was dotted with farmlands and sprawling gentlemanly estates, many with great manor houses overlooking the Hudson River. The Commissioner's Plan of 1811 and the 1807 Commission Law, laid the street grid through many of these properties and gave the city the right to claim these lands under eminent domain, providing due compensation to the landowners. While this work occurred early in lower Manhattan, central and upper Manhattan were not formally acquired by the city until the mid-19th century.

This map was published by John Bute Holmes sometime between 1867 and 1872, probably on the earlier side. It was engraved and lithographed by the firm of Gustav Braeunlich and Co., who were located at 85 White Street during this period. There is only one edition. Holmes' cadastral maps are today all extremely rare. Of the present map, only three examples are cited in the OCLC with Stanford and the NYPL possibly holding a fourth and fifth.


Gustav Braeunlich (May 17, 1837 - January 15, 1923) was a German-Russian artist, lithographer, and engraver active in New York during the middle to late 19th century. Braeunlich was born in St. Petersburg, Russia and was of German-Saxon-Russian descent. His father was a Bishop in the Russian Orthodox Church. As a young man he served in the Russian army and saw action in the Crimean War. Census records suggest Braeunlich immigrated to the United States in 1860, settling in Brooklyn and studying art at Cooper Union, where he won several awards. It is not clear when he partnered with his younger cousin, Herman Braeunlich, to establish the engraving and lithographing firm G. Braeunlich and Co., but it was active from at least the 1862. The firm had multiple offices. The first may have been at 85 White Street, Brooklyn. In 1877 he was based at 58 Maiden Lane, Manhattan, where he shared the premises with cousin Herman Braeunlich (November 11, 1843 - August 3, 1916) and relative William Brauenlich. The firm relocated to 39 West Broadway in 1880. During his most active period Braeunlich engraved maps for John B Holmes, Tobacco Revenue stamps for the U.S. Treasury Department, and presidential campaign materials for Samuel Tilden. Braeunlich and his family, including Herman, lived in the same residence at 250 East 73rd at 3rd Ave, Brooklyn. Their name alternatively appears as 'Braunlich' and 'Breunlich'. After Gustav retired Herman maintained the business until at least 1910 from 86th Fulton Street, Manhattan. Gustav was the nephew of an important Brooklyn physician of the same name.