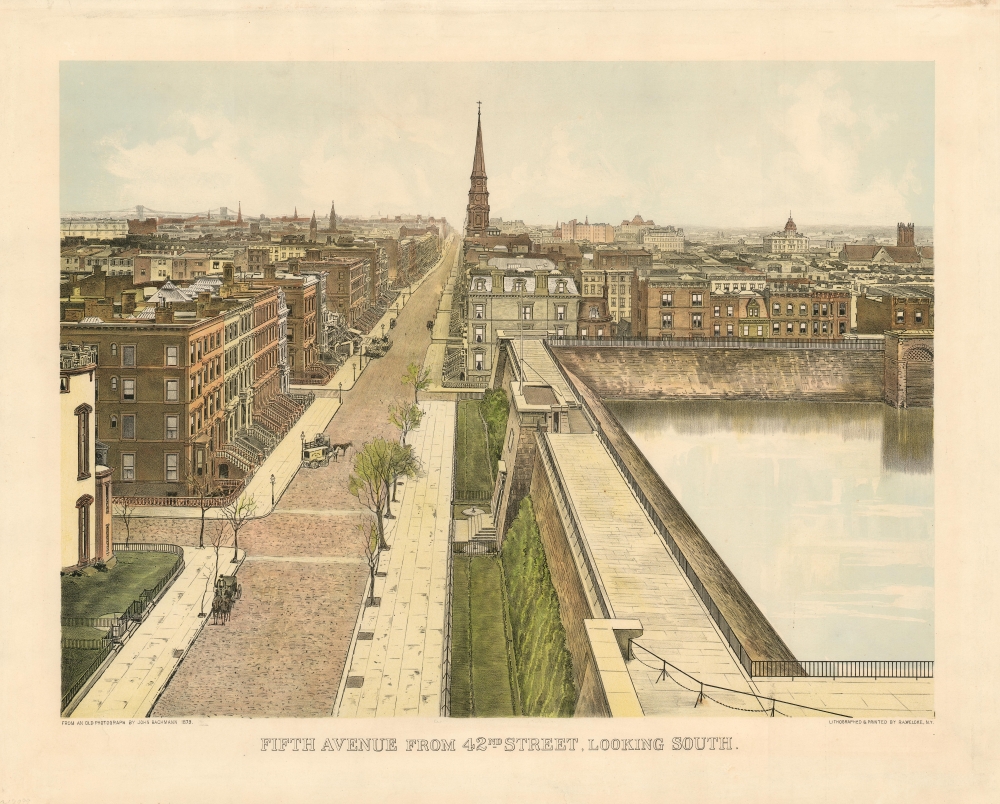 This is a beautiful photolithograph view of New York City’s Murray Hill neighborhood, executed in 1904 by printer Robert Welcke from a photograph taken in 1879 by the great panorama artist John Bachmann.

The southern-facing view looks down Fifth Avenue from above Forty-Second Street. The right-hand foreground is dominated by the Croton Distributing Reservoir (dismantled in the 1890s; the site is now occupied by main branch of the New York Public Library.) Its broad promenade afforded visitors nearly as good a view as the one captured in this image: Long Island, Westchester and the New Jersey Palisades could all be seen from the walls of the Reservoir. Most notable in the current view is the distant Brooklyn Bridge: although it would not open for another four years after this image’s source photograph was taken, both towers and their suspension cables had been completed and work had already begun on the superstructure. In the nearer distance, the spire of Brick Church at the corner of 37th street is recognizable. Running arrow-straight into the distance is Fifth Avenue itself: a brownstone-lined, cobblestone street with generous sidewalks and young trees planted along its length: a very different view than that of today. The youth of the neighborhood is emphasized by the constructions-in-progress.

The neighborhood was named after the property of the Murray family, a mercantile family that settled there in the 18th century. Up through the first half of the 19th century, the neighborhood was considered relatively isolated and remote from the rest of New York City, but as can be seen here, by the 1870s it was fully absorbed by the grid. Depending on whom one speaks to the borders of Murray Hill exhibit some fluidity but the New York Times delineation of a south-north range of 34th to 42nd streets and an east-west dimension of the East River to Madison Avenue seems the most inclusive.

This lithograph was printed in 1904 by Robert Welcke, and published by Max Williams. Despite its occasional appearance on the market, it is rare: we see only one example catalogued in OCLC, in the collection of Columbia University.

Robert A. Welcke (fl. 1876 – c. 1940) was a photolithographer active in New York in the latter part of the 19th century and early 20th century. Welcke was a Prussian immigrant, who emigrated to New York City from Wronki, Province of Posen, Prussia, in the 1870s. After he arrived, Welcke went into business with his brother, Edward Welcke, in New York City, who had arrived a decade earlier. After a split between the brothers during an economic depression in the late 1870s, Robert Welcke elected to continue in business on his own. Welcke's firm, Robert A. Welcke Offset Company, was based at 176 William Street. Welcke's corpus of work ranges from maps of New York and Connecticut to illustrations on Flemish Renaissance interiors to government maps and brochures to decorative sheet music covers. Following Welcke's death the firm was taken over by his daughter, Olga Welcke, who alongside William Jugens managed the firm until the outbreak of World War II. Learn More...


Max Williams (September 9, 1865 - December 5, 1927) was a German-American publisher and collector, active in New York City at the turn of the century. While he published the work of contemporaneous artists such as Robert Welcke, he is generally best known for his republishing of earlier works, in particular from Currier and Ives' original lithographic stones (Williams purchased the contents of Currier and Ives' shop upon its closing.) Williams was also apparently a collector of marine art himself, keeping a museum of nautical prints and exhibiting them to a public nostalgic for the age of sail. Learn More...