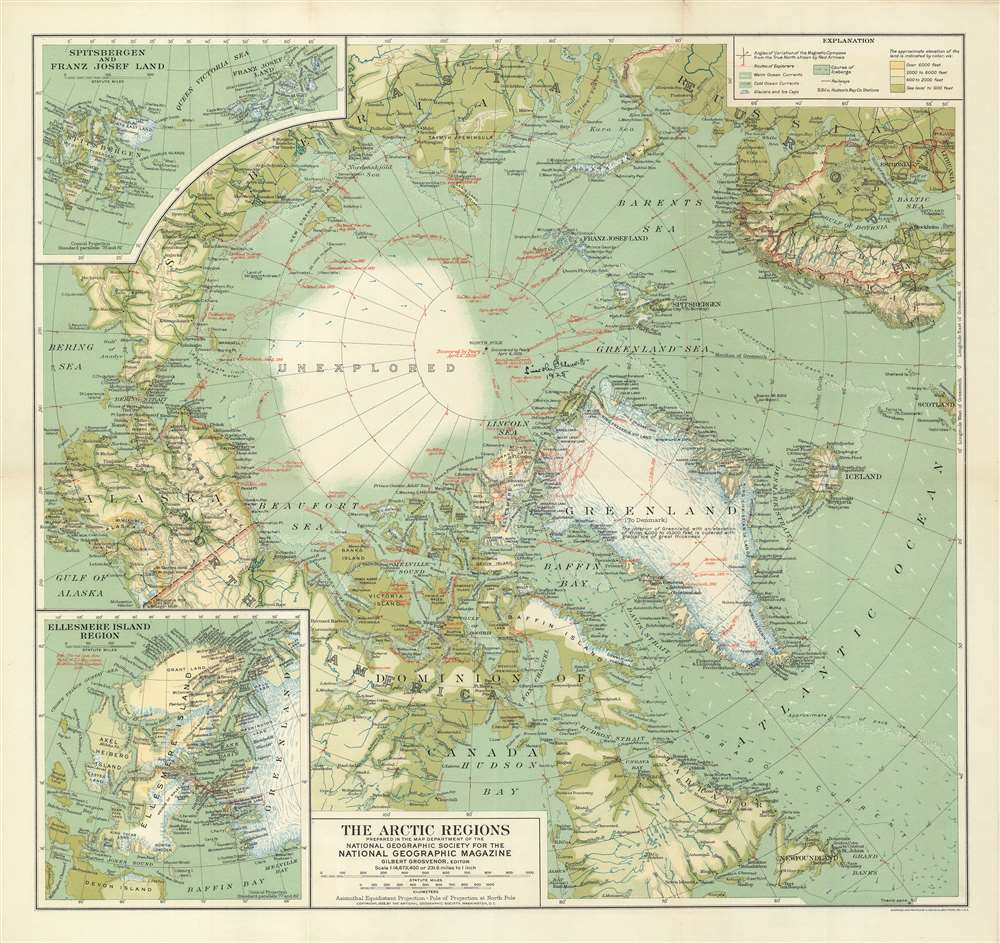 Map of the Arctic signed by Ellsworth - one of the first to fly to the North Pole!

A fascinating 1925 Gilbert Hovey Grosvenor map of the Arctic signed by the North Pole aviation pioneer Lincoln Ellsworth, in the year of his important voyage. Presented on an azimuthal equidistant projection, the map covers the northern polar regions from, roughly, the Arctic Circle, northward. Red overprinting illustrates the routes of previous Arctic explorers, among them Nansen, Lockwood, Peary, and the Amundsen-Ellsworth expedition itself. Lincoln Ellsworth's signature, which we have validated by comparison to other surviving examples, and the date 1925, appear near the North Pole and the Amundsen-Ellsworth route.

The Arctic Explorer and Playboy

Lincoln Ellsworth (May 12, 1880 – May 26, 1951) was the son of the wealthy Chicago-based coal magnate James Ellsworth. He attended various elite boarding schools before entering the Sheffield Scientific School at Yale. He subsequently studied at Columbia University and McGill. Ellsworth became obsessed with the Arctic exploration and leveraged his father's enormous wealth to sponsor several Arctic Expeditions. He was also a major benefactor of the American Museum of Natural History and an honorary Boy Scout.

Ellsworth's 1925 first Arctic voyage was financed by his father, James, shortly before his death. Ellsworth, accompanied by a small team headed by veteran Arctic explorer Roald Amundsen, attempted to reach the Pole in two Dornier Wal flying boats, the N24 and N25. The expectation set out from Svalbard on May 21, 1925. Due to the extreme cold, one of the two airplanes, the N28, lost power, forcing both to planes to make emergency landings, becoming separated in the process. After three days on the Arctic Shelf, the crews were able to regroup, but it took nearly 28 days before they were able to get the N25 to takeoff and return to base. While waiting for news of his son's missing expedition, James Ellsworth died in Italy. This map was issued shortly after that expedition.

Undaunted, Ellsworth and Amundsen made a second attempt at the Pole in 1926, also financed by Ellsworth. This time, the duo used a dirigible, the airship Norge. On May 12, 1926, they were successful in sighting the geographical North Pole. Between 1933 and 1939, Ellsworth made four subsequent self-funded expeditions, this time to Antarctica, where the Ellsworth Mountains, Ellsworth Land, and Lake Ellsworth are named after him.

This map was prepared by Gilbert Hovey Grosvenor and published by the National Geographic Society. The map itself is not exceptionally rare, but in this example Ellsworth's signature and the date of his historic first attempt at the Pole rise to the fore, making this a rare record of history as it happened.

Gilbert Hovey Grosvenor (October 28, 1875 - February 4, 1966) was an American photographer, journalist and editor active in the United States during the first half of the 20th century. Grosvenor was born in Istanbul under the Ottoman empire to American parents living and studying in Istanbul. He studied at the Worchester Academy, the Robert Elementary School, and at Amherst College, where he graduated Magna Cum Laude in 1897. In 1899, shortly after college Grosvenor became the first full time employee of the National Geographic Society - at the time headed by Alexander Graham Bell. In time he became the director, then, in 1920, president of the society. He retained this position, also editing the popular National Geographic Magazine, until 1954. Grosvenor advocated policies of neutrality and positive, upbeat journalism through two world wars, the Great Depression, and the beginning of the Cold War. He laid down the principles of photojournalism, earning the honorific, 'Father of Photojournalism.' He was a champion of the National Park Service, and Katmai National Park's Grosvenor Lodge is named in his honor. Grosvenor was married to Elise May Bell (1878 - 1964), daughter of inventor and National Geographic Society founding father, Alexander Graham Bell. Grosvenor's health deteriorated following the death of his wife and he died peacefully in his sleep at the age of 90 on February 4, 1966. He is interred at Rock Creek Cemetery alongside his wife and other members of the Bell family. Learn More...