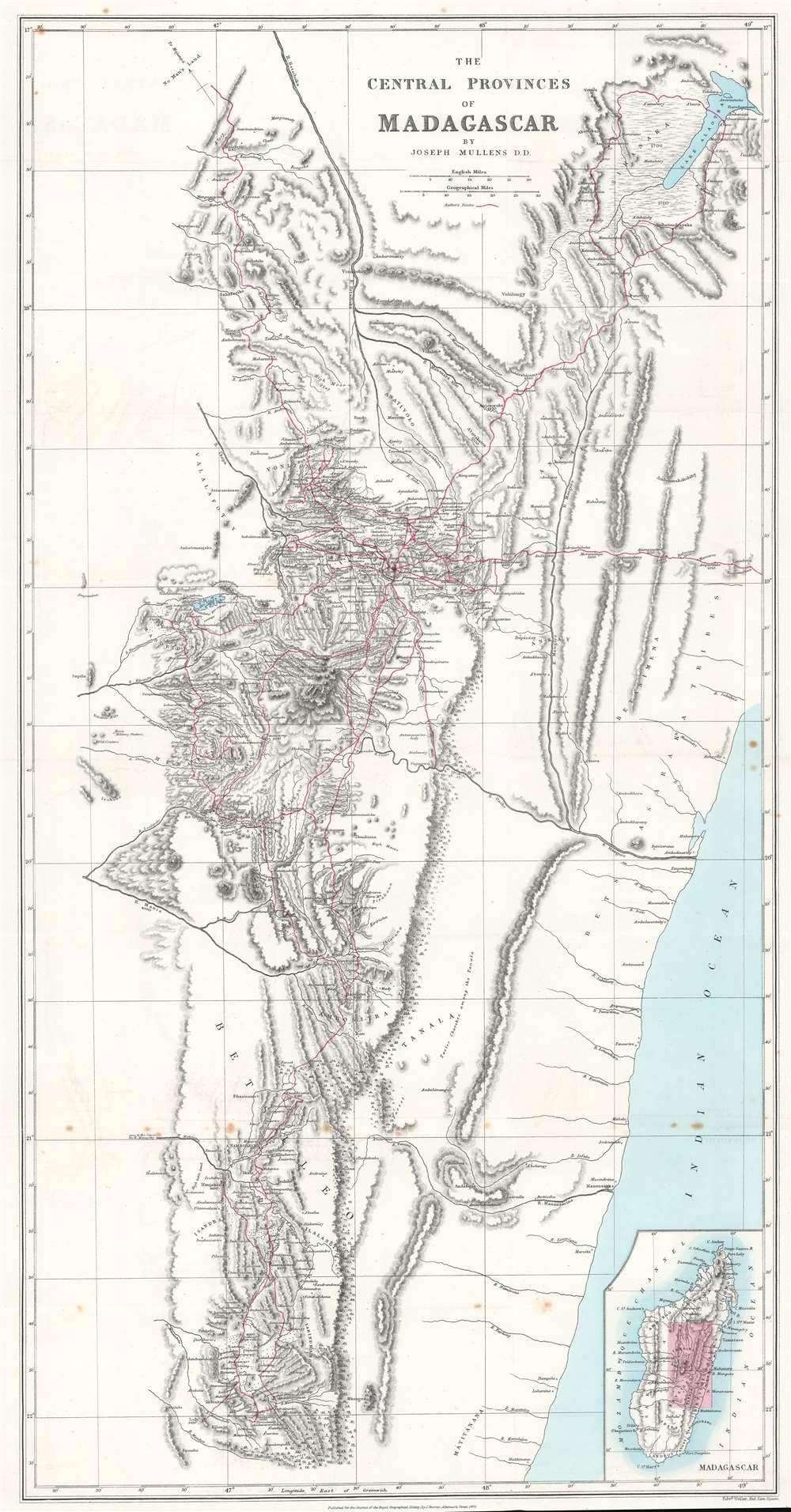 This is an 1875 John Mullens map of the central provinces of Madagascar - considered the first scientific survey of the central provinces around Antananarivo, the island's capital. Red lines trace Mullens's peregrinations as an official of the London Missionary Society. He was widely welcomed as a guest and given free rein to collect geographical and cartographic data. Throughout, cites, towns, and villages are identified for the first time on a modern map. Mountains are named and elevations given. An inset in the lower right illustrates this map in the context the entirety of Madagascar.

Mullens on the Creation of This Map

Mullens, in his paper for the Royal Geographical Society, discusses his motivations

Being deeply interested in this matter [the mapping of Madagascar], it was with peculiar pleasure that I accepted the invitation made to me, two years ago, to visit Madagascar on public duty. Aware that part of that duty would oblige my colleague and myself to visit thoroughly the central provinces of the island, we prepared to take advantage of our opportunities and add something at least to the knowledge of those provinces possessed by the geographical world. Had we known how great those opportunities would be, we should have endeavoured [sic] to obtain better instruments, and prepare ourselves more thoroughly to use them.

This map was created by John Mullens to accompany his article in the Journal of the Royal Geographical Society entitled 'On the Central Provinces of Madagascar'. It was engraved by Edward Weller and published by John Murray. The map appears rare. The OCLC has but one listing - at the Staatsbibliothek zu Berlin. A second example, not in OCLC, is part of the collection at Princeton University. Scarce to the market.

Joseph Mullens (September 2, 1820 - July 10, 1879) was an English missionary. Born in London, Mullens studied at Coward College (a dissenting academy that trained nonconformist ministers, i.e. ministers that did not conform with the Church of England) and graduated in 1837. He continued his education at the University of London (which was affiliated with Coward College) and graduated in 1841. Then, he continued his education in Edinburgh with the intention of working in India with the London Missionary Society (LMS). Mullens was ordained in September 1843 and soon after was on his way to India, where he joined the mission of Swiss missionary Alphonse François Lacroix near Calcutta. He married Lacroix's daughter, Hannah Catherine (who was fluent in Bengali), on June 19, 1845. Mullens continued to rise through the missionary ranks and returned to England on leave in 1858. A gifted publicist, throughout his career Mullens advocated for Protestant missionaries in general, not only those of the LMS. He returned to India in 1860, not long after a conference of Protestant missionaries in Liverpool. His wife Hannah died in India not long after their return, on November 21, 1861. Mullens was named joint foreign secretary for the LMS in 1865, and soon took a tour of LMS missions in China and India. He became the only foreign secretary in 1868. He toured the United States and Canada promoting the LMS in 1870. Mullens toured LMS missions in Madagascar in 1873. In 1879, while accompanying two inexperienced missionaries on a trip to Lake Tanganyika who were to replace the deceased incumbent there, Mullens fell ill and died. He was buried at a mission at Mpwapwa. Learn More...

Mullens. J., 'On the Central Provinces of Madagascar', The Journal of the Royal Geographical Society Vol. 45, (London: John Murray) 1875.