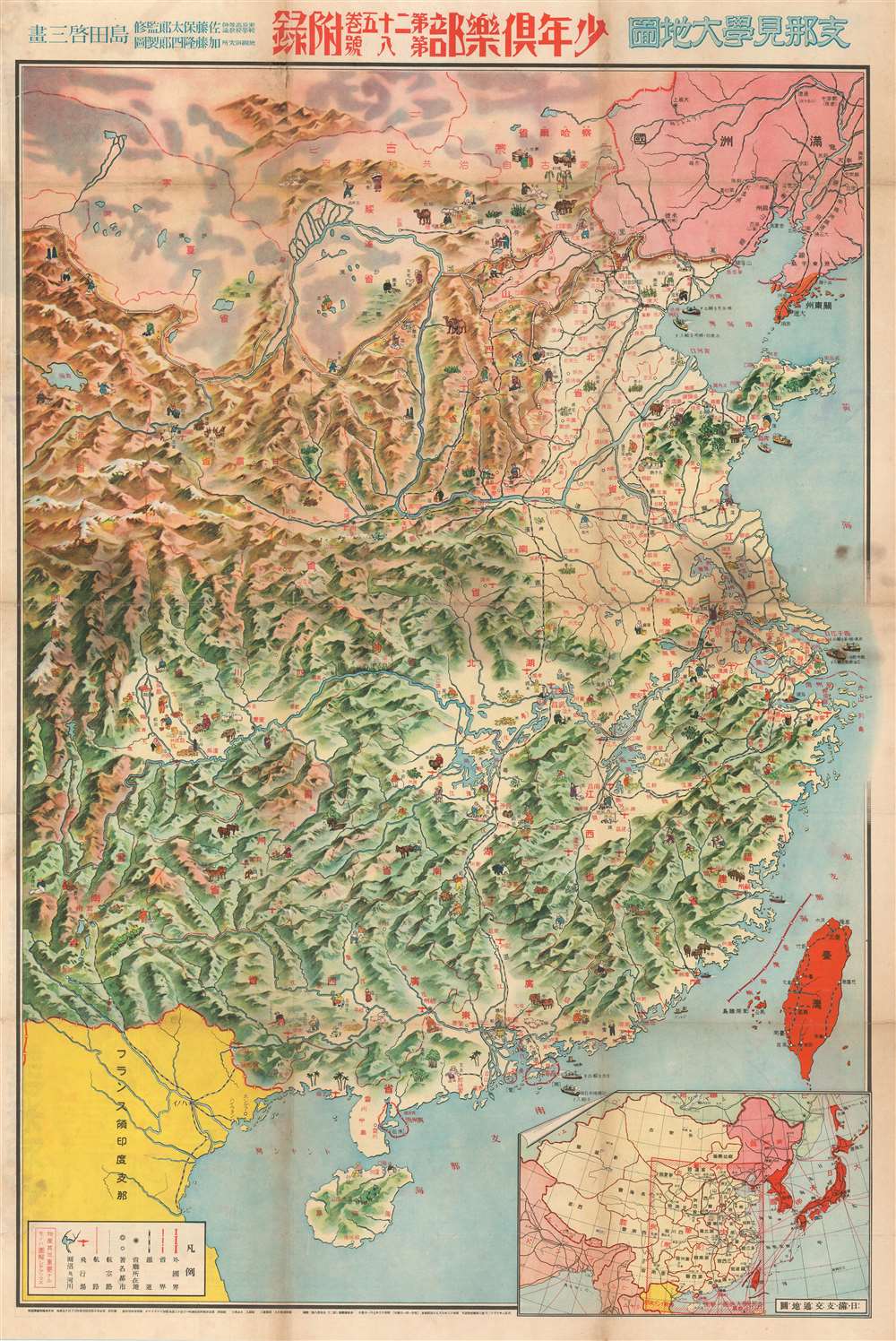 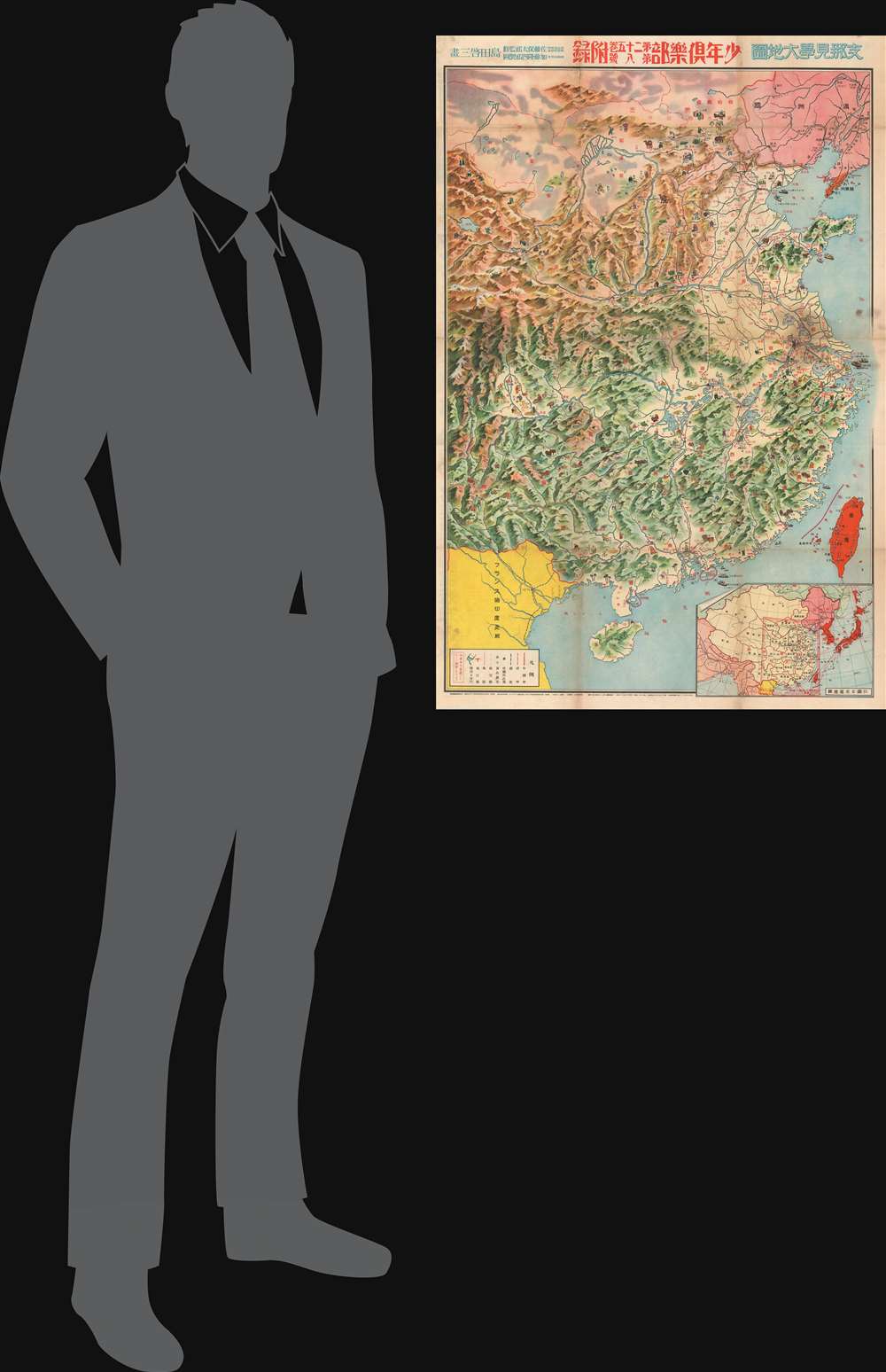 This is a rare 1938 (Showa 13) World War II or Second Sino-Japanese War manga style propaganda map of China by a team of artists, printers, and editors led by Satō Yūtarō (佐藤裕太郎). Published for the magazine Youth Club (or Shōnen Club, 小年俱樂部), this map was meant to educate Japanese children about China and justify Japan's war there.

The map is designed to lionize Japanese achievements during the 1937-1898 invasion of China. In Nanjing, recently the site of one of the worst atrocities of the war, a 'happy' Chinese man flies the quinta-color Chinese Republic National Flag (1912 – 1929), which had been replaced by the Guomindang-led Nanjing government and then revived by the Japanese to represent the puppet 'Reformed Nanjing government' (維新政府). In Beijing, a Japanese soldier holds a Chinese child who carries the Japanese flag. Nearby a Chinese civilian holds the quinta-color puppet regime ensign. A simple legend notes the meaning of symbols on the map, while the main resources and industries in different parts of China are indicated. An inset at bottom-right shows the area covered in relation to the rest of East Asia. That this map was intended for Japanese schools is indicative of the increasing militarization of youth and of popular culture in the early days of World War II.

Although determined to resist the Japanese, Chiang was eager to eliminate the domestic threat from the Communists first while also buying time to modernize his armies and gain better control over his generals, most of whom were semi-independent warlords. These plans were disrupted when Chiang was kidnapped by one of his own generals in December 1936 and forced to enter a united front with the Communists. Now forced to turn his attention towards a war with Japan, it was a matter not of if but when a war with Japan would come.

After their rapid victories at the start of the war, by mid-1938 Japan was reaching an impasse. Years of military modernization and propaganda had laid the groundwork for the successful first phase of the war, but Japan simply lacked the resources and manpower to occupy the vast territory of China. It was hoped that further victories and capture of major cities would force Chiang to surrender, and so Japanese armies took city after city along the coast and down the Yangtze River. For its part, China had scored a surprise victory at the Battle of Tai'erzhuang in the spring of 1938, slowing Japan's advance, and engaged in grand-scale scorched earth tactics, most famously blowing up the dikes on the Yellow River, flooding thousands of kilometers of land, killing several hundred thousand civilians and Japanese troops, and restricting the possible paths of Japanese advance.

Chiang set up a temporary headquarters in Hankou (Wuhan) while preparations were made in Chongqing. Japanese commanders hoped that another major victory would demoralize Chinese forces to the point that Chiang would surrender. With the extra time provided by the Yellow River floods, Chiang prepared a defense of Hankou and the wider middle Yangtze region. In June 1938, just before this map was published, the Japanese began their attack in earnest, quickly capturing Anqing, Jiujiang, and several strategically important railways. However, they ran into increasingly stiff resistance as the campaign wore on, while also contending with guerilla attacks and surprise counter-attacks deep behind the front line. A campaign was also launched to cut off Chiang's supplies by invading and occupying Guangzhou, which diverted resources from the main battle near Hankou. In the end, the Japanese occupied both Hankou and Guangzhou, but at a high cost and without achieving their goal of forcing Chiang to surrender.

Youth Club (少年倶樂部) was a monthly magazine for boys published from 1914 – 1962 by Dai Nippon Yūbenkai Kōdansha (大日本雄辯會講談社, now known simply as Kōdansha). It was an important contributor to the birth of mass youth culture in Japan. Along with Youth Club, Kōdansha published a number of other magazines, including Women's Club (婦人倶樂部) and King (キング), and had become a major shaper of Japanese culture and public opinion by the 1930s, controlling 70% of the magazine market.

This map was published as an addendum to Youth Club (小年俱樂部) magazine, Vol. 25 No. 8. It was drawn by Shimada Keizō (島田啓三), drafted by Kato Takashiro (加藤隆四郎), edited and published by Sutō Kenzō (須藤憲三) of Dai Nippon Yūbenkai Kōdansha (大日本雄辯會講談社), and printed by Ei Teizō (日永悌三) of Yukosha (株式會社有恆社). The process of producing the map was supervised by Satō Yūtarō (佐藤裕太郎), a teacher at the Tokyo Higher Normal School (東京高等師範學校). It was printed on June 8, 1938 (Showa 13) and issued on July 1. It is only known to be held by the National Museum of Taiwan History and is scarce to the market.

Satō Yasutarō (佐藤裕太郎; March 5, 1893 – March 7, 1977), or Satō Yūtarō, was a Japanese educator active in Tokyo during the Taisho and Showa Eras. During and just prior to World War II, he worked with the Japanese Youth Club (少年俱樂部), a popular magazine which published several important manga maps of East Asia. After the war, Yasutarō became a professor at Tokyo University of Education and later, the the Senshu University. Learn More...


Kato Takashiro (加藤隆四郎; fl. c. 1930 - 1943) was a Japanese cartographer and illustrator who made several maps of China and Asia during World War II, often appearing in magazines published by Kodansha (講談社). Learn More...


Keizo Shimada (島田 啓三; May 3, 1900 - 1973) was an early Japanese mangaka (漫画家), best known for his comic The Adventures of Dankichi, serialized in Youth Club (小年俱樂部) magazine, published by Dai Nippon Yūbenkai Kōdansha (大日本雄辯會講談社). The comic, based around the adventures of a young boy shipwrecked on a remote island in the South Pacific, was similar to The Adventures of Tintin. Like Tintin, it was later criticized for celebrating imperialism and denigrating other races. Dankichi also resembled its contemporary, another pioneering manga, Tagawa Suihō's Norakuro, in that both became a tool for propaganda during the Second Sino-Japanese War (World War II). Learn More...