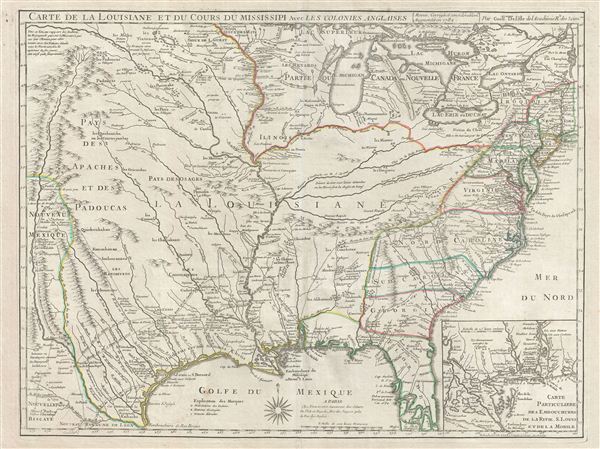 A foundational map and the first to name 'Texas'.

A foundational map and one of the most important illustrations of North America ever published, this the 1782 Dezauche edition Guillaume De L'Isle's influential Carte de la Louisiane et du Cours du Mississipi. Originally issued in 1718, this map is the main source of all later maps of this region and includes a number of significant firsts, including the first printed notation of 'Texas' (the Mission de los Tiejas, stablie en 1716), the first large-scale map of the lower Mississippi, the first cartographic appearance of New Orleans (which was founded in 1716), and the first credible attempt to identify the routes of many great explores including De Soto (Moscoso), La Salle, Ponce de Leon, St. Denis, Tonti, and others. This edition, revised an updated by Dezauche in 1782, further includes new information regarding the english Colonies in North America at the conclusion of the American Revolutionary War – one year before the United States was officially recognized by the British (1783).

A careful examination of this map reveals much of De L'Isle's political agenda through his carto-advocacy for French interests. Here the sprawling territory of Louisiana (rimmed in yellow) stretches from the Rio Grande, inclusive of then Spanish Texas eastwards as far as the Apalaches (Appellation Mountains). Frances's northern Territories, 'Canada ou Nouvelle France' (rimmed in red), extend southwards as far as the Illinois River and eastward to the Appellation Mountains, inclusive of all five Great Lakes as well as the northern Hudson Valley and Lake Champlain. This political configuration is particularly interesting when considered within the context of the thriving fur trade. Here France dominates the fur-rich northern part of the continent and the Mississippi River, firmly located in the heart of Louisiana, offers easy access to the French port of New Orleans and a route to French markets in europe.

Dezuache's updates to this map include a redefinition of the southeastern part of the continent. The British colonies of North and South Carolina, Georgia, and Florida are formally recognized with distinctive borders clearly in line with French colonial ambitions in the region. The newly established colony of New Orleans is noted and further features in an inset detail in the lower right hand quadrant. The detail, entitled Carte Particulere des embouchures de la Rivie. S. Louis et de la Mobile covers from the Mississippi eastward past Lake Pontchartrain and New Orleans to the entrances of Mobile and Pensacola Bays. Numerous additional place names were also added all along the eastern seaboard. Florida is curiously represented with the Baye du S. espirit leading to a network of inland water passages opening into the Atlantic.

In addition to numerous later states and editions of the map published by De l’Isle and his successors, this map was pirated by other cartographers and was the basis for maps by Homann, Moll, Senex, Seutter and others. The present example, reissued by Dezauche, a successor of De L'Isle, represents the second state of the original plate. It was published in J. Dezauche's 1789 reissue of G. De L'Isle and P. Buache's Atlas Geographique et Universel.