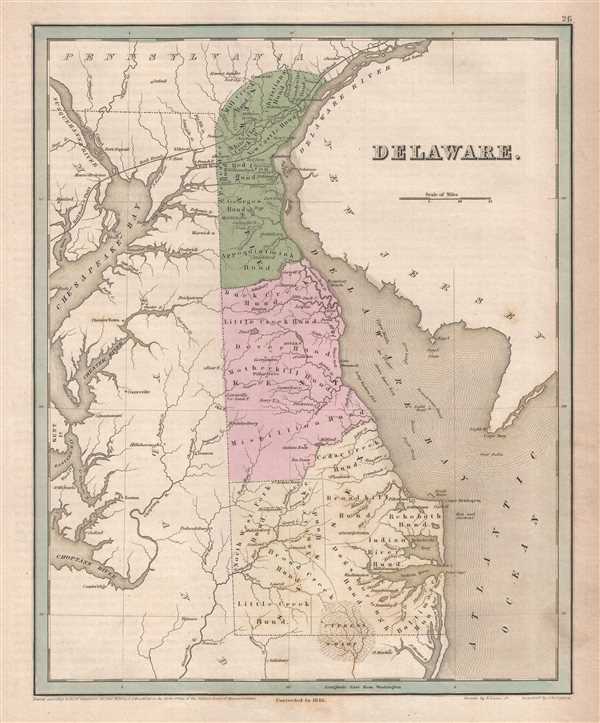 Features the Chesapeake and Delaware Canal, which remains a vital link in North Atlantic trade to this day.

This is an 1846 Thomas G. Bradford map of Delaware. The map depicts the region from the Susquehanna River and Chesapeake Bay to New Jersey and from Pennsylvania and New Jersey to Maryland and the Atlantic Ocean.

When construction began on the Chesapeake and Delaware Canal, business owners in New Castle, Delaware became concerned. They knew the new canal would pose a threat to their community and their businesses and knew that they needed to respond. They did so by chartering a railroad company. The New-Castle and Frenchtown Turnpike Company was chartered on January 24, 1809 in Delaware and soon after in Maryland and the company opened a turnpike in 1815 and 1816 from New Castle, Delaware to Old Frenchtown Wharf, Maryland, on the Chesapeake Bay. The Maryland General Assembly authorized the company to replace the turnpike with a railroad in 1828 and change its name to the New-Castle and French Town Turnpike and Rail Road Company with similar laws passed in Delaware. The two separate companies in Maryland and Delaware merged in 1830, forming the New Castle and Frenchtown Turnpike and Rail Road Company and opened their new railroad in 1831. A series of mergers occurred in the following decades, as was very common with railroad companies. Today, parts of the original New-Castle and Frenchtown route are still operated by Norfolk Southern.

Delaware is divided into three counties, as it is today, and each county is divided into hundreds (which are labeled). Hundreds were used as tax reporting and voting districts until the 1960s, but today they serve no administrative purpose and are only used in real-estate title descriptions today. Numerous cities and towns throughout the state and the region are labeled, including Dover, Delaware City, and Wilmington. Both Delaware Bay and Chesapeake Bay are labeled, along with the Delaware River.

This map was drawn by Fielding Lucas Jr., engraved by George Boynton, and published in the 1846 edition of Bradford and Goodrich's A Universal Illustrated Atlas.


Fielding Lucas Jr. (September 3, 1781 - March 12, 1854) was an American cartographer, chartmaker, and publisher active in Baltimore during the first half of the 19th century. Born in Fredericksburg, Virginia, little is known of Lucas's family and early life, but his lineage seems to have been established in Fredericksburg from at least the mid-1700s. Lucas founded Lucas Brothers, one of America's first stationers located at 116 East Baltimore Street, in 1804 and later, in 1806, he became the Baltimore manager of the Philadelphia based publishing firm Conrad, Lucas, and Company. Lucas is also known to have worked with the Matthew Carey firm in Philadelphia. Lucas entered the map trade around 1814, when he published an atlas of the United States - similar to, but in direct competition with, Matthew Carey, a matter which soured an otherwise profitable friendship. In 1825, Lucas also produced a world atlas. Over the course of his career, Lucas published several smaller atlases and numerous independent issue maps, including an important nautical chart of the Chesapeake and Delaware Bays. Many of his maps were engraved by H. S. Tanner, but he also worked with Robert Mills (Atlas of South Carolina) and others. Lucas attained considerable social prominence as a patron of the arts and philanthropist. He was a member of the committee that helped build Baltimore's Washington Monument and was one of the founding members of the Boston Harmonic Society and the Maryland Institute for the Promotion of Mechanical Arts. During the War of 1812, Lucas enlisted in Captain John Kanes' Company, 27th Maryland Regiment, although little is known of his actual service. From 1827 he served as a director of the Baltimore and Ohio Railroad and, later, as director of the Baltimore and Rappahannock Steam Packet Company. He died in Baltimore on March 12, 1854. (Foster, J. W., Fielding Lucas, Jr., Early 19th Century American Publisher of Fine Books and Maps, 'American Antiquarian Society', October 1955, Volume 64, Part 2, 162-212) Learn More...