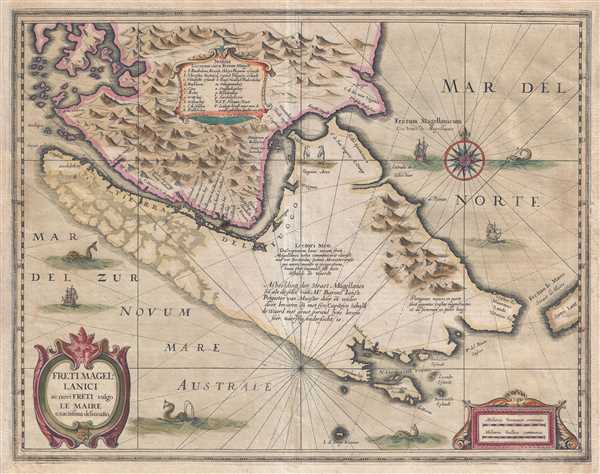 One of the most decorative maps of Tierra del Fuego and the Strait of Magellan.

This is a 1638 Jodocus Hondius and Jan Jansson map of the Strait of Magellan and Tierra del Fuego, the southernmost tip of South America from the golden age of Dutch cartography. The map depicts the region from mainland Patagonia to Tierra del Fuego, Cape Horn, and the South Atlantic Ocean. One of the most decorative maps of the Strait of Magellan, Hondius and Jansson must have consulted the most recent data available when creating this map, because several aspects of its cartography are extremely up-to-date. The most compelling addition is the depiction of Tierra de Fuego as an island, which was only confirmed by Admiral Jacques L'Hermite, who was also Dutch, in 1624. Hondius and Jansson also illustrate how the northwestern peninsula of Tierra del Fuego breaks up into islands, another recent discovery. The Le Maire Strait, part of the recently-discovered route around Cape Horn, is also labeled, and provided mariners with another option to the Pacific, instead of the winding and hazardous Strait of Magellan. This route, however, came with its own set of difficulties that plague shipping to this day. Even with the innovations included by Hondius and Jansson, not everything represented here is correct, or even on the right track. For example, one of the many captions includes a reference to Patagonian giants, a mistaken belief that its inclusion only perpetuates.

A table, situated near the top border slightly to the left of center, contains the names of seventeen locations along the Strait of Magellan, and the corresponding locations are identified by letters. Several locations are also noted on the mainland side of the strait. An illustration of two penguins, labeled Pinguini Aves, is included, as are numerous illustrations of galleons and sea monsters in the ocean surrounding Tierra del Fuego. An ornate compass rose is included on the right side of the map, and rhumb lines crisscross the map in multiple directions. A decorative title cartouche is situated in the lower left corner, while another cartouche in the lower right corner contains the scales.

This map was created by Jodocus Hondius and Jan Jansson and published in 1638.