1840 Perrot Comparative Chart of the Marvels of Nature - amazing color! 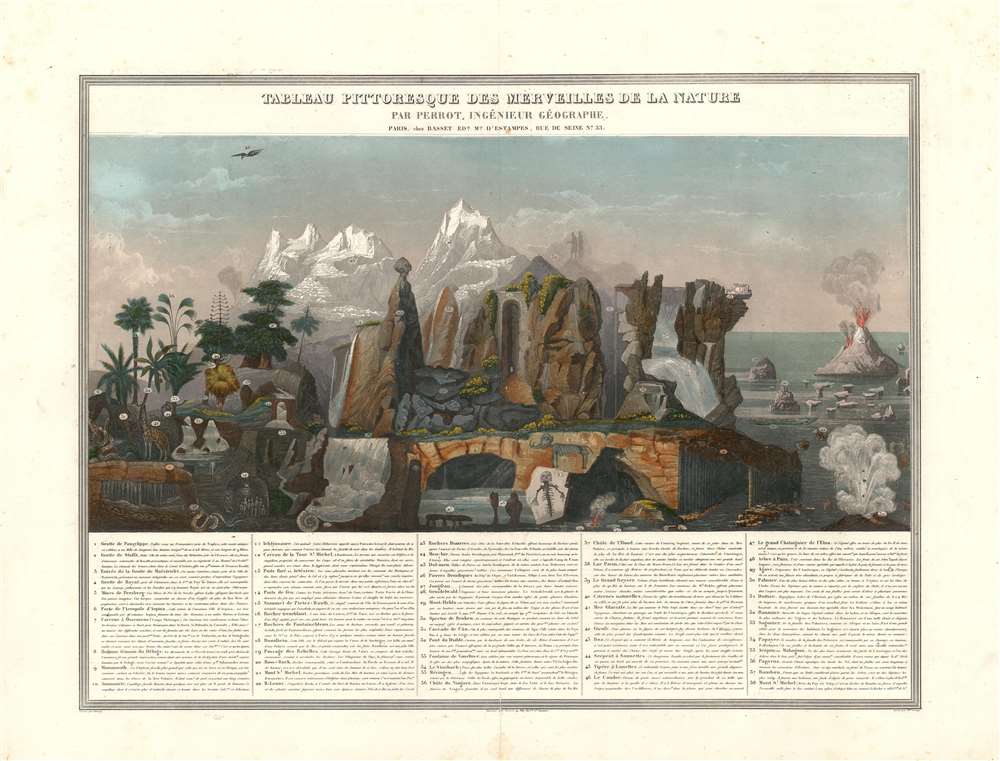 1840 Perrot Comparative Chart of the Marvels of Nature - amazing color!

This is a separate issue 1840 Aristide Michel Perrot and Sigismond Himely comparative chart illustrating the marvels of the nature - as they were understood in the 19th century. The present example is notable for its striking gouache color masterfully applied. The chart illustrates 58 numerically identified natural wonders, among them,A table, situated in the bottom quarter of the chart, bears the name, location, and a short description of each of these wonders - many of which are today forgotten.

This chart was compiled by Aristide Michel Perrot and published by Maison Basset in 1840. It was engraved in aquatint by Sigismond Himely, with the lettering engraved in copper by Mme. George, and printed in Paris by Fosset. Examples exist both in black and white and full deluxe color - as here - with the color variant being much rarer and far more desirable. The OCLC identifies only one example, at the British Library, it is unclear if this example is color and the more common black and white issue.


Sigismond Himely (June 7, 1801 - 1872) was a Swiss painter, viewmaker, acquaint engraver active in Paris during the middle part of the 19th century. Hinley was born in La Neuveville, Bern, Switzerland, but moved to Paris to study painting with Copley Fielding (1787 - 1855) and Jean-Victor Bertin (1775 - 1842). He exhibited in the Paris Salons between 1824 and 1869. He is known for his work engraving aquatints for English watercolorists and his names is associated with numerous historical views, city bird's-eye panoramas, architectural illustrations, and ethnographic images, among them rare illustrations of Asia, Africa, and the Americas. Learn More...