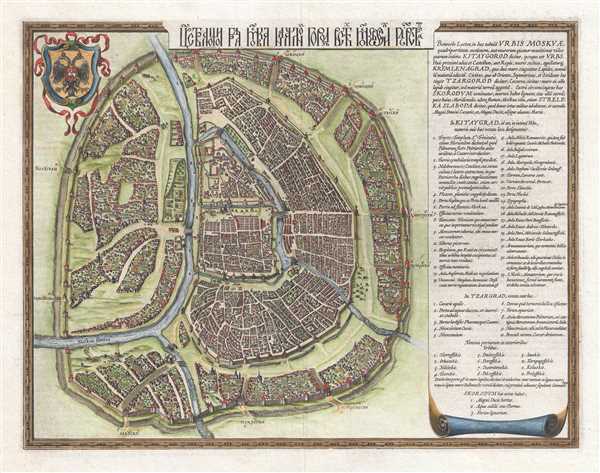 The most beautiful example of Blaeu's city map of Moscow.

This is a 1642 Hessel Gerritsz city map or plan of Moscow, Russia. With the Kremlin at its center, the map depicts the city from the city from the Moscow River to Zemlyanoy Gorod, which is surrounded by ramparts and a moat. This historical district in Moscow corresponds to the area between the Boulevard Ring and the Garden Ring roads in modern Moscow. An index situated along the right border corresponds with nearly sixty different numerically labeled locations throughout Moscow's three districts. A text, in Latin, is included above the index.

It is believed that this map is derived from survey that was ordered by Boris Fyodorovich Godunov, who ruled the Tsardom of Russia as de facto regent from c. 1585 until 1598 and then as the first non-Ririkid tsar from 1598 until 1605. The original plan is not believed to have survived.

It is commonly believed that this map was not published in a Blaeu atlas until 1662, though earlier editions of Gerritz's Kremlenagrad map are known to have been published in Braun and Hogenburg's Civitates orbis terrarium, which does not rule out the possibility that Gerritsz's plan of Moscow was also published in Hogenburg's atlas. When we obtained the present example, the seller claimed that it was extracted from a 1642 Dutch edition of Blaeu's atlas, which would be an edition of Blaeu's Tooneel des Aerdrycks. Through our research, we have concluded that it is undeterminable exactly from which atlas this example was extracted; it could have been printed in a 1642 edition of Blaeu's Tooneel des Aerdrycks or in a 1662 edition of Blaeu's Atlas Maior. As a side note, this is the most beautiful example of this map we have seen to date or could imagine and, for the discriminating collector, this is the one to buy.