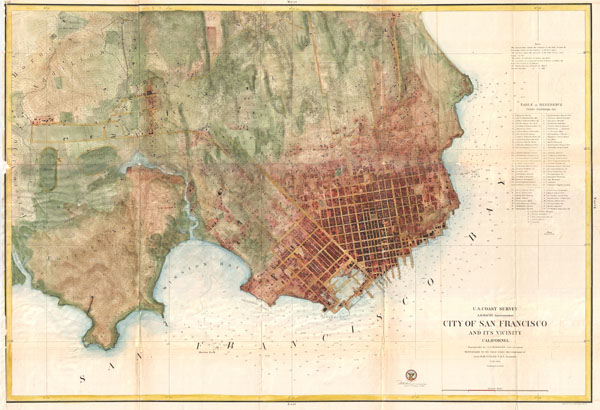 The work of the coast survey around the city of San Francisco was completed in 1852 and first known U.S. C. S. plan of the city and its immediate vicinity was published in the same year. Rumsey suggests that the actual city plan was taken from an earlier map produced Cook and Le Count, and Vogdes suggests that the interior topography is drawn from the Eddy's official map of San Francisco. This first Coast Survey Chart of San Francisco was oriented to the north and covered a considerably small area than the map offered here. The above chart was issued in 1857 to replace the 1853 chart and account for the rapid urbanization of the San Francisco vicinity. Although much of the actual topography is based on the original 1853 map, there are a number of important updates and expansions, especially in the extreme eastern and southern quadrants. The notation of the Union Race Course, the Pioneer Race Course, the Road to San Jose, and the Rancho de San Miguel are but a few such additions. Furthermore, this map also features the addition of a 'Table of References' to the right of the main map. This numbered table identifies a number of important buildings throughout the city including churches, theaters, hotels, fire houses, hospitals and government buildings.

The trigonometrical survey for this map was prepared by R. D. Cutts. The topography was accomplished by A. F. Rodgers and the hydrography by R. M Cuyler. Engraved by Julius Bien. All work was produced under the supervision of A. D. Bache, one of the most influential superintendents in the history of the U.S. Coast Survey.


Augustus Frederick Rodgers (January 1, 1829 - December 9, 1908) was an American military officer active in California with the United States Coast Survey. He was born in Washington D.C., the son of John Rodgers (1812 - 1882), and American Commodore who notably defended Baltimore during the War of 1812. Rodgers was appointed to the US. Coast Survey in 1847 and assigned to the task of overseeing the survey of the California coast. His Coast Survey work included mappings of California, Oregon, and Washington coasts, Alaska, the Hawaiian Island, and the Philippines. He remained active with the survey in San Francisco, California, until his death in 1908. Learn More...

Report of the Superintendant of the United States Coast Survey, Washington, (1859 edition).