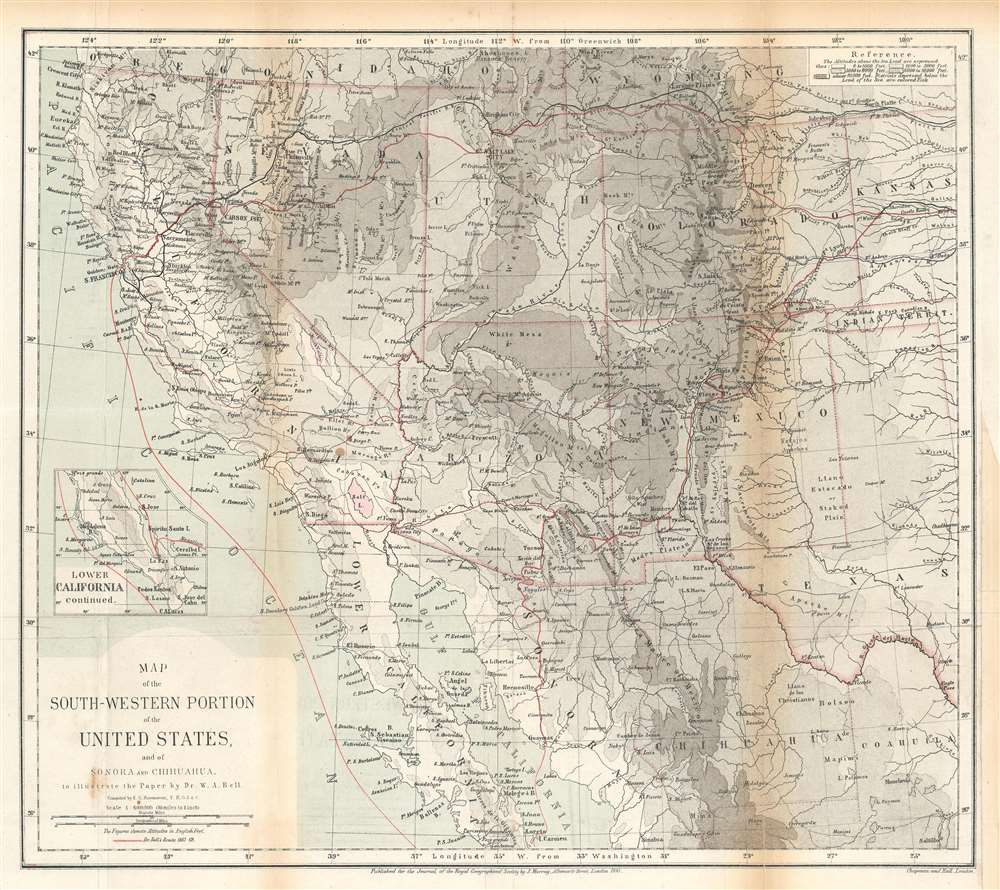 Follows the founder of the Denver and Rio Grande Railroad.

This is an 1870 Ernst Georg Ravenstein map of the southwestern United States. The map traces William Abraham Bell's travels in the region, including his time with the Kansas Pacific Railroad Survey. A red line illustrates Bell's peregrinations from Kansas west to the Pacific Ocean, his voyage up the Pacific coast to San Francisco, and his overland trek back to Kansas. From Kansas, Bell headed east where he booked passage across the Atlantic to England. After the expedition Bell co-founded the Denver and Rio Grande Railway.

A highly detailed piece compiled by Ravenstein, cities, towns, forts, and other settlements are labeled throughout the region, including Denver, Albuquerque, Taos, Santa Fe, San Diego, San Luis Obispo, San Francisco, Carson City, and Salt Lake City. Mountains ranges and individual peaks, including Pike's Peak near Colorado City, are also identified. Rivers and lakes are illustrated in surprising detail. An inset map along the left border illustrates the southern portion of Baja California and Bell's sea voyage around the peninsula.

William Abraham Bell, the Kansas Pacific Railroad, and His Trek Across the United States

William Abraham Bell (April 26, 1841 - June 6, 1921) was an English physician and a well-known photographer of the American West. Bell arrived in the United States in 1867, intending to study homeopathy in St. Louis. Instead, Bell joined the Kansas Pacific Railway's survey to identify the best railroad route between Kansas and California. The expedition's geographer recommended Bell to be the expedition's photographer, even though Bell had no photography experience. He undertook a two-week crash course and then went off to meet the expedition in western Kansas. As an aside: history best remembers Bell for a photograph of a mutilated U.S. soldier he took in Kansas in 1867 that was published in Harper's Weekly. This photograph caused the Kansas Pacific to fear that Bell hoped to make money off the photographs he took while on the expedition, so they hired another photographer. However, the expedition split into two parties, and Bell continued south with that party until it reached Camp Grant, about six months after he left Kansas. There, he abandoned his photography equipment (including all the negatives) and headed south to the Mexican coast on horseback. From here, Bell took a ship to San Francisco and then traveled overland back to Kansas, and from there back to England. His travels inspired him to invest in the American west and in 1870 he partnered with William Jackson Palmer (1836-1909) to found the Denver and Rio Grande Railway.

This map was compiled by Ernst Georg Ravenstein, engraved by Chapman and Hall, and published by John Murray for the Royal Geographical Society. It accompanied Bell's article entitled, 'On the Basin of the Colorado and the Great Basin of North America' published in 1870 for Volume 39 of The Journal of the Royal Geographical Society. Three examples are cataloged in OCLC and are part of the institutional collections at the Newberry Library, the University of Kansas Archives, and Texas Tech University. A fourth example is part of the institutional collection at Princeton University.

Bell, W. A., 'On the Basin of the Colorado and the Great Basin of North America', The Journal of the Royal Geographical Society Vol. 39 (London: John Murray) 1869.