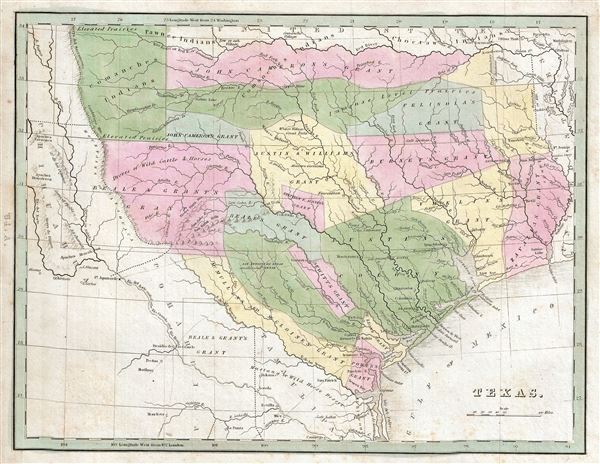 A rare discovery, this is Thomas G. Bradford's 1835 map of the Republic of Texas. This important map is considered the first specific map of the Republic of Texas to appear in an atlas. The map covers the original claims of the Republic of Texas from the Nunces River to the Red River and from the Mountains of Anahuaca to the Sabine River. It does not extend Texas claims to the Rio Grande - as would later maps, but does include the river as the map's southernmost and westernmost points, a fact that leads us to believe that Bradford was aware off potential greater territorial claims. This offering of the map includes a single page of descriptive text.

Cartographically Bradford derived this map primarily from the 1830 map of Steven F. Austin, the only readily available source at the time. Austin spent nearly six years compiling data on Texas before publishing his important map in Philadelphia. His intentions with the map were both patriotic and political - Austin wanted to bring Texas colonization to the attention of American public. Bradford's 1835 map illustrates the success of his efforts. Where Austin's 1830 map identifies only three Mexican land grants: his primary grant in 1827, his secondary grant entitled 'Austin's Colony,' and De Witt's Grant. Bradford's map, by contrast illustrates a total of 15 land grants, including those of Williams (and Austin), McMullin and McGloines, Powers, De Deon, Vhelin, Zavalla, Burnet, Beale and Grant, John Cameron, and Felisola. The enormous success of Austin's drive to populate Texas with English speaking settlers eventually led to the disputes that inspired the succession of Texas and ultimately the Mexican American War.

Another important difference between this map, by Bradford, and Austin's map is the depiction of variant borders relating to the Arkansas Boundary Controversy. The map illustrates two boundaries, the boundary established by the February 28, 1819 Adams-Onis Treaty, roughly where the present day border now stands, and another boundary further west identified as 'Proposed boundary of Arkansas.' This rarely illustrated dispute sprang from confusion by the Arkansas Territorial legislature which, in 1828, established Miller County within the borders of what was then Spanish America. The disputes continued well into the Republic of Texas Period until 1836, one year after this map was made, when Texas created an overlapping Red River County. When Arkansas was formally admitted to the Union as the twenty-fifth state, its borders follows those established in 1819.

This map exists in two states, published in four issues. The first three issues are the same state and were printed from the same plate. The 1835 first edition of Bradford's Comprehensive Atlas, by Ticktor, did not contain a map of Texas. Nonetheless, some issues of this first edition apparently do contain a map of Texas, as well as a textual description of Texas, inserted as plate numbers 61A (the map), 61B, and 61C (these last two pages represent a textual analysis of the Republic of Texas). The odd numbering system suggests that the map and the text pages were either printed separately and added as supplements to the first edition or tipped into unsold stock late in the year. With the second issue of the atlas, by American Stationers, the map of Texas and its two text pages were included. Another issue of the atlas, also by American Stationers, appeared with the map plate unaltered but with only one page of text - this represents the present example. A second state of the map, including updated geography appeared in the 1837 fourth issue of the Comprehensive Atlas.

The map was published as plate no. '64 A' in Thomas G. Bradford's 1835 Comprehensive Atlas Geographical, Historical and Commercial. Bradford's atlas, published in 1835 was an important work on many levels. First, it was one of the first American atlases to follow an encyclopedic format, offering readers extensive geographical and statistical tables to supplement the maps themselves. Second, it was published in Boston and influenced the city's rise as a publishing center later in the 19th century (at the time most publishing in the United States was restricted to New York and Philadelphia). Third, this atlas was the first to contain a separate and specific map showing the Republic of Texas. Fourth and finally, Bradford's atlas in some instances broke the Euro-centric mold regarding atlas production. Among other things, Bradford focused his atlas on the Americas and abandoned the classical decoration common in European atlases in favor of a more informational and inherently American approach.

Bradford published this atlas in several editions and with various partners. The first edition was published by William D. Ticktor and did not contain the iconic Republic of Texas map (although we have in fact seen Ticktor examples with a Texas map, suggesting, against conventional wisdom, that there may have been two Ticktor editions). The second official edition, published in the same year by the American Stationers Company, was the first to contain the Republic of Texas map, which is based on Austin's map, with two pages of descriptive text. A third edition was issued in 1836, also by American Stationers (though still dated 1835), and contained an unaltered Republic of Texas map with only a single page of descriptive text. A fourth edition appeared later, possibly 1837, and included an updated and revised map of Texas that replaces the old Mexican land grants with new inchoate counties. The maps from this atlas are an important addition to any collection focusing on early American cartography and Republic of Texas cartography.