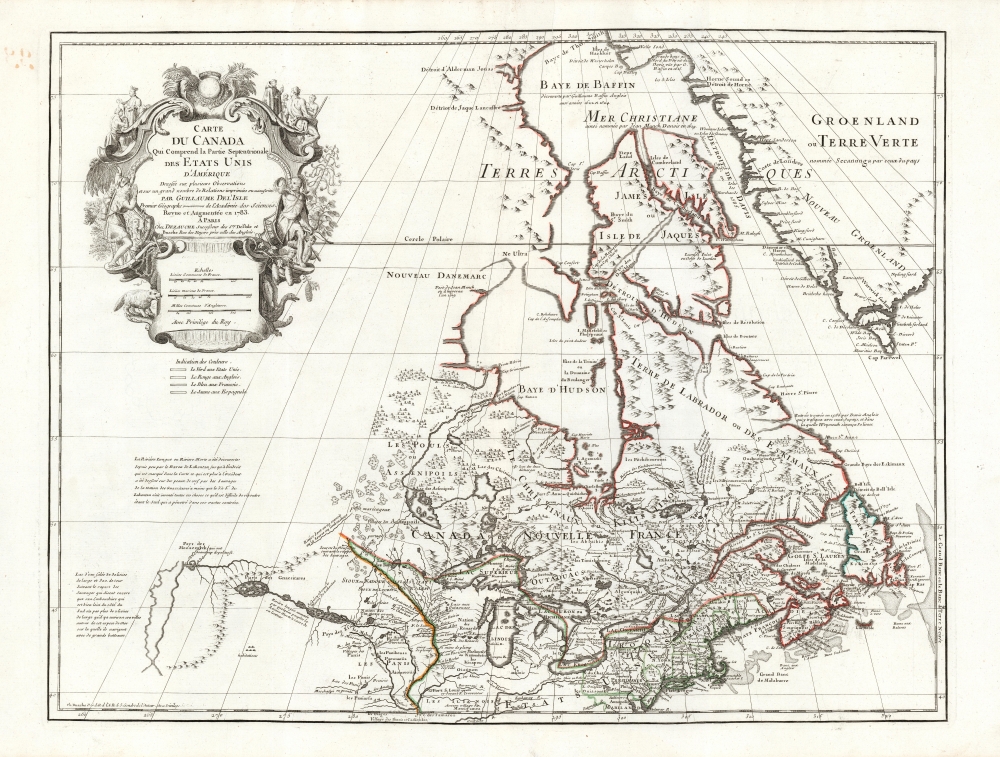 The Essential Mapping of Early 18th Century Canada, Updated to Reflect the Upheaval of Two Revolutions.
$2,700.00

This is the 1783 Dezauche issue of Guillaume de l'Isle's seminal map of Canada and the Northern United States. The map's reach extends from Maryland and the Chesapeake up to Baffin Bay, including a superb depiction of the Great Lakes and Canada. De l'Isle's map first appeared in 1703, at which time it was the most sophisticated cartographic representation of this region yet published, referencing various elements from the most recent explorations including the Jesuit Relations, Pierre Le Moyne d'Ibervile, Pierre Le Sour, and Baron de Lahontan.

A Topical Update to an Essential Map

At the close of the American Revolutionary War, in 1783, Dezauche, who had inherited De l'Isle's business from his immediate successor Buache, updated the classic 1703 map to include the borders of the newly-formed United States as established in the Treaty of Paris. United States territory is shown to begin in the northwest at the sources of the Mississippi. The border then extends eastward through the Lake of the Woods to bisect Lake Superior, Huron, Erie, and Ontario (leaving Michigan or, as here, 'Lac des Illinois,' fully in U.S. territory). Eastward of the Great Lakes the border passes northwest along the St. Lawrence before cutting east to divide Lake Champlain. It then follows the headlands to the Riviere Sainte-Croix which exits into the Atlantic. To the west the United States border is set along the Mississippi River.

One of this map's most intriguing elements is De L'Isle's treatment of the speculative explorations of the Baron Louis Armand de Lahontan, which dominate the lower left quadrant. Lahontan (1666 - 1715) was a French military officer commanding the fort of St. Joseph, near modern day Port Huron, Michigan. Abandoning his post to live and travel with local Chippewa tribes, the Baron claimed to have explored much of the Upper Mississippi Valley and even to have discovered a river, which he dubbed the Riviere Longue or 'Long River.' He purported to have followed the river about half its length from its confluence with the Mississippi (the limit of his travels is marked 'Jusquicy est venue le Baron de Lahonton.' Beyond this point, Lahontan wrote of further lands along the river allegedly described by his guides. These included a great saline lake or sea (which De l'Isle included without clearly defining its bounds) and an extensive mountain range. De L'Isle expressed doubt about Lahontan's discoveries noting:

Nevertheless, Lahontan's information here was followed by many important cartographers of his day, Moll, Popple, Sanson, and Chatelain to name just a few. But by the time Dezauche was editing this map so scrupulously on the East Coast, far better geographical information had become available, and the Lahontan geography shown here was by 1783 a gross anachronism. Its preservation here is more a product of the authoritative nature of the map's geography of the East Coast than it is of any of its western features.

An Amended Cartouche Revealing the Impact of Two Revolutions

The decorative title cartouche in the upper left features stylized New World fauna, including a beaver gnawing at the map's scales. Missionaries are shown converting indigenous American Indians. All these features were preserved from De l'Isle's 1703 work. The 1783 iteration of the map included the correction to its title to name the United States. Furthermore, this map is revealed to have been further amended, and printed no earlier than 1789 (this state not in Tooley) as evidenced by the absence from the top of the cartouche of the French Fleurs de Lis, and the royal crown, which had become fatally unfashionable to display with the advent of the French Revolution.

This map was published in J. Dezauche's 1789 reissue of G. De L'Isle and P. Buache's Atlas Geographique et Universel. We see three examples of the complete work listed in OCLC. Perhaps twenty examples of the separate map are cataloged in institutional collections.