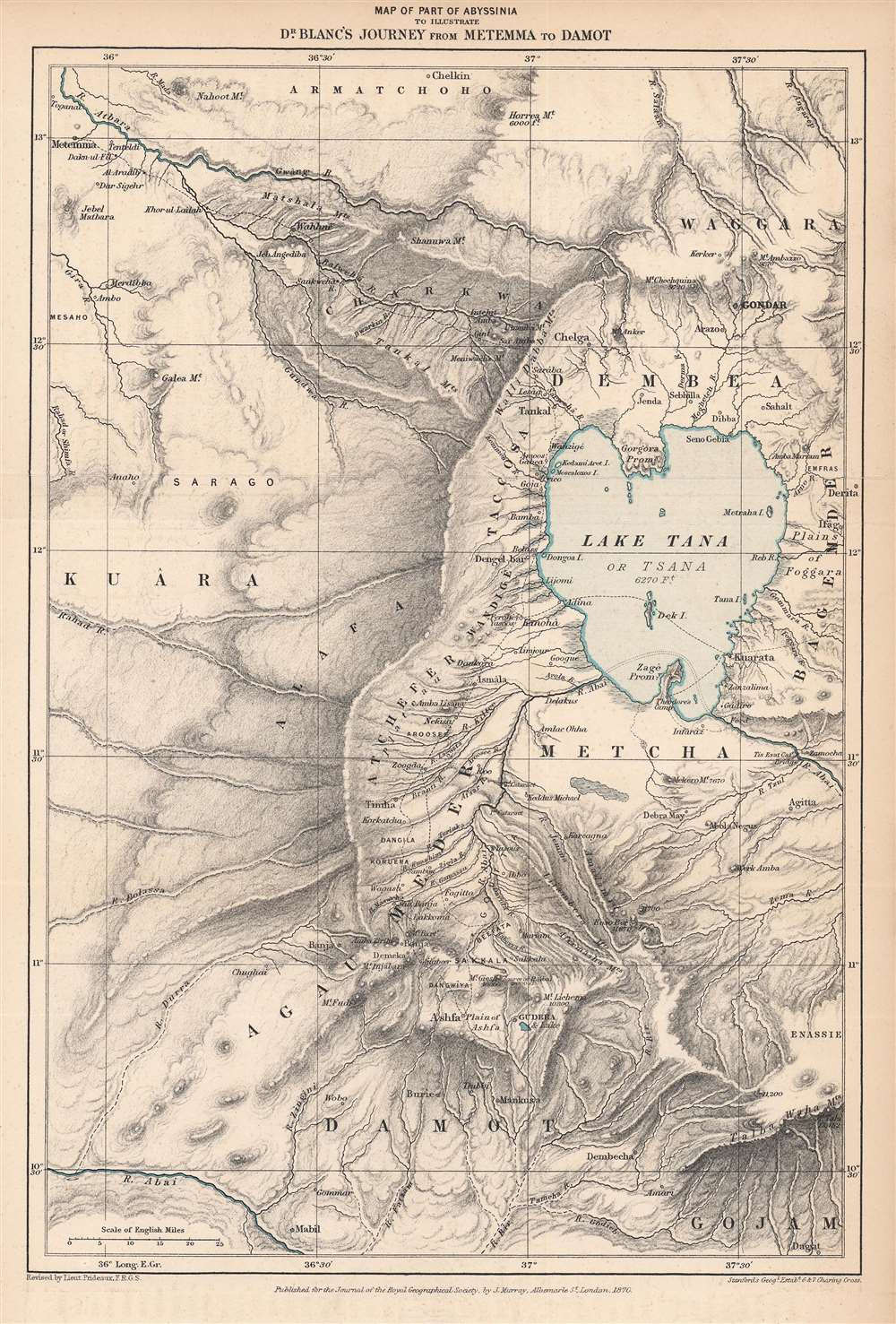 This is an 1870 Edward Stanford map of the Amara region of northwestern Abyssinia (Ethiopia) highlighting the route taken by Henry Blanc, one of the British subjects kidnapped by Ethiopian Emperor Tewodros II (r. 1855 - 1868), an act that prompted a punitive expedition by Great Britain in 1867 – 1868.

This map illustrates the travels of Dr. Henry Blanc through the mountainous Amhara region in northwestern Ethiopia around Lake Tana, the largest body of water in Ethiopia and the source of the Blue Nile. Blanc and the other captives spent considerable time at Zagé (Zege) and Kuarata (Qorata), including meetings with Tewodros, who rather enjoyed chatting with the British prisoners. In addition to its political importance (discussed below), the region is home to vital cultural sites, including tombs of Emperors, ancient churches, and monasteries.

Due to the lake and nearby scenic mountains, in particular the Simien Mountains, the area is today known as a tourist destination, and the city of Bahir Dar, a village on the southern shore of Lake Tana unworthy of mention when this map was made, has developed into a city of almost a million.

Tewodros II and the British Expedition to Abyssinia

Gondar towards top-right became the imperial capital in the early 17th century, initiating one of Abyssinia's 'golden ages'. The peaceful and prosperous 'Gondarine Period' came to an end in the mid-18th century when the 'Era of the Princes' (Zemene Mesafint) began, greatly weakening central power and empowering local rulers (ras). This internal division was challenged by Emperor Tewodros II. Although only partially successful during his lifetime, Tewodros II's moves towards centralization and modernization bore fruit in the decades after his death, when Ethiopia was one of a small handful of polities to maintain its sovereignty during the late 19th century 'Scramble for Africa'.

Tewodros II met a more tragic end, at the hands of the British. His centralization efforts had unsurprisingly engendered opposition from local rulers, while he also was fighting external conflicts against the Ottomans, Egypt, and Sudan. Tewodros appealed to European monarchs for military assistance, calling on their shared Christianity against Islamic enemies, but was mostly ignored. In a rash attempt to gain attention, in 1863 Tewodros kidnapped a pair of British missionaries, one of whom inadvertently challenged Tewodros's legitimacy by speculating on his heritage, then kidnapped more missionaries and a British Consul sent to negotiate the original pair's release. The British sent Hormuzd Rassam, an Assyrian Christian, as a negotiator and some progress was made towards a resolution, with the hostages relocated to nicer quarters at Qorata (here as Kuarata) on the east bank of Lake Tana. When another British negotiator (Charles Tilstone Beke) arrived, Tewodros became suspicious and reimprisoned the original hostages plus Rassam and his retinue, including Blanc.

In August 1867, Queen Victoria approved a military expedition to free the hostages, a major undertaking in the extremely difficult terrain of Ethiopia. To account for the expected hurdles, the commander chosen for the mission was Robert Napier, a military engineer with extensive experience in India and in the Second Opium War against China. Manning and supplying the large force, including forty-four elephants used to transport canons, required spending large sums of money, especially as the British aimed to buy food and supplies from locals rather than loot. Most of the campaign was simply a matter of traversing difficult terrain and negotiating with local powerholders, most of whom were already opposed to Tewodros. It took the British three months to reach Tewodros's fortress at Magdala, which Tewodros was himself marching towards, fighting skirmishes with resistant local powerholders along the way.

After a short battle outside Magdala, where the British captured the Ethiopians' formidable artillery, the defenders retreated into the fortress. Although Tewodros released the hostages (some of them having been mutilated beforehand) Napier demanded unconditional surrender and proceeded to bombard the fortress before launching an extremely successful assault. The British only lost two soldiers to some 700 Ethiopians, including Tewodros, who committed suicide as British closed in, using a pistol that had originally been a gift from Queen Victoria.

In the end, the expedition, the result of misunderstanding and inflated notions of violated honor, cost hundreds of thousands of pounds and gained little that could not have been won through diplomacy. Its greatest impact was on Ethiopian domestic politics; four years after the British left, one of their most reliable local allies, using weapons supplied by the British, subdued his opponents and established himself as Emperor Yohannes IV, achieving many of the aims that Tewodros had set out to realize. Under Yohannes IV and his successor, Menelik II, Ethiopia's territory grew, society and bureaucracy were modernized, and the empire fended off an Italian invasion (1895 -1896), earning the respect of major European powers.

Upon returning to England after his release, Henry Blanc wrote an account of his captivity along with a general background of the expedition and the situation in Ethiopia that had led to it (Narrative of Captivity in Abyssinia with Some Account of the Late Emperor the Late Emperor Theodore, His Country and People). Like many of the prisoners, Blanc admonished Tewodros's cruelty but expressed sympathy for his impossible political situation and felt that the decisions which led him into conflict with the British were the result of erratic behavior, driven by progressively worsening drinking and madness.