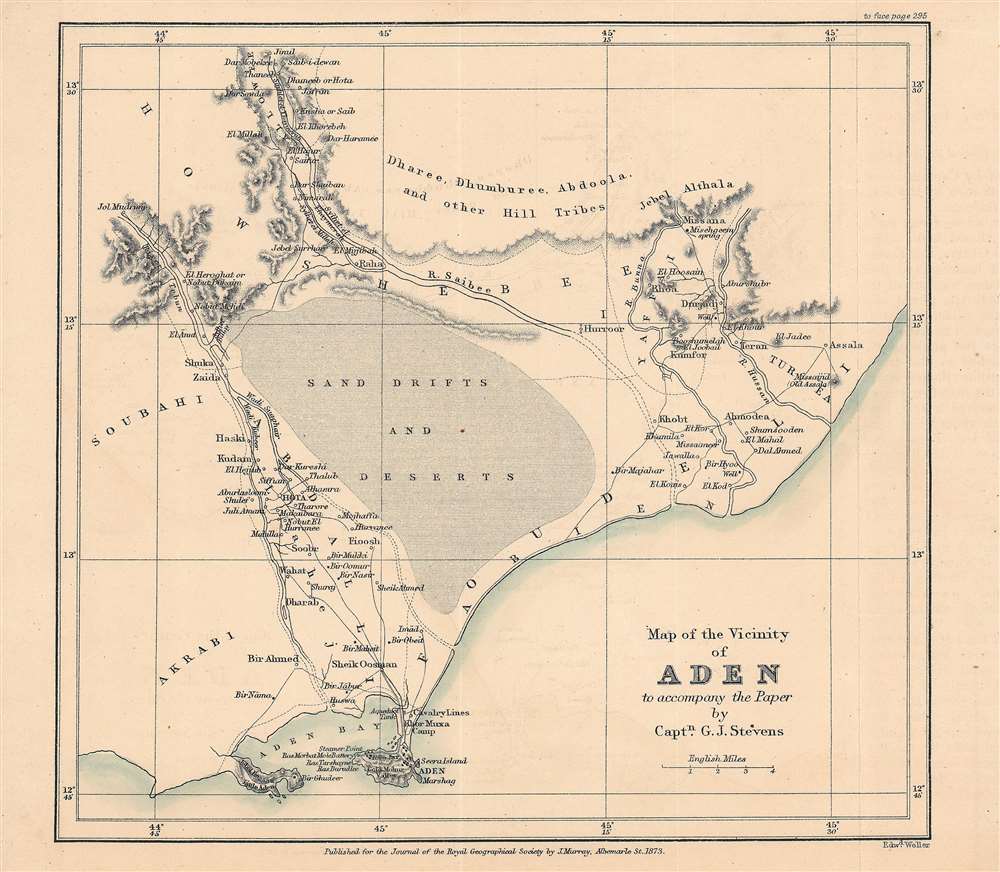 This is an 1873 map of Aden, Yemen and its surroundings engraved by Edward Weller and published by the firm John Murray for the The Journal of the Royal Geographical Society. The map accompanied an article written by Captain G. J. Stevens of his travels through these lands.

This map depicts the area surrounding Aden, a recently acquired British territory that was becoming an important piece in Britain's global empire at this time (see below). Naturally, the British were both interested in and concerned about the surrounding territory, which belonged to the Sultanate of Lahej (Lahij). The article which this map accompanied, written by Captain G. J. Stevens, describes a foray of British troops and local guides to explore the surrounding area and call on local grandees. The prevalence of water, state of roads, nature of society, and economic activity of the areas visited are all described in detail, much of which is also indicated here.

The Dharee, Dhumberee, and other 'hill tribes' identified here had recently fallen into disputes with the Sultanate and other powerful local rulers over water rights, disputes in which the British became entangled in 1866. Stevens refers several times to the lingering effects of destruction wrought by British troops during an expedition that year, with many of the areas destroyed in 1866 being abandoned instead of rebuilt. He also mentions Bedouins inhabiting the mountains who were beyond the writ of any ruler. In the background of these complicated local politics was the relationship between the British and the Ottomans (Lahij and Aden itself were fought over in the opening months of World War I (1914 - 1918) though the campaign resulted in a stalemate).

Due to its strategic location and importance as a trading port, Aden has been coveted by a series of historical empires, including Ming China (the 'treasure fleet' admiral Zheng He visited in 1419), the Portuguese, and the Ottomans. Its prosperity faded in the 17th and 18th centuries, but it retained it cosmopolitan character as a home to Jews, Somalis, and Indians in addition to local Arab tribes. The British were ceded a portion of territory by the Ottoman-aligned Sultan (Sultanate of Lahej) in the late 1830s and established a protectorate over the surrounding territory, concurrent with much of today's Yemen. Initially the British were interested in stopping piracy, but over time they came to see Aden as a strategic asset against potential competitors in Arabia and the Middle East. The East India Company also viewed it as a useful stop on the way to India, while holding trade potential in its own right. Aden was declared a free port in 1850 and trade quickly boomed, with Aden overtaking Mokha as the main port for exporting coffee. The development of steam powered ships also made Aden a convenient coaling station, and its importance grew significantly with the opening of the Suez Canal. In its later years, Aden, more specifically 'Little Aden,' also became a site for petroleum refining.

This map was engraved by Edward Weller to accompany the article 'Report on the country around Aden' in Vol. 43 of The Journal of the Royal Geographical Society of London, published in 1873 by John Murray. The map is only known to be cataloged among the holdings of Princeton University and has no known history on the market.

Very good. Some offsetting present.
Looking for a high-resolution scan of this?