1909 Wood and Smith Wall Map of the Adirondacks, New York 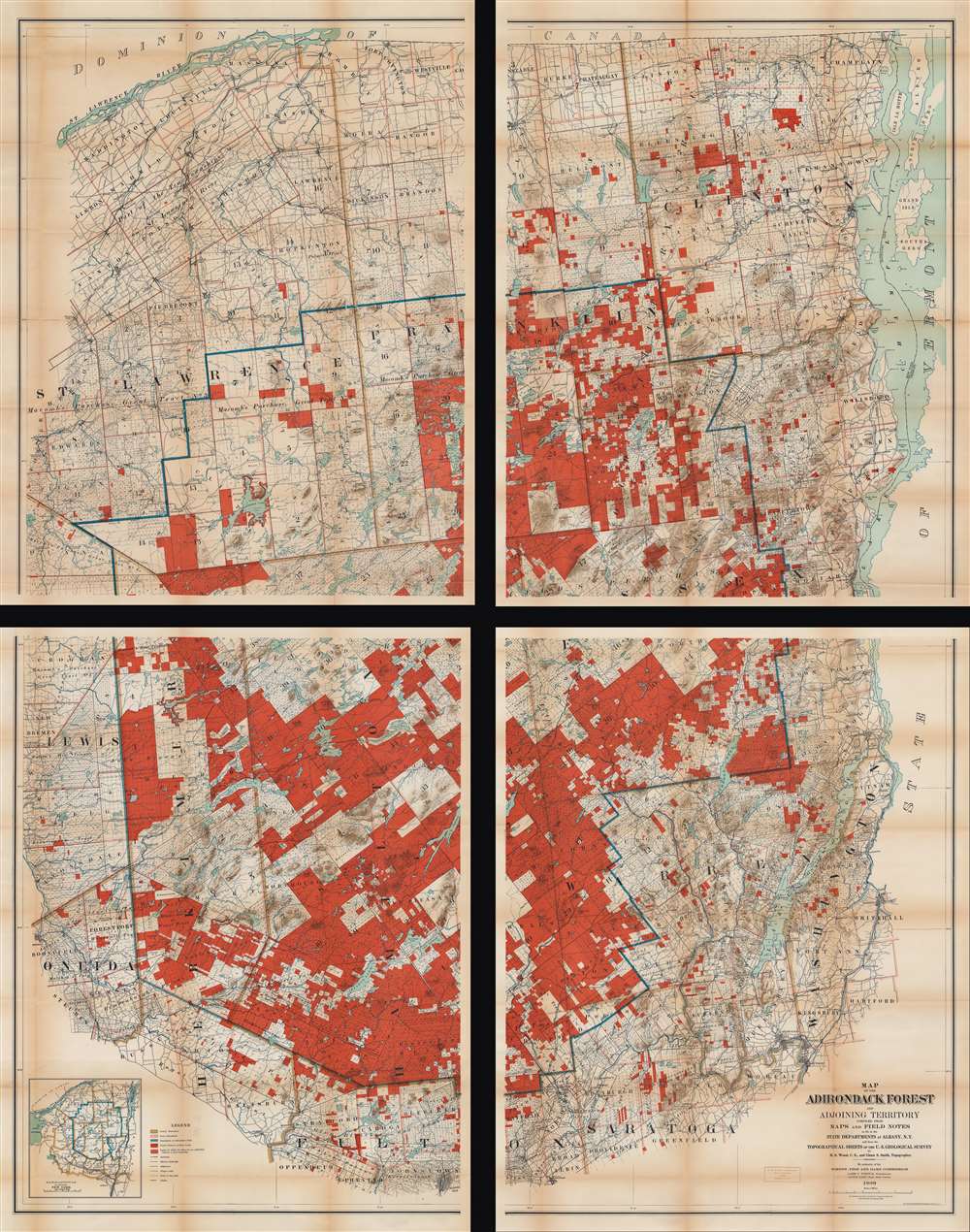 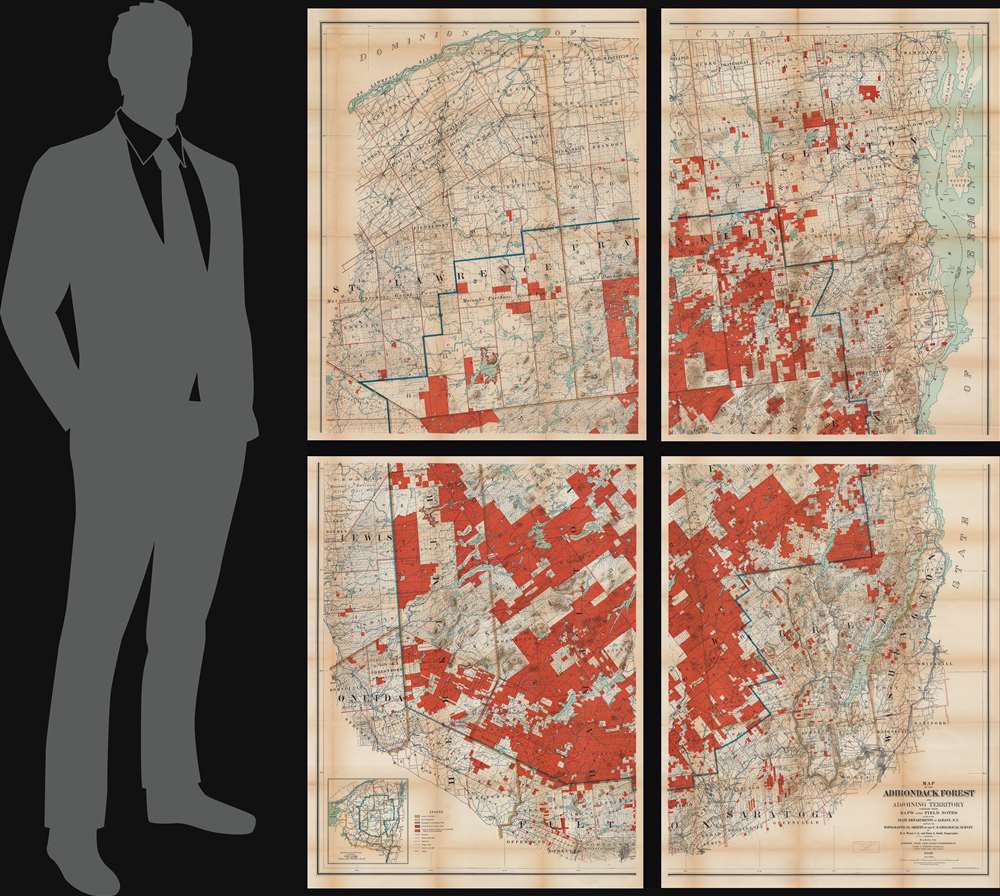 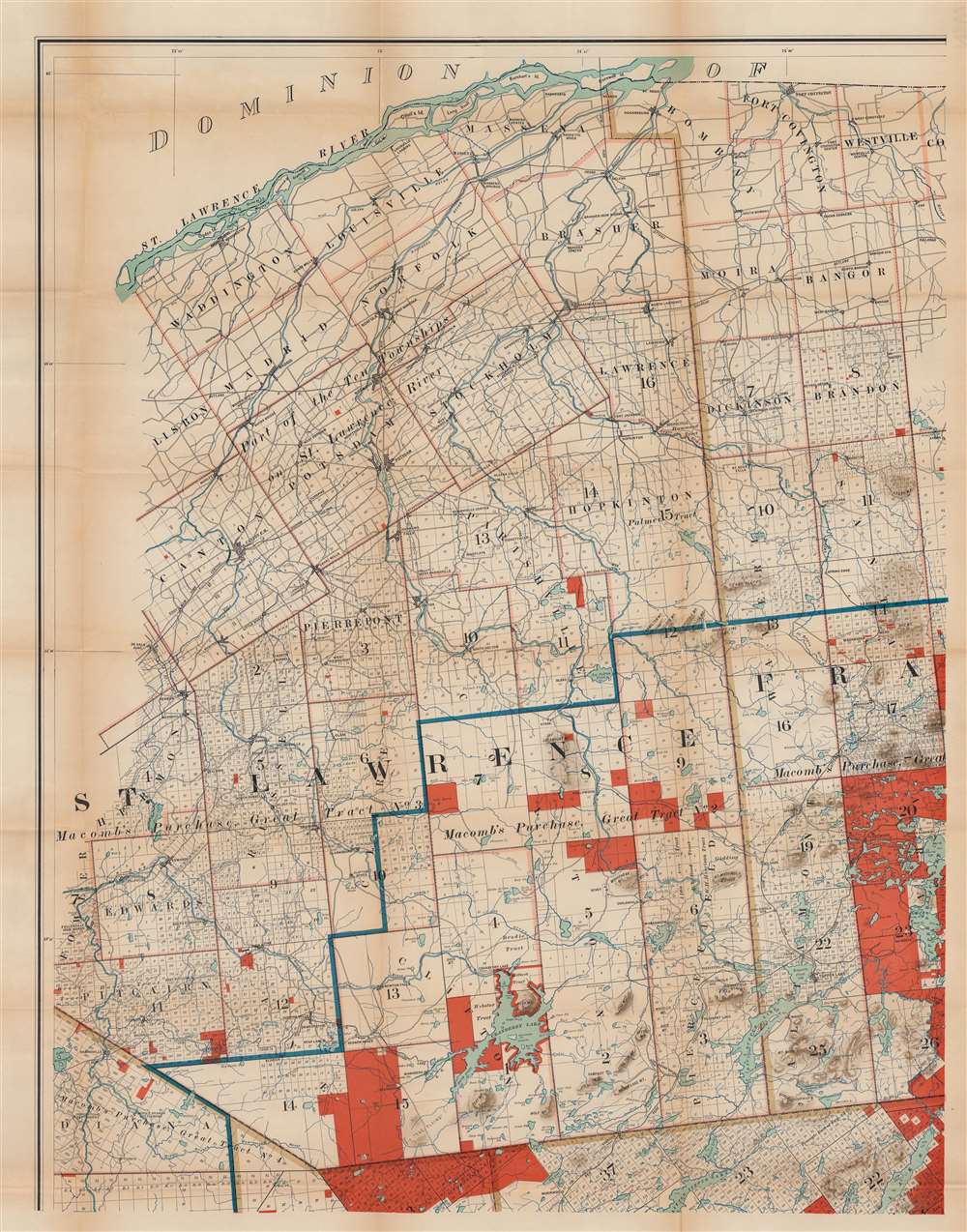 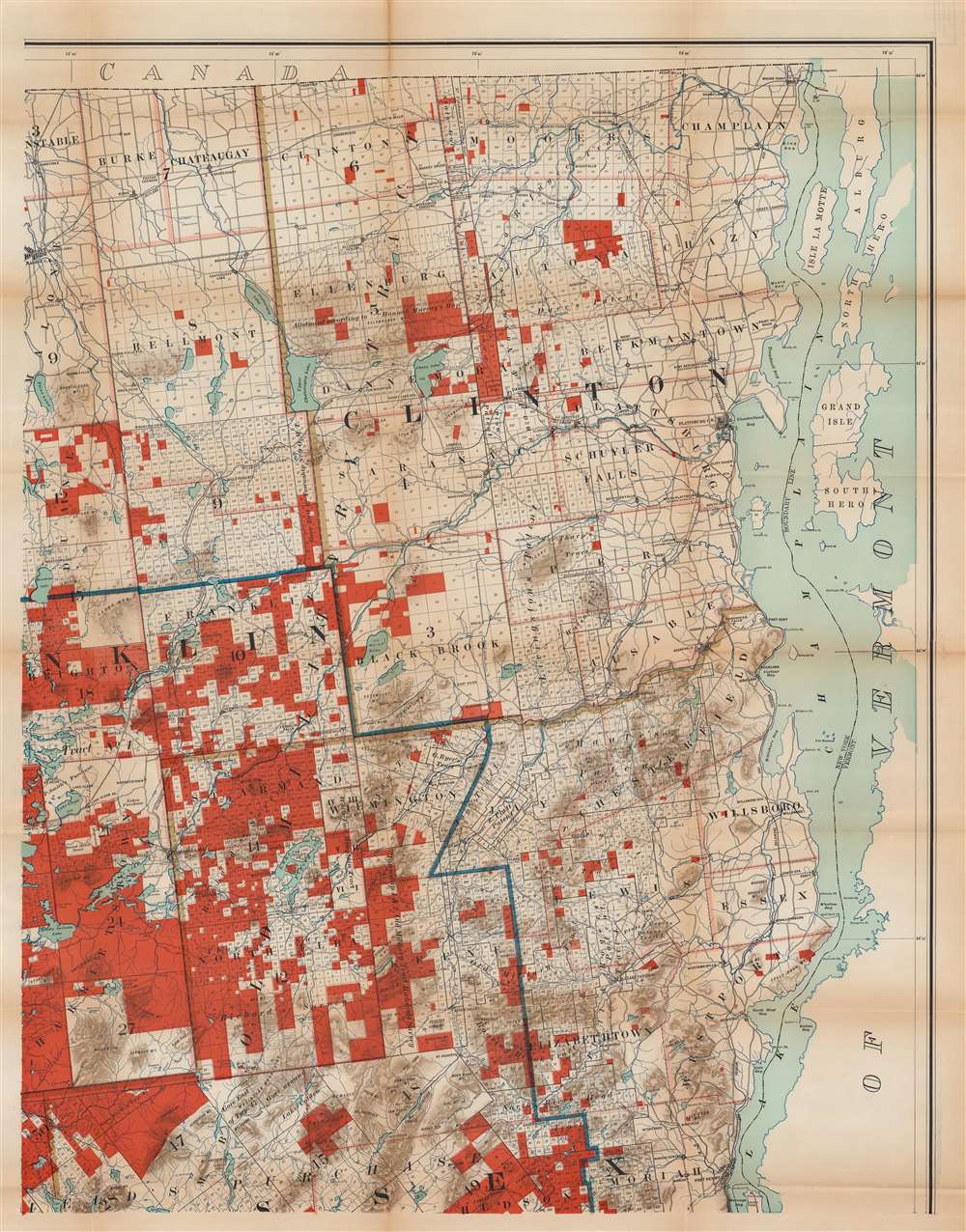 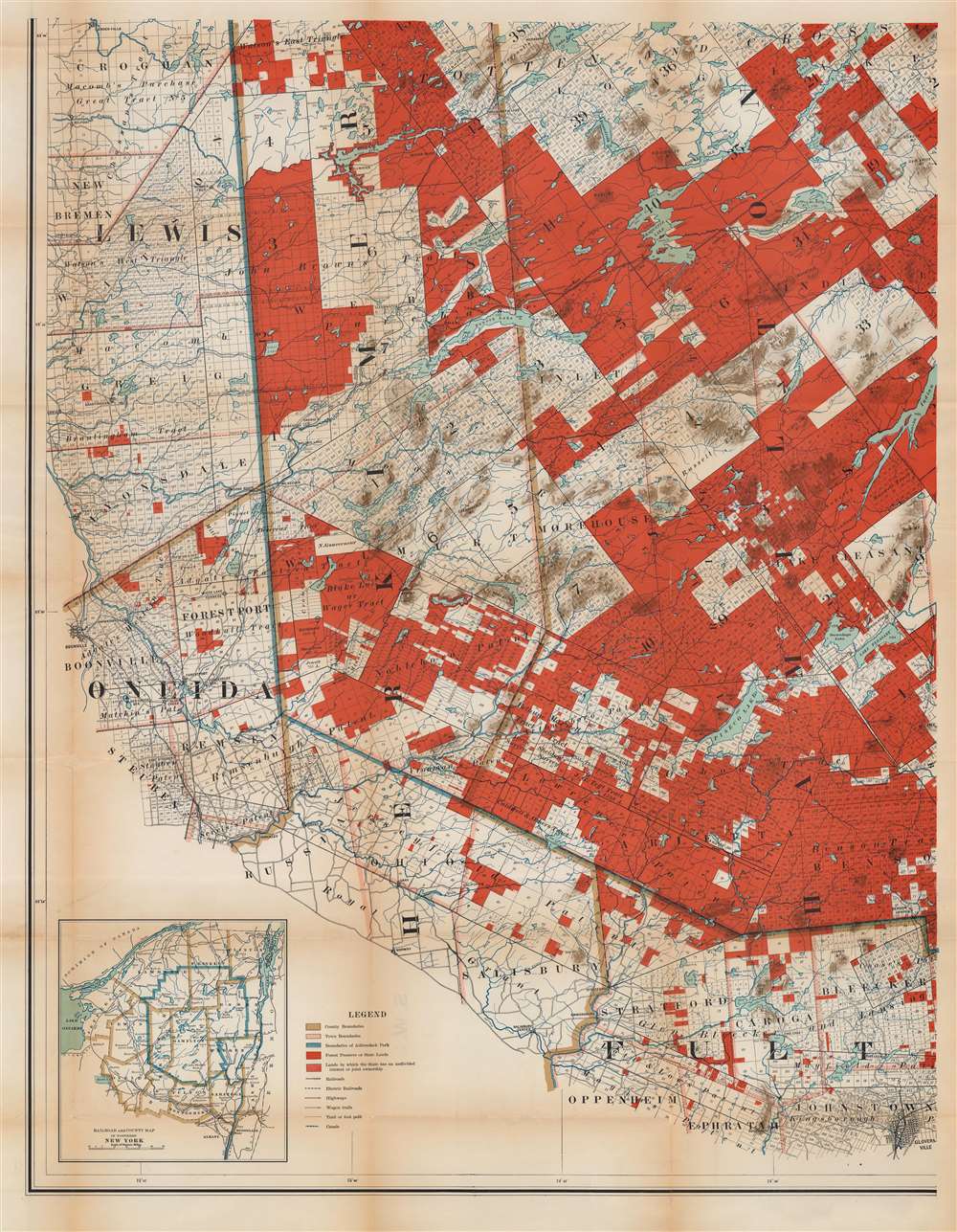 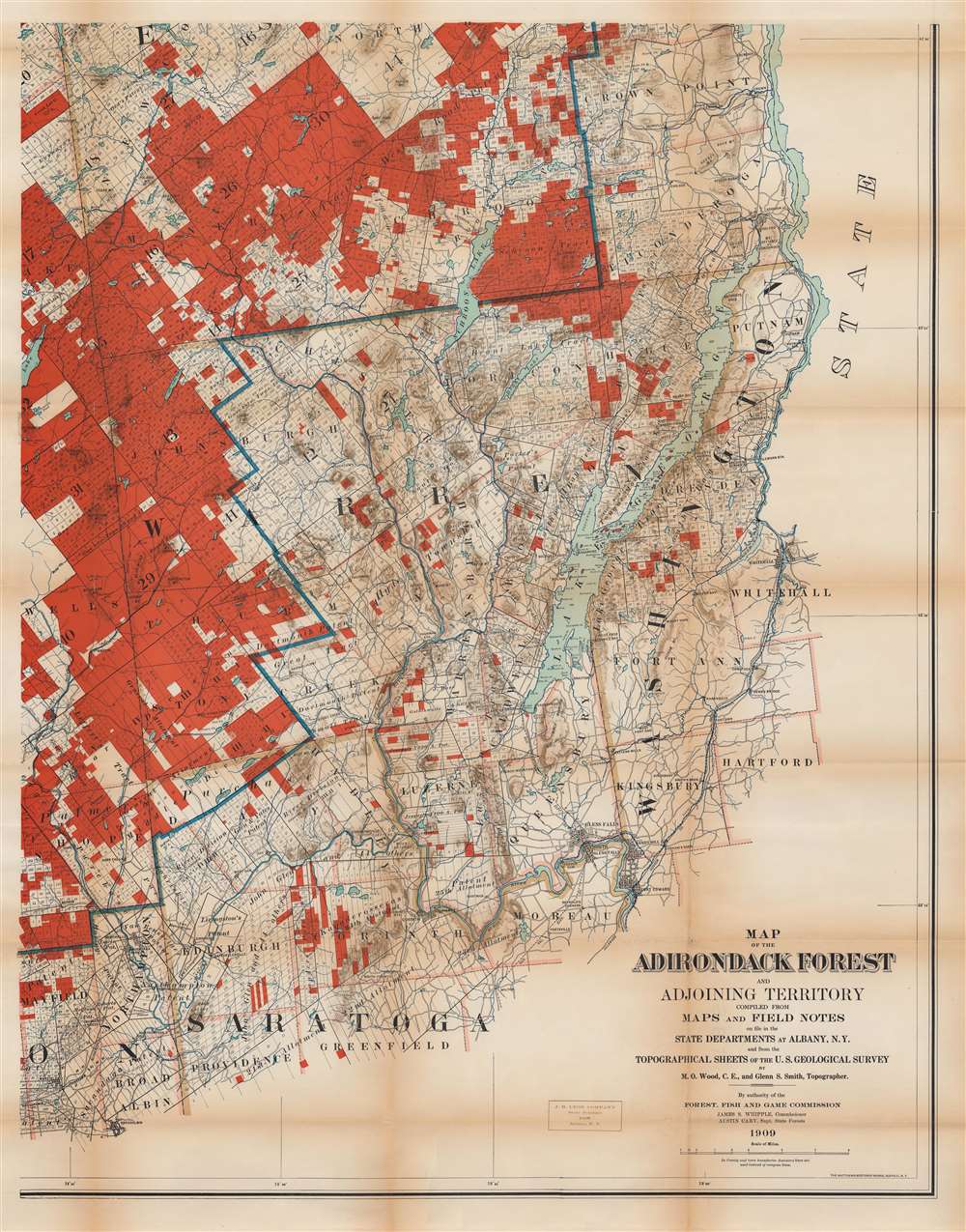 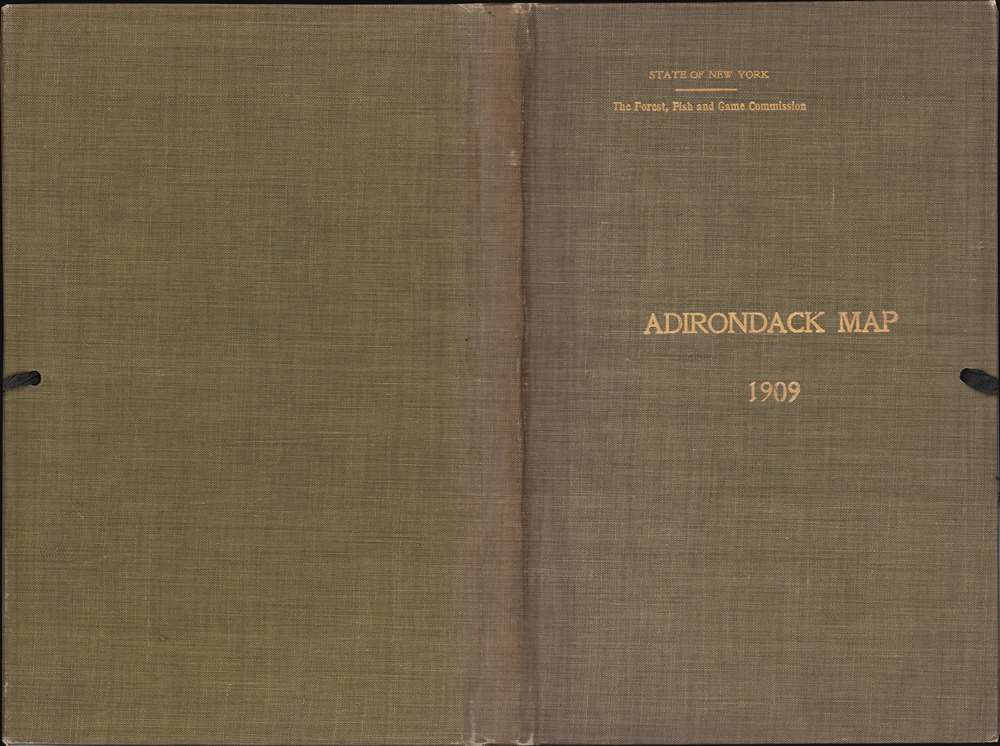 1909 Wood and Smith Wall Map of the Adirondacks, New York

A large, highly detailed wall map of the Adirondacks.
$950.00

An uncommon large scale 1909 Millins O. Wood and Glenn S. Smith map of the Adirondack mountains of New York. The map depicts the entire Adirondack Mountain region, extending from the St. Lawrence River and Canada to Groversville and Broadalbin, and from Lewis and St. Lawrence counties to Lake George and Lake Champlain. Created by authority of the Forest, Fish and Game Commission, the boundaries of the Adirondack State Park are defined by a bold blue line. Additional color coding designates the state of various lands. Bright red shading identifies Forest Preserve or State Lands, while red and white striped areas mark lands in which the State has an undivided interest or joint ownership. Town boundaries are noted in pink. County boundaries are illustrated by brown lines. The whole is divided into various land patents, purchases, lots, and townships, many of which are labeled. Both conventional and electric railroads are depicted using two different annotations. An inset in the lower left corner is a county and railroad map of northern New York.

The Adirondack State Park, part of the New York Forest Preserve, was established in 1892 'for the free use of all … for their health and pleasure.' In 1884, a state legislative commission chaired by botanist Charles Sprague Sargent recommended the establishment of an Adirondack Mountain Forest Preserve. The New York State Legislature formally adopted the suggestion one year later designated state-owned lands within certain counties in the Adirondacks and Catskills to be 'forever kept wild.' In 1894, the Adirondack State Park was formally enshrined as an amendment to the New York State Constitution.

Unlike most state parks, the Adirondack Park is not a cohesive unity fully owned by the state. Some 52% of the park is privately owned. The park includes more than 100 towns and villages, as well as farms, private homes, and active timbering zones. The complex ownership structure led to unique administrative challenges and the need for comprehensive large scale maps like this one.

Maps published using this title were published as early as 1893. However, those early maps were created by a different cartographer, William Fox. Subsequent updates appeared in 1895, 1898, and 1902. We note that editions created by M.O. Wood began appearing in 1908 with a new edition (the present example) published in 1909. Others may exist. Each was a completely new and revised map, published by different printing houses. The present map was drawn by Millins O. Wood and Glenn Shepard Smith and printed by Matthews-Northrup Works for the Forest, Fish and Game Commission in 1909. Examples are well represented institutionally, but few have made their way into the private market.

Millins O. Wood (June 3, 1868 - February 3, 1935) was an American civil engineer and cartographer. Born in Ohio, New York, Wood attended Union University and began working as a civil engineer immediately after graduation. An article lauding Wood for the 1908 edition of his map of the Adirondacks stated, 'No one could be better fitted to make this new map than Mr. Wood, as he is a proficient draftsman, and has an intimate knowledge of the Adirondack region'. Learn More...


Glenn Shepard Smith (April 1, 1869 - June 3, 1951) was an American engineer and topographer. Born in New York, Smith worked on a map of the Adirondacks with Millions O. Wood (June 3, 1868 - February 3, 1935) and editions were published in 1908 and 1909. He served on General John J. Pershing's staff during World War I. He commanded the 29th Engineers after World War I and oversaw the military surveys of Santo Domingo and reached the rank of colonel before retiring from the army. Then, he moved on to the U.S. Geological Survey and rose to the position of Topographic Engineer in Charge of the Western Division before he retired. He was buried in Arlington National Cemetery in Arlington, Virginia. Learn More...

Good. Four sheets each approximately 36.5 x 28 inches. Exhibits wear along original fold lines. Some toning. Verso repairs to fold separations and at fold intersections. Some small areas on infill on all four sheets. Closed small tears on two of the sheets.