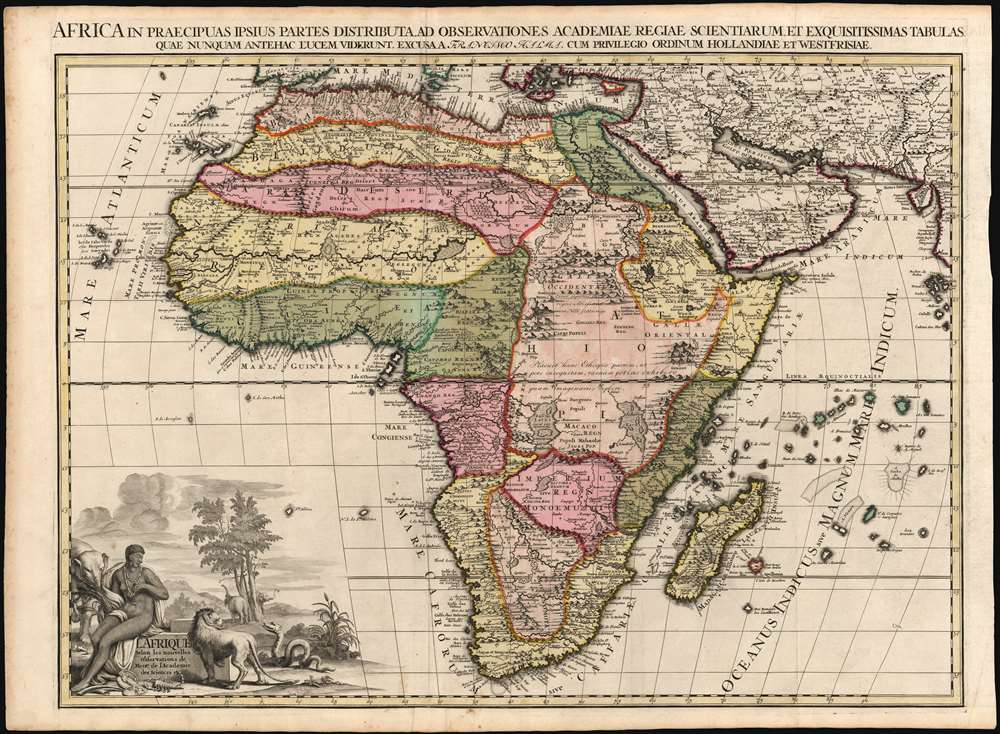 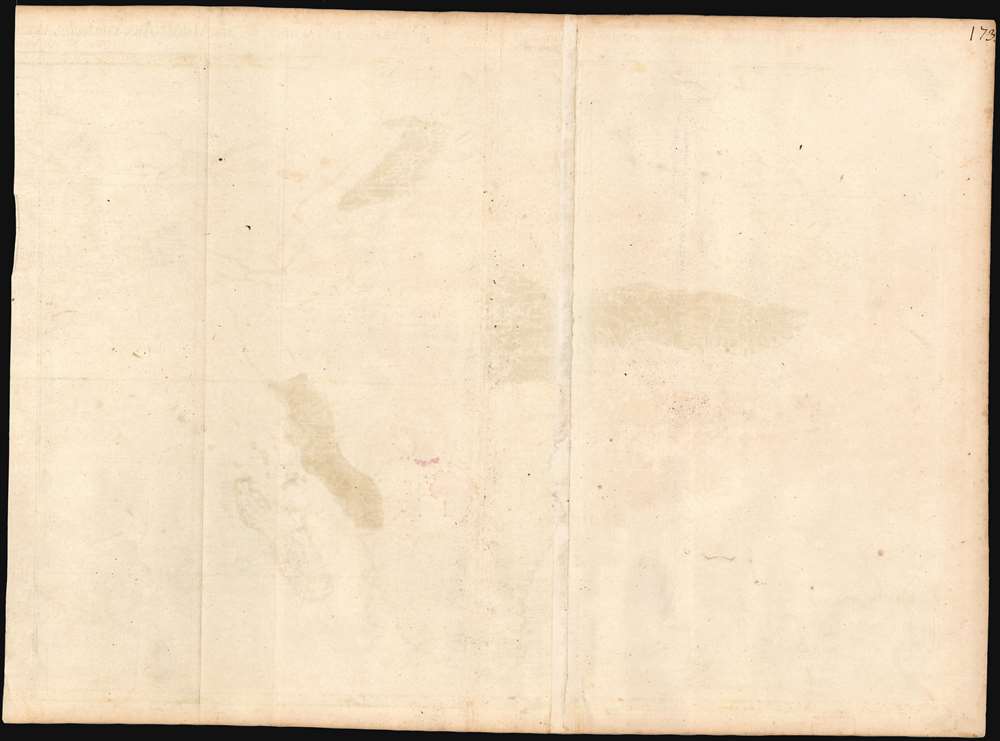 This is the rare first state of François Halma's c. 1699 separately-issued map of Africa. Its unusually large folio size, bold and sophisticated engraving, and rich original color sets this map apart as one of the most beautiful late-seventeenth century maps of the continent available to the collector. It dramatically presents some of the most notable geographic ideas of its era, most notably the placement of Lake Tana as the source of the Blue Nile, and the separation of the River Nile from Lakes Zaire and Zaflan - which since Ptolemy had been assumed to be the source of the great river. The map is surprising in its apparent originality: its immediate precursor maps are not at all obvious. Aesthetically, the jagged coastlines are reminiscent of the Dutch maps of the latter 17th century. While the coastlines are rendered in a unique enough fashion to make comparisons difficult, several geographical features suggest a lineage for the map.

The true course of the Niger River was not understood by Europeans until well into the 19th century. Typically, 16th and 17th century maps depicted that river flowing into the Senegal, east to west, with its source deep in central Africa (when in reality it flows from western Africa to the northeast before turning south and emptying into the Gulf of Guinea.) In spite of this error - in which Halma's map shares - some truthful elements do emerge. In this case, the presence on the Niger River of the Inner Niger Delta. In the maps of Sanson, Nolin, Coronelli, Jaillot, and Danckerts, the Niger River is shown to split and then rejoin just west of central Africa in the regions labeled 'Gangara' and 'Zanfara,' forming a large island. De Fer's 1698 wall map of Africa fills in this space, indicating the presence there of a lake or marshland, corresponding approximately with the Inland Delta. That feature is preserved in Halma's map - apparently exclusively of other maps following in the Sanson-Jaillot-Du Val lineage of maps, which do not follow De Fer but continue to show the space between the split in the Niger as an island, on up to the 1700 De l'Isle.

Like most maps of the 17th century, the maps of the Sanson-Du Val lineage present the two great lakes of Zaire and Zaflan as the sources of the River Nile, a geographical assumption reaching back to Ptolemy. Pierre Du Val's 1678 4-sheet map of the continent is the first to diverge from this trope, showing instead Lake Tana as the source of the Blue Nile, and disassociating Lakes Zaire and Zaflan completely from the Nile. This correction was far from universally adopted by contemporaries. The handful who did included De Fer, de la Croix, Nolin, and Coronelli; the only Dutch map prior to Halma showing a variant of Du Val's Blue Nile geography is Carel Allard. Halma's presentation of the Blue Nile takes after that of De Fer. The shape of Lake Zaflan as shown on Halma's map closely resembles that which appears on the De Fer maps, which is itself distinct from that which appears on any other earlier map.

The geography of Madagascar and its surrounding islands also places this map in the lineage of maps following Sanson and other French cartographers of the second part of the 17th century. Fort Dauphin is marked on the southeast coast of Madagascar. This settlement first shows up in Etienne de Flacourt's map of Madagascar, to be reproduced in the maps of Sanson, and Du Val. Jaillot's maps would also reproduce this, but by the end of the 17th century it was also appearing on Dutch maps. A bay in the west coast of Madagascar,Ance de Mansiatre,, is presented distinctively here. This too traces back to Flacourt's map and shows a clear lineage from French cartographic sources - although by the time this map was produced other Dutch cartographers adopted the French model. Between Madagascar and the mainland, the Baixos de Judia appears as an island, extending north to south. These shallows appeared on Blaeu's map, and likewise Jaillot and Coronelli's. Du Val's 1678 map presents the shallows as an island, as does the Danckerts. The Nolin and Coronelli maps both show the shallows as a triangular area, but not as an island. For this feature, De Fer marks an island in a roughly triangular shallows.

South of the island of Apollonia (Isle de Bourbon) is an imaginary island named 'Dos Romeiros dos Castillianos' (from the Portuguese, the Pilgrim's islands of the Spanish). Jaillot's map presents this island as an archipelago approximately ten degrees to the east, a trait shared on maps by Visscher and de Ram. Many Africa maps do not show the islands at all - not so much because the archipelago is imaginary, as because they do not reach far enough to the east. The 1678 Du Val does not include them, covering that region with a key cartouche instead. However, Nolin's 1689 map places the islands on the same longitude as the Halma, as does the de la Croix, the Coronelli, and the De Fer maps.

On balance, the key geographical features of the map bear closest resemblance to the geography appearing in De Fer's maps beginning in 1698. Halma did not follow De Fer in his delineation of the coastline - especially eschewing De Fer's puzzling treatment of the coast in the vicinity of the Cape of Good Hope. Many of the idiosyncrasies of Halma's coastline may well be ascribed to an effort to correct De Fer's fancies to a more conventional presentation of the shape of the continent.

The title cartouche is shown inscribed on a stone block, on which is seated the female representation of Africa. Ivory tusks lie at her feet, as do two medallions bearing Pharaonic imagery. The foreground is full of dangerous animals: a lion, two snakes, and a tremendous scorpion. In the mountainous, forested background several elephants can be seen.

The map was printed by François Halma, probably after 1699. It was masterfully composed by Jan Goeree, and superbly engraved by the unjustly obscure J. Baptist. Halma produced no full-size atlas of his own, but this map was accompanied by similarly grand maps of Asia, America, and Europe, and likely Halma's 1696 north polar projection world after Cassini. Before 1713, the plates were acquired by Leiden map publisher Pieter van der Aa, who replaced Halma's imprints with his own and included the maps in his 1713 Le Nouveau Théâtre du Monde. Halma's separately issued maps, destined for decorative use or tipping into composite atlases by other publishers, have survived in only a few examples. We are aware of only one other example of this edition of this map coming to the market, and there is but a single example cataloged in OCLC, tipped into a Visscher atlas now held by the Newberry Library.

Very good. Few marginal mends away from printed image, some creasing around upper centerfold, else excellent with a bold strike, attendant to the youth of the plate. Superb original color.