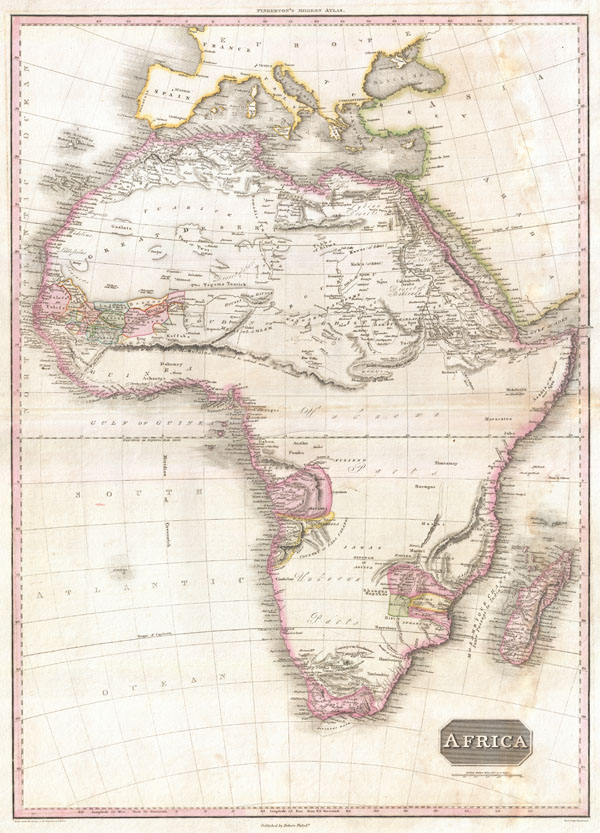 This is John Pinkerton's stunning 1818 map of Africa. Nineteenth century mapmakers were particularly challenged by the difficult task of deciphering Africa. Despite a fairly constant flow of information about the continent dating to the middle ages, much of the interior remained speculative at best. Pinkerton, straying from the path of his 18th century predecessors chooses to leave much of the interior blank and instead focuses known areas, or more precisely, areas perceived to be known. These include Mediterranean North Africa, Egypt, Abyssinia, the western Niger valley, the Congo, South Africa, and the lands of Monomotapa (Zimbabwe).

Each of these regions have their own unique history of European contact. Egypt, along the Nile, had been well mapped even in Antiquity. The same is true of Christian Abysinnia who, through regular contact with the Coptic mother church in Egypt, was well known, if mostly unexplored by Europeans. The tale of European incursion and occupation of South Africa could easily encompass volumes and explains Pinkerton's sophisticated mapping of this area. The Niger Valley and the Congo had been simultaneously exploited and explored by Portugal and later Belgium since the 1300s.

Monomotapa, opposite the island of Madagascar, was a major stopping point on the Portuguese trade routes to India. Curiously this region has also been associated with King Solomon's Mines and Biblical legends of the Land of Ophir. Pinkerton doesn't specifically mention the Kingdom of Monomotapa, or Mutapa, which by this time had long fallen into decline, but he does he does identify several of its constituent states including Manica, Sabia, and Sofala, as well as the 'Rich Gold Mines' supposedly found there. In truth this area was rich in gold, in the 1300s, but by the time the Europeans arrived, most of the mines had been tapped out.

The remaining parts of the map are frequently quite vague. Pinkerton does note several important and recognizable African tribal groups including the Bushman of the Kalahari (Booshmanas), the Hottentots, the Massai, and others. North of the Monomotapa region we can find Lake Maravi, a long narrow lake oriented on a north-south axis. This lake, with its northern extremis speculatively ghosted, most likely represents Lake Malawi or Lake Tanganyika, or both. Curiously, just to the east of Maravi, Pinkerton maps an interesting apocryphal mountain range which he call the 'Backbone of the World.' This range has variously been associated with the Mountains of the Moon, described by the 5th century Alexandrian geographer Claudius Ptolemy, and another independent range described by Arab cartographers. Regardless, the 'Backbone of the World,' at least as it applies to this part of Africa, never existed. Further north though, Pinkerton does map the 'Mountains of the Moon,' which were said by Ptolemy to lie near two great lakes that were at the source of the White Nile. Today some regard this range and its lakes as speculative, but more likely it represents Ptolemy's very real knowledge of Lake Victoria and the Rwenzori Mountains. In any case Pinkerton makes the curious decision not to map the Ptolemaic Lakes, though does maintain the Mountains of the Moon, placing the source of the Nile there. To the west of the Mountains of the Moon Pinkerton draws a long mountain range called the 'Kong Mountains.' This speculative was proposed by the explorations of Mungo Parks and were presumed to be the southern barrier to the Niger River valley. All in all, this is a spectacular map that stands up to hours of close examination - a fascinating addition to any Africa collection.

Good. Minor dampstaining in the right hand quadrants. Else clean. Blank on verso.