1818 Pinkerton Map of Northern Africa and the Mediterranean 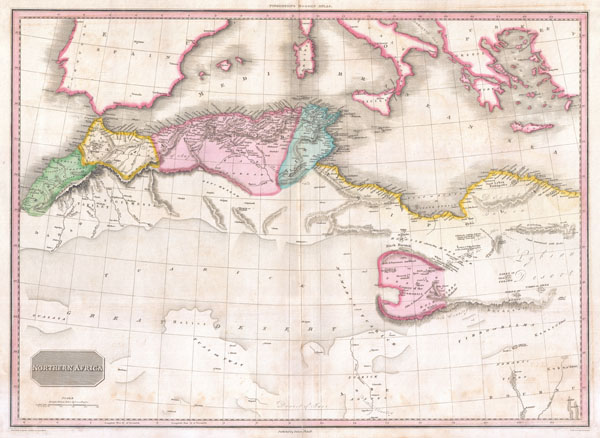 1818 Pinkerton Map of Northern Africa and the Mediterranean

This fascinating hand colored 1818 map by Edinburgh cartographer John Pinkerton depicts northern Africa. Covers from Morocco to Siwa (Siwah) Oasis in the Libyan Desert. Focuses Morocco and the Mediterranean regions of Fez, Algeria, Tunisia and Tripoli. Also shows the Kingdom of Fezzan. Though mostly desert Fezzan has numerous oaises and supported a relatively large population. This desert kingdom was a critical stopping point for trade caravans crossing the Sahara since antiquity. Drawn by L. Herbert and engraved by Samuel Neele under the direction of John Pinkerton. This map comes from the scarce American edition of Pinkerton's Modern Atlas, published by Thomas Dobson & Co. of Philadelphia in 1818.