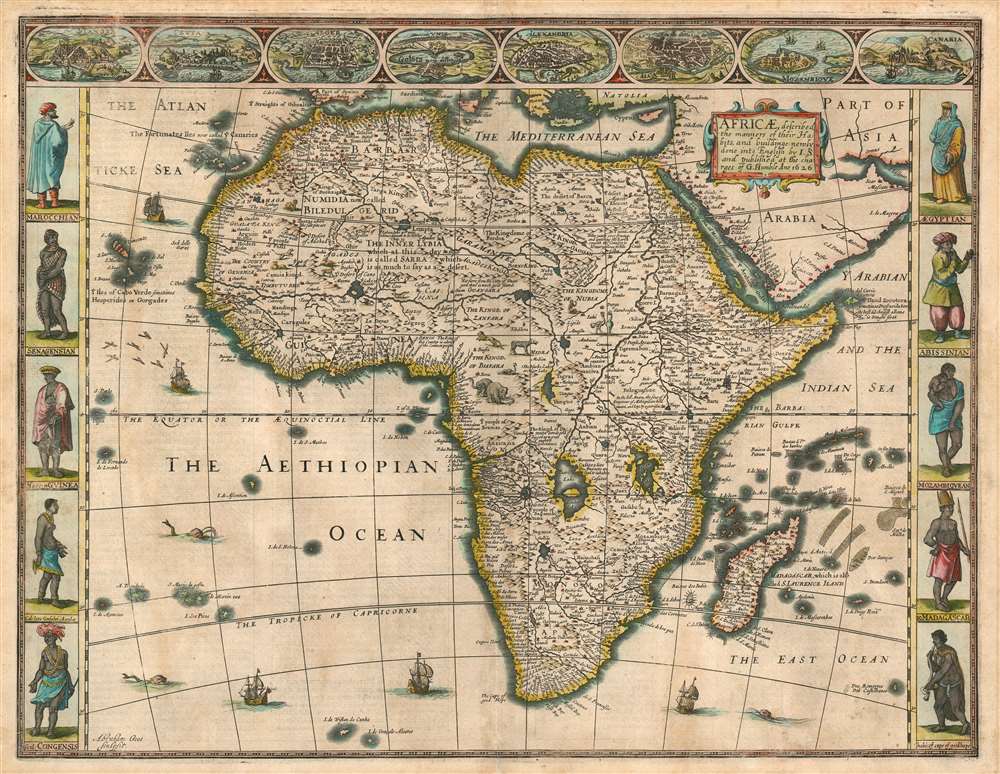 The First English Map of Africa, in its First Edition

This is the first state of John Speed's 1626 map of Africa. It is the first English map of the continent, and it is the only edition of this map to be printed during its author's lifetime. This beautiful map is one of the most desirable early maps of Africa, combining superb engraving, attractive Dutch styling, and entertaining and abundant English text. While Speed cannot be accused of innovation as a mapmaker per se, he became an accomplished historian and compiler and his atlases of the British Isles and the World are among the signal cartographic works of the 17th century. The cartography for this mnap is drawn from the maps of Jodocus Hondius (whose student Goos actually engraved the map). Hondius' source was ultimately Willem Blaeu's 1608 wall map of Africa. As is the case with all of these maps, the Speed demonstrates 17th century European geography's detailed knowledge of Africa's coasts wedded to a deep mystification of the interior. The course of the Nile, for example, is shown in substantially the same configuration as was supposed in the second century by Ptolemy. Speed adds descriptive text - for example, noting areas in western and central Africa where gold is said to be found, and indicating areas said to be occupied by Amazons.

Visually, the map shares with Blaeu the decorative elements of key city views along the top border, along with figures to the left and right depicting the denizens of the lands shown. The cities are North African, with the exception of Canaria and Mozambique, and all reflect the coastal limitations of European knowledge of Africa. In addition to the borders, the body of the map as well is richly decorated with sailing ships, sea monsters, flying fish, elephants, ostriches, lions, and a zebra.

Speed's adoption of the Dutch carte á figures map style (and indeed, the entirety of the Dutch state of the art for the mapping of Africa) becomes unsurprising when one considers the degree to which Speed was dependent on Dutch engravers for the production of his atlases. Virtually all of the maps produced for Speed during his lifetime were executed by Jodocus Hondius and (as is the case here) his protégé and student Abraham Goos: it would appear that, until well into the 17th century, the art of engraving in the British Isles was unequal to the challenge posed by the production of maps. Not until the 1676 Bassett and Chiswell edition of Speed's work would maps be included that were actually executed by an Englishman, Francis Lamb.

Although Speed died in 1629, his atlas was kept active long afterwards as its plates passed from George Humble to William Garrett to Roger Rea and finally to Basset and Chiswell, whose final edition of 1676 is the most easily found. This 1626 edition of the separate map is only listed four times in OCLC: at Stanford, the Bibliotheque National, the University of Witwatersrand and the University of Kwazulu, Natal. Later editions are more ubiquitous.

John Speed (1542 - 1629) was an important English historian and cartographer active in the early 17th century. Speed was born in Fardon, Cheshire and apprenticed under his father as a tailor. Though his heart was never in tailoring, Speed dedicated himself to this profession until he was about 50 years old. During all the time, Speed dedicated his spare time to research as amateur historian and mapmaker - even preparing several maps for Queen Elizabeth. In London, Speed's interest in history lead him to join the Society of Antiquaries. Eventually he befriended the wealthy Sir Fulke Greville, who sponsored his researches and eventually freed him from the haberdashery profession. Working with William Camden, Speed eventually published his 1611 Historie of Great Britaine. Though this history itself was amateurish and of minimal importance, Speed's inclusion of numerous maps of British Cities and town was seminal. In many cases these plans were the first maps ever issued of their respective subjects. Later, turning his attention more fully to Geography, Speed published the magnificent atlas Theatre of the Empire of Great Britaine and, just prior to his death, the 1627 A Prospect of the Most Famous Parts of the World. These were the first British world atlases and have a landmark position in the history of cartography. These atlases continued to be published well after Speed's death.

Speed, John. A Prospect of the Most Famous Parts of the World. (Humble, London) 1626.