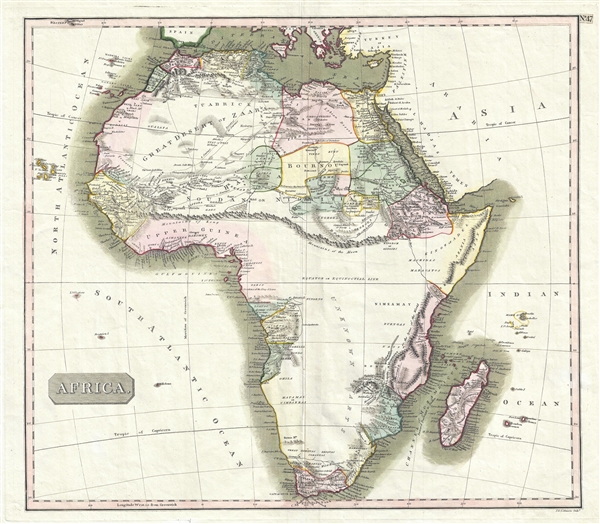 This is John Thomson's fascinating 1814 map of Africa in its first edition. This remarkable map is as engrossing as much for what it doesn't show as for what it does. The great blank interior, here labeled, 'unknown parts' reveals just how little of the 'Dark Continent' was known in the early 19th century. On this map exploration is limited to the Nile Valley, the costal Mediterranean lands, Abyssinia, the Niger Valley, the Congo, South Africa, and the Mozambique Coast. Reviewing the map one's attention is drawn to the large and fictive mountain range, alternately labeled the Mountains of Kong or the Mountain of the Moon, stretching across the continent. This range is a combination of Ptolemaic speculation regarding the source of the White Nile as well as speculation by the traveler Mungo Park regarding the sources of the Niger. Further south Lake Malawi (l. Maravi) appears in embryonic form, most likely gleaned from indigenous reports, and is suggestive of the great lakes of the Rift Valley. Caravan routes crisscross the Sahara, alternatively labeled 'Great Desert'. Some of these routes are give exotic names such as 'Desert of 20 Journies' refering to the number of days it takes to cross that expanse. In addition, a number of late 18th and early 19th century exploratory routes are identified. In general Thomson maps are known for their stunning color, impressive size, and magnificent detail. Thomson's work, including this map, represents some of the finest cartographic art of the 19th century. Relief is shown by hachure with towns, cities, and major topographical features identified. Engraved in 1813 by J. and G. Menzies of Edinburgh for issue as plate no. 15 in the 1817 edition of Thomson's New General Atlas.