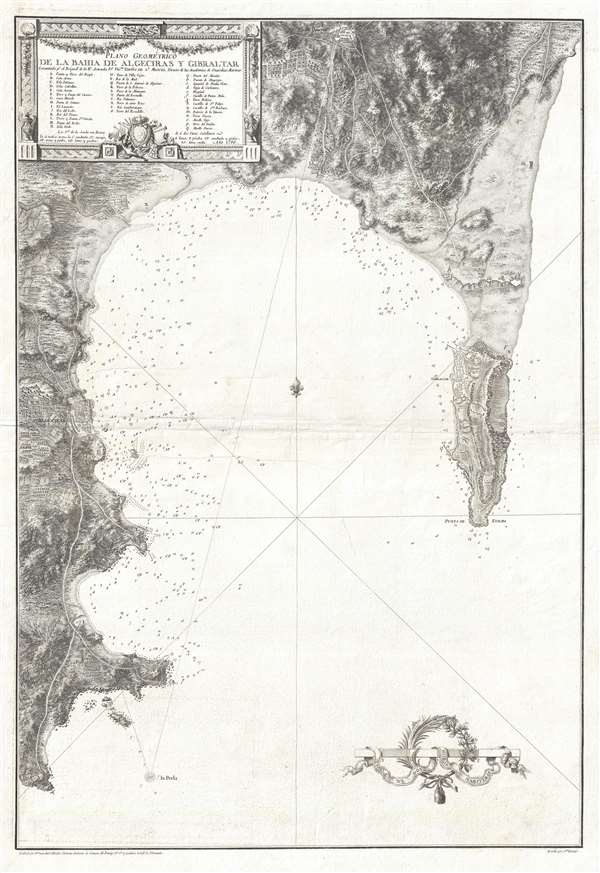 An extremely rare large scale 1786 Spanish nautical chart detailing the Bay of Gibraltar and Gibraltar by the famed hydrographer Vincente Tofiño de San Miguel.  The map depicts the Bay of Gibraltar from Algeciras to the Mediterranean.  Depth soundings are included along the entire coast of the bay and around Europa Point.  The whole is beautifully engraved, with the terrain of the region exquisitely rendered, along with individual buildings in Gibraltar and Algeciras. The fortified border between Gibraltar and Spain is also illustrated and labeled. A decorative title cartouche is situated in the upper left corner, along with an index corresponding to forty different locations identified by either upper- or lower-case letters.

Gibraltar is a British Overseas Territory that was captured by Anglo-Dutch forces in 1704 during the War of the Spanish Succession. The territory was ceded in perpetuity to Great Britain under the Treaty of Utrecht in 1713. Gibraltar served an important role during World War II, as a key Royal Navy base controlling the entrance and exit from the Mediterranean, and also as the command post for General Eisenhower during the Operation Torch invasion of North Africa. Today, Gibraltar is mostly self-governed, although some powers, such as defense and foreign relations, remain the responsibility of the British government.

This map was produced by Vincente Tofiño de San Miguel and engraved by Juan Antonio Salvador Carmona. It appears that these maps may have been issued first independently then bound into various composite nautical atlases from about 1788.


Juan Antonio Salvador Carmona (February 7, 1740 - January 20, 1805) was a Spanish engraver. Born in Nava del Rey to Pedro Salvador and María García, he was the youngest of three brothers. His two older brothers, Manuel and José, went to Madrid to study under their uncle Luis Salvador Carmona, a sculptor for the King's court. Juan spent his childhood wit his parents, where he trained in drawing under their guidance. At fifteen, however, Carmona traveled to Spain to join his brothers and his uncle, and changed his last name from García to Salvador Carmona, which he would go by for the rest of his life. In 1758, Carmona's brother Manuel left to study at the Academy of San Fernando in Paris, while he stayed in Madrid with his uncle. It was around this time that Carmona began to move away from sculpture and more definitively toward engraving. He left his uncle's studio and went to the workshop of Tomás López, a well-known map engraver, who had known his brother in Paris. It was during his two time with López that Carmona moved exclusively to engraving. After his brother returned from Paris in 1763, Carmona and Manuel began working together. Carmona continued to improve, and in 1770 he submitted some of his work to the Academia de San Fernando, and, following a vote, he was appointed Supernumerary Scholar. After this, his career truly began to take off. He worked for a lot of printers, creating various different works. Between 1778 and 1780 he produced 41 plates for the Apostles and Father of the Church designed by Antonio Ganzález Velázquez. This project was intended to contain portraits of all the saints, but was discontinued when it proved not to be profitable. In 1786, Carmona finished a set of Four Continents, which he dedicated to Prince Charles. Thanks to this action, he was appointed Chamber Engraver of the Prince, a title which had not existed until then. When Prince Charles ascended to the throne as Carlos IV, Carmona was made the Engraver of Camera and sworn in in 1790. Also in 1786, Carmona produced at least two plates for the Atlas of Vincente Tofiño San Miguel, and Carmona published his autobiography in 1795, the last real information available about this very successful artist. His last known engraving was produced in 1802. The exact date of Carmona's death is uncertain, as a file of his kept in the Royal Palace records his death as occurring in 1804, but the historian Manuel Ossorio y Bernard states that Carmona died on January 20, 1805. Learn More...