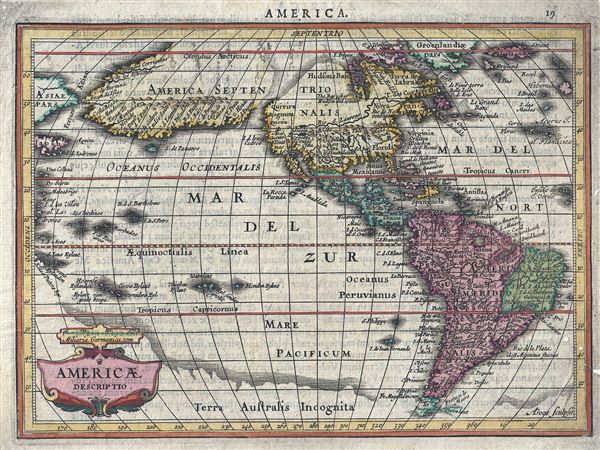 First printed map to used the Goos Speculation regarding the Pacific Northwest.

A fine first edition first state example of an attractive and important 1628 map of American (North and South) issued by Joannes Jansson and Aberham Goos. Centered on the American continent, this miniature map covers from the Arctic Circle to Tierra del Fuego. It extends westward as far as Japan and eastwards to Ireland (Hibernia). Along the southern border stretches the apocryphal Terra Australis Incognita.

The map is geographically dominated by an insular or peninsular protrusion extending from the west coast of America all the way to Asia, some 65 degrees. This rarely seen form is unique to Goos and also appears in the Keere and Plancius globe of 1614 and in the single known example of Janssonius' 1621 globe gores, all of which were engraved by Goos. What is presented here is mostly likely Goos' interpretation of Juan de Fuca's somewhat dubious discoveries. Juan de Fuca, also known as Ioannis Phokas, was a Greek navigator in the service of Philip II of Spain. He was commissioned to undertake two voyages up the coast of North America from Mexico in search of the fabled Strait of Anian - a mythical passage to Asia. Fuca sailed up the coast where he discovered a vast opening at 47 degrees north latitude, which he describes with some accuracy. This strait, still called the Strait of Juan de Fuca, separates Vancouver Island from Washington State and forms the modern boundary between the United States and Canada. Unfortunately Fuca did not sail into the strait for any distance, though he claimed to, and his subsequent descriptions of what he found within have darkened his voyages with considerable doubt.

Why Goos then chose to extend the coast land directly westward towards Asia is unclear. Most of the place names are associated with previously maps sites on the California coast, for example Cape Mendocino and Cape Fortuna. Just off the coast of this strange extension, he also maps the Island of Paxaros (a transliteration of Pajeros, or birds) which was discovered by Miguel Lopez de Legaspi, the navigator who pioneered Spanish trans-specific trade and established the first European presence in the Philippines.

Close examination also reveals several other elements of interest. Just west of the Virginia / Carolina coast there is what appears to be a vast inland sea. This can only be interpreted as an early attempt to resurrect the idea of Verrazano's Sea. Verrazano's Sea was a speculative discovery by Giovanni Verrazano, who in 1524, anchored off Cape Fear, North Carolina, saw the Pamlico Sound and assumed he had discovered a great inland sea that would lead to the Pacific. This apocryphal sea was subsequently added to printed maps for a very short period and became known as Verrazano's Sea.

Further north the St. Lawrence River extends westward nearly to the West Coast where it is fed by a large lake. There is no clear precedent for this though it may be a loose interpretation of indigenous reports of the Great Lakes - though these factual lakes, being as yet undiscovered, do not actually appear on this map.

In South America the appearance of a great lake in modern day Guyana is noteworthy. This part of South America generated considerable European interest in the early 17th century following the publication of Sir Walter Raleigh's fascinating Discovery of the Large, Rich, and Beautiful EMPIRE Of GUIANA. Raleigh's expedition traveled down the Orinoco River in search of the Kingdom of El Dorado. Today we know that El Dorado did not exist, but was rather an amalgam of very real tribal traditions and the European lust for gold. Nonetheless, in the 16th century, tales of El Dorado were common conversation along the port cities of the Spanish Main. Having explored a considerable distance down the Orinoco, Raleigh's expedition found itself mired in a remote tribal village at the onset of the rainy season. While waiting for an opportunity to return up the Orinoco, a trading delegation arrived. At this time the dominate trading empire in the Amazon were the Manoa, who, though based near modern day Manaus, pursued trade routes from the foothills of the Andes to the Amazon and Orinoco Deltas. While the rainy season prevented Raleigh from moving forward, for the Manoa it had the opposite effect, for it inundated the vast Parima flood plain creating a great inland sea, consequently opening an important trade connection between the Amazon and Orinoco Rivers. When the Manoa arrived, Raleigh and his men noticed that they had various golden trinkets for trade. This was apparently enough for Raleigh to deduce that they must indeed be from the hidden kingdom of El Dorado. When Raleigh asked where the traders came from, the locals, with no common language with which to engage Raleigh, could only explain that they traveled across a great water and were from Manoa. Raleigh's presumptuous narrative inspired many early cartographers to map this massive lake, with the city of El Dorado or Manoa on its shores, in the unexplored lands between the Orinoco and Amazon River basins.

This map was published in two states. The first, as presented here, was published in the 1628 Latin edition of Jansson's Atlas Minor Gerardi Mercatoris. There were several subsequent editions to about 1651 all featuring the map in the same state. Editions can be identified by the verso text - which in this case is Latin. Several French issues also appeare3d until about 1659. In or around 1710 the map was re-engraved with a new square title cartouche and a compass rose in the Pacific.

Burden, P., The Mapping of North America, no. 221.
Looking for a high-resolution scan of this?