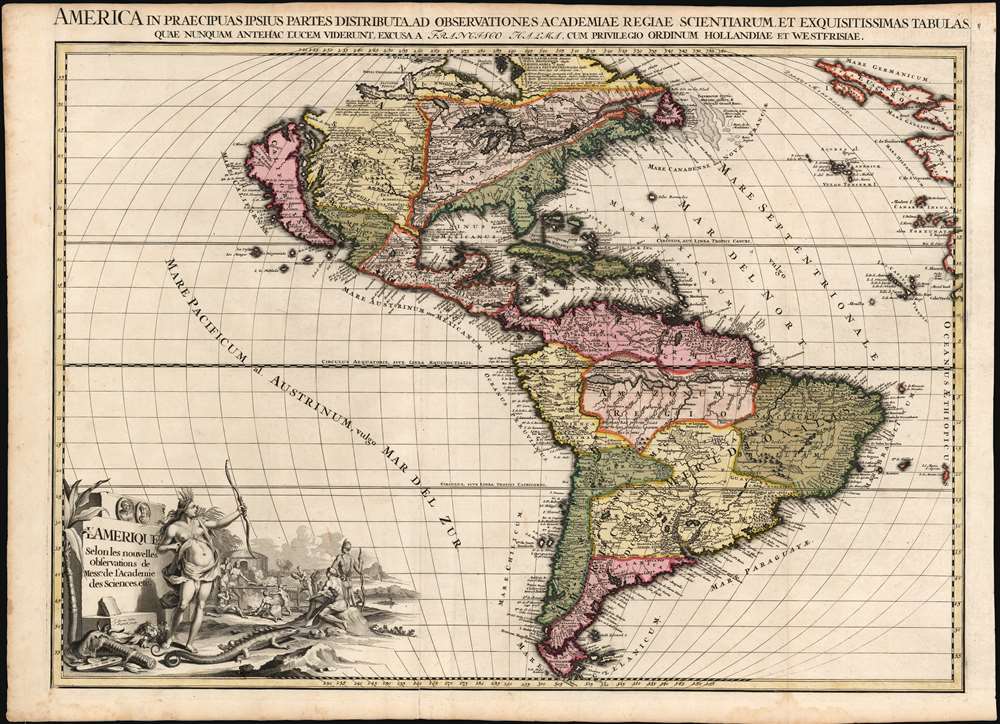 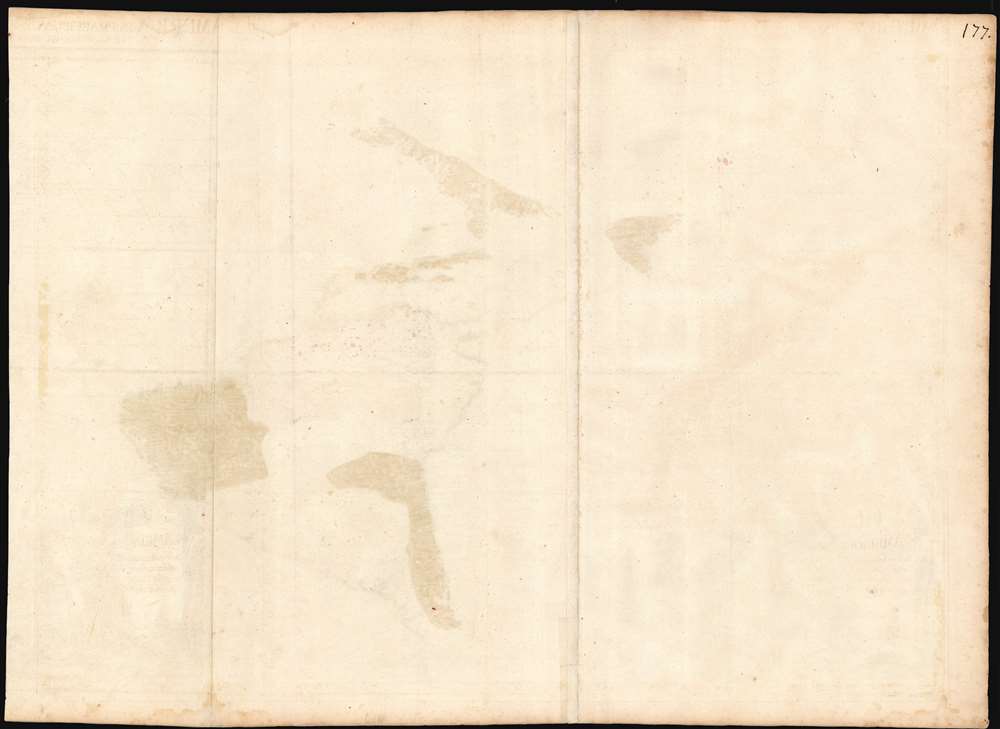 This is the rare first state of François Halma's c. 1699 separately-issued map of America. Its unusually large folio size, bold and sophisticated engraving, and rich original color sets this map apart as one of the most beautiful late-seventeenth century maps of the Americas available to the collector. It dramatically presents some of the most notable geographic ideas of its era, including a prominent insular California after the Sanson model. The Great Lakes and the course of the Mississippi, as well as the rest of the American coastline, closely resembles that of Nicolas de Fer's 1699 L'Amerique.

That geography as presented here shows the Great Lakes and the Mississippi watershed based on state-of-the-art geography of the Académie Royale des Sciences, much of which can be ascribed to Jean Baptiste-Louis Franquelin's firsthand reports. All five Great Lakes are shown and Hudson's Bay is properly aligned. While their southern reaches are better oriented to the east coast than on the preceding Fr. Hennepin maps, the mapping of that coast is confused, with a greatly distorted Chesapeake Bay, an archaic John Smith-era treatment of Virginia, and a meager portioning of New England. The Mississippi, much like the Hennepin maps before it, is reasonably accurate despite the mouth being situated too far west (in the vicinity of Galveston Bay) and the placement of the Ohio River too far south. The map contains an early, reasonably accurate delineation of the Missouri River (Outanes R. on the map).

California is shown in insular form, one of the last instances of this prior to the correction of the myth in the early 18th century. The version presented here is often erroneously referred to as the 'Sanson Model.' The term is in fact derived from a 1635 map of the North American Arctic drawn by Luke Foxe. It was Foxe who invented many of the place names as well as added various bays and inlets to northern California. Among these are Talaaago, R. de Estiete, and the curious peninsula extending westward form the mainland, Agubela de Cato. Foxe's sources remain a mystery and his mapping may be based upon nothing more than fantasy, but Sanson embraced the model wholeheartedly. Although Sanson did not invent this form of insular California, his substantial influence did popularize it with subsequent cartographers. As is often the case with insular California cartography, the Pacific Northwest is left ambiguous with the interior of Canada occupied by speculative lakes and rivers. In the American southwest, the Rio Grande is shown flowing to the Gulf of Mexico (rather than having it empty into the Gulf of California in the frequent 17th century conflation of this river with the Colorado).

Halma's map preserves De Fer's many text annotations explaining specific geographic features and their history, among them the discovery of the strait of Le Maire, discoveries of islands in the South Pacific, the 16th century French exploration of the coasts of New France by Verrazano, Aubert, and Cartier, and the long history of European fishing off the Grand Banks.

The title cartouche is founded on a plinth bearing the images of both Columbus and Vespucci. Before the plinth, a female Native American figure representing America brandishes a bow. Between her and the plinth lies a gruesome, severed head with an arrow through the neck; an alligator prowls the foreground whilst in the background a cannibalistic feast is being prepared.

The map was printed by François Halma, probably after 1699 although it is possible that it shares a source with the De Fer, in which case it is no earlier than 1696. It was masterfully composed by Jan Goeree, and superbly engraved by the unjustly obscure J. Baptist. Halma produced no full-size atlas of his own, but this map was accompanied by similarly grand maps of Asia, Africa and Europe, and likely Halma's 1696 north polar projection world after Cassini. Before 1713 the plates were acquired by Leiden map publisher Pieter van der Aa, who replaced Halma's imprints with his own and included the maps in his 1713 Le Nouveau Théâtre du Monde. Halma's separately issued maps, destined for decorative use or tipping into composite atlases by other publishers, have survived in only a few examples. We are aware of only one other example of this edition of this map coming to the market, and there is but a single example catalogued in OCLC, tipped into a Visscher atlas now held by the Newberry Library.

Very good. Few marginal mends away from printed image, else excellent with a bold strike, attendant to the youth of the plate. Superb original color.