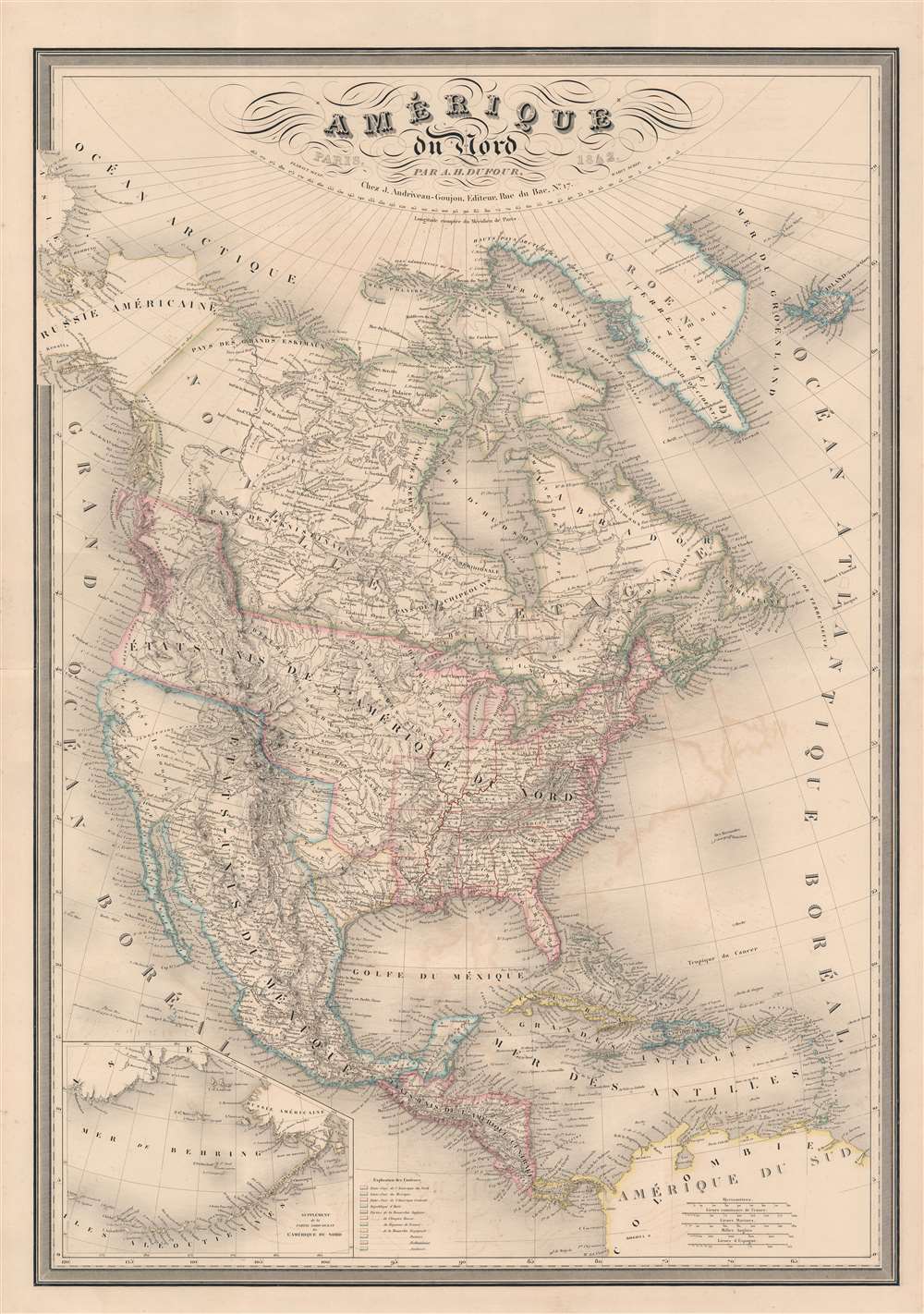 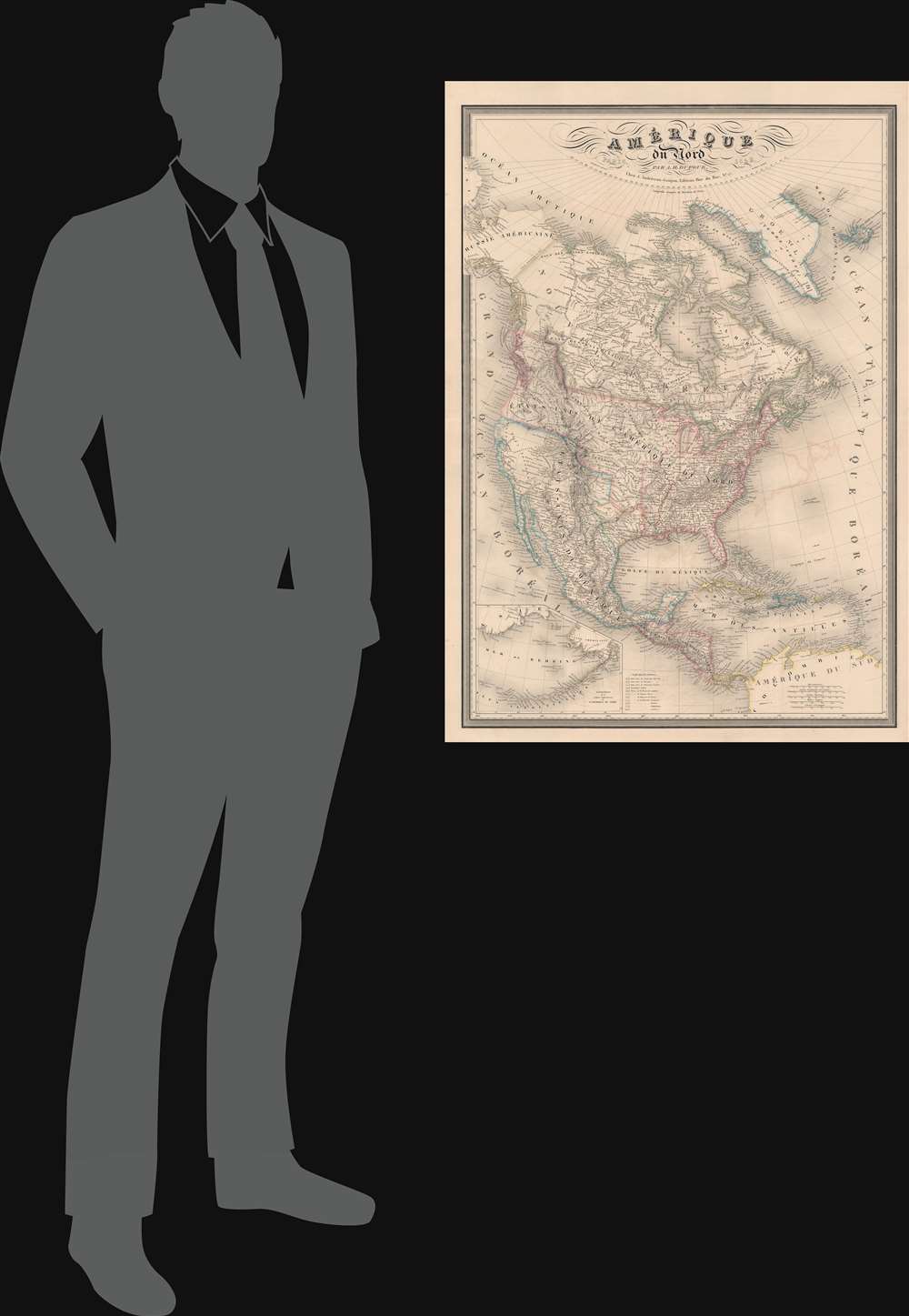 A fine example of A.-H. Dufour's 1842 map of North America, including the Republic of Texas. The map covers the entire North American continent and Greenland, embracing Mexico, an independent Texas, Central America, and the Caribbean. An inset in the lower left corner details the Bering Sea and the Aleutian Islands. This map appeared in several editions of the Dufour/ Andriveau-Goujon elephant folio atlas, but this edition is significant for its inclusion of the Republic of Texas - and as such this makes it one of the earliest European maps to do so. The map also recognizes American claims to British Columbia - further underscoring the then hot political tensions between France and England.

When Texas seceded from Mexico on April 21, 1836, it immediately sought legitimacy through diplomatic appeals to major world powers - most of which at that time were European nations. Most European powers were reluctant to recognize the self-proclaimed Republic until it became clear that it could survive and what diplomatic ramifications, if any, formal recognition might yield. Nonetheless, France under King Louis Philippe recognized Texas on September 25, 1839. This act may have been partially trade inspired, and partially motivated by French antipathy towards Mexico following the First French Intervention or Pastry War (1838 - 1839). Recognizing Texas diplomatically allowed France to open official trade channels, particularly for cotton, a vital commodity in Europe and an increasing cause of tension between France and Britain. Moreover, the recognition of Texas accelerated the destabilization of Mexico, increasing the probability that any colonial aspirations the French may have had in potentially seizing California (something they were considering) would be successful.

The Republic of Texas was a short-lived nation established in March 1836 when it seceded from Mexico. Following the independence of Mexico from Spain, the American Stephen Fuller Austin lead a group of 300 Empresarios to settle Texas, near Austin, where they received a grant from the Mexican government. As more Americans moved to Texas, resentment and strife began to build between the American settlers and Mexican authorities. This and other factors ultimately led to the Texan Revolution in 1835 and the declaration of Texan independence in 1836. Texas remained an independent republic until it joined the United States 10 years later in 1846. France recognized the Republic of Texas early, and as such, this is one of the earliest foreign-published maps to show the nascent nation.

Dufour includes a dramatic presentation of American claims to British Columbia - at the expense of Britain. Following the transcontinental crossing of North America by the British Northwest Company sponsored explorer Alexander MacKenzie (1792 - 1793), and the American expedition of Lewis and Clark up the Missouri to the mouth of the Columbia River (1804 - 1806), it became apparent that control of the fur and resource rich Pacific Northwest would bring wealth and power to whomever could assert sovereignty. The American tycoon John Jacob Astor (1763 - 1848), with the permission of President Thomas Jefferson, was the first to attempt a permeant trading colony in the region, founding Astoria on the Columbia River in 1811. This led to a confrontation with the established British-Canadian Northwest Company over the valuable territory. Americans in the 1820s through the 1840s argued that most of the Pacific Northwest should be part of the United States as a legacy of the 1803 Louisiana Purchase. England, on the other hand, argued for residual claims to the region derived from the MacKenzie Expedition (1825 - 1827) and its fur trading empires: The Northwest Company and the Hudson Bay Company. The Oregon Dispute, as it came to be known, evolved into a geopolitical issue between the British Empire and the United States, especially after the War of 1812. Americans adopted the slogan '54-40 or Fight!' until the Oregon Question was finally resolved roughly along the current borderline by the 1846 Oregon Treaty.

This map was engraved and published in 1842 by Jean Andriveau-Goujon. It was drawn by Adolphe Hippolyte Dufour (1795 - 1865), also known as Auguste-Henri Dufour, and engraved by Jacques-Michel Flahaut. The typography is the work of one 'Warin', or possibly 'Varin', who remains elusive. Variants of the map date to as early as 1829, possibly slightly earlier, and as late as 1887. It was issued both in the Andriveau-Goujon / Dufour Atlas de Choix, ou Recueil des Meilleures Cartes de Geographie Ancienne et Moderne Dressees par Divers Auteurs, and separately as a dissected folding map. While the atlas and the individual maps in it are not rare in late editions, editions with maps depicting the Republic of Texas are exceedingly scarce, as are separate examples of the map. We note no separate examples of the map or the atlas in the OCLC from 1836 - 1845. Scarce to the market.