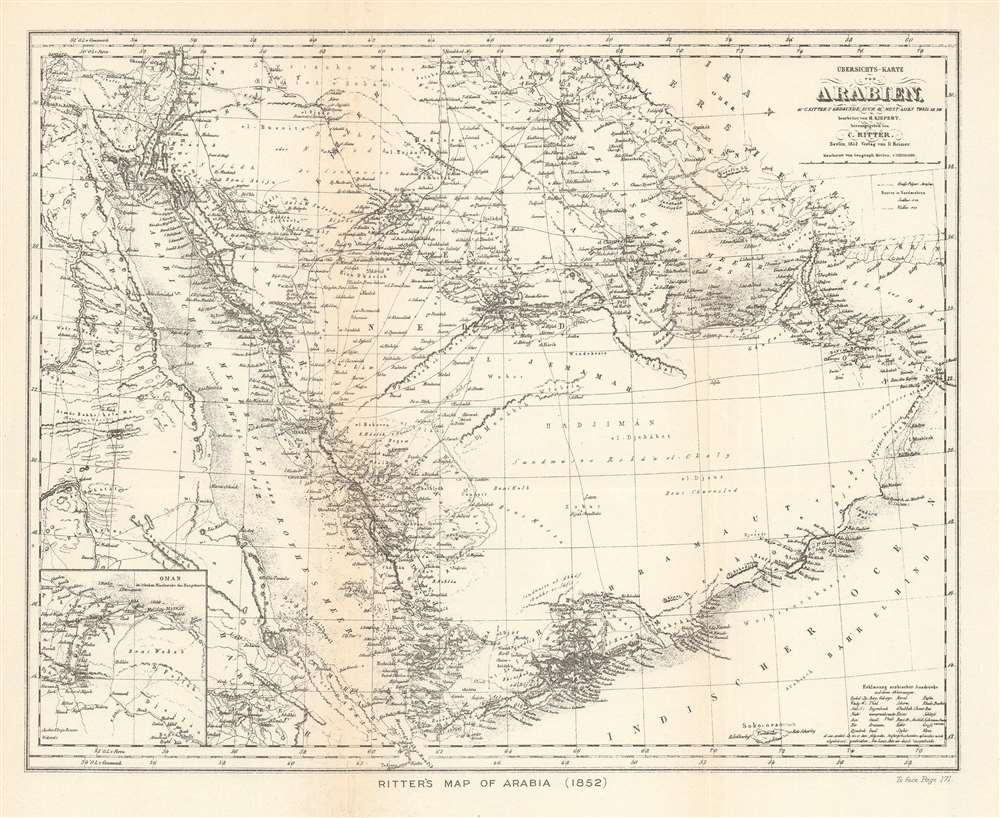 A rare map of the Arabian Peninsula published with a history of Western knowledge of the region.
$250.00

This is a 1904 John Bartholomew map of the Arabian Peninsula. A reduction of Heinrich Kiepert’s Ubersichts-Karte von Arabien, the map centers on the Arabian Peninsula and depicts from Egypt to the Gulf of Oman and from Jerusalem to the Bab-el-Mandeb, the strait between Yemen and Djibouti and Eritrea. Cities, towns, and villages throughout the region are labeled, including Jerusalem, Basra, Kuwait City, and Mecca. The route of the Hajj is noted, as are other trade routes and the routes of two German explorers.

The Penetration of Arabia

Bartholomew created this map for publication in The Penetration of Arabia: A Record of the Development of Western Knowledge Concerning the Arabian Peninsula by David George Hogarth (1862 - 1927). In this work, first published in 1904, Hogarth attempted to recount the history of Western knowledge of the Arabian Peninsula, beginning with the historical geography of Claudius Ptolemy and continuing through the explorations of the early 20th century. As an intriguing aside, Hogarth was an associate of Thomas Edward (T.E.) Lawrence, known to history as Lawrence of Arabia, and helped plan the early stages of the 1916 Arab Revolt against the Ottoman Turks.

This map was created by John Bartholomew from an 1852 map created by Heinrich Kiepert and publisher by Carl Ritter for publication in David George Hogarth’s The Penetration of Arabia in 1904. The separate map is quite rare, both institutionally and on the private market. The Penetration of Arabia is well represented institutionally, but is scarce on the private market.


Carl Ritter (August 7, 1779 - September 28, 1859) was a German geographer. Born in Quedlinburg, Ritter attended the Schnepfenthal Salzmann School from the age of five. This school, which focused on the study of nature, would influence Ritter for the rest of his life. Ritter was introduced to Bethmann Hollweg, a banker from Frankfurt, after he graduated. Hollweg soon arranged for Ritter to tutor his children, in exchange for which Ritter would attend the University of Halle at Hollweg's expense. Ritter began tutoring Hollweg's children in 1798 and continued to do so for the following fifteen years. He even spent 1814 - 1819 in Göttingen to continue this work, which is also when Ritter began to devote himself exclusively to the study of geography. He also married his wife Lilli Kramer and wrote the first two volumes of his masterwork, Erdkunde, during his time in Göttingen. Ritter was named professor of history at the University of Frankfurt in 1819 and gained a position in the history department at the University of Berlin the following year. Ritter received his doctorate from the University of Berlin in 1821 and was appointed the first professor of geography there in 1825. He was elected to the Prussian Academy of Sciences in 1822 and became a corresponding member of the Société Asiatique de Paris two years later. Ritter founded the Berlin Geographical Society (Gesellschaft für zu Berlin) in 1828 and in 1849 was elected a Foreign Honorary Member of the American Academy of Arts and Sciences. He was appointed curator of the Royal Cartographic Institute of Prussia in 1856 and died in Berlin in 1859. His masterwork, Erdkunde im Verhältnis zur Natur und zur Geschichte des Menschen oder allgemeine, vergleichende Geographie, als sichere Grundlage des Studiums und Unterricts in physicalischen und historischen Wissenschaften, consists of 19 parts and 21 volumes, and is one of the most extensive works of geography written by a single author. Learn More...

Very good. Light wear and toning along original fold lines. Blank on verso.
Looking for a high-resolution scan of this?