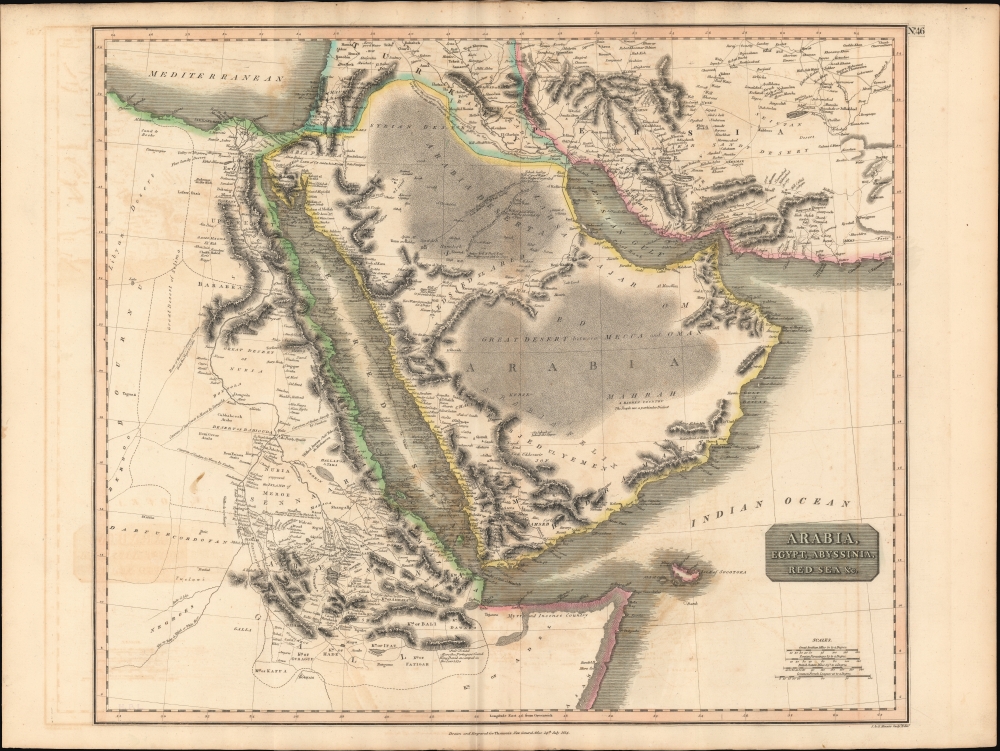 This is an example of John Thomson's 1814 map of Arabia, Egypt, and Abyssinia. Centered on the Arabian Peninsula, Thomson's map covers from the eastern Mediterranean to the Horn of Africa, and from the Libyan Desert to Persia. The whole of this map is beautifully engraved in the minimalist English style pioneered in the early part of the 19th century. Relief is shown by hachure with towns, caravan routes, cities, and major topographical features identified.

To create this map Thomson drew information from various sources including earlier maps and contemporary excursions into the region. He identifies several important pilgrimage routes across the Arabian Desert to Mecca, the great caravan routes from the Nile Valley into the interior of Africa, and the caravan route from Basra to Aleppo. The 1789 route of the frigate Venus through the Red Sea is especially noteworthy. Vice Admiral Rosily and the Venus explored the Red Sea thoroughly and declared it a practical and navigable avenue for European trade. Previously, the Red Sea had a reputation as dangerous and was largely avoided by the larger European trading vessels.

This map is a steel plate engraving by J. and G. Menzies, and was prepared by John Thomson for inclusion in the 1814 first edition of Thomson's New General Atlas.

Thomson, J., A New General Atlas, (Edinburgh: Baldwin, Craddock, Joy) 1814.     Thomson's New General Atlas was first published in 1817 and continued to be published until about 1821. This is the first of Thomson's major cartographic works and the atlas for which is most celebrated. The New General Atlas follows in the Edinburgh School, which eschews excessive decoration in favor of a more minimalistic fact-based cartographic vision, as established by John Pinkerton, Laurie and Whittle, John Cary, and others in the previous decades. The maps are notable for their massive scale, heavy stock, elegant color work, and easy-to-read typefaces. Although the atlas stopped being published after 1821, Thomson continued to offer 'supplementary' maps that could be tipped into the atlas as late as 1830, when he declared bankruptcy. The maps in the Thomson Atlas were engraved by Thomas Clerk, William Dassauville, Nathaniel Rogers Hewitt, James Kirkwood, Robert Kirkwood, John Menzies, George Menzies, Edward Mitchell, John Moffatt, Samuel John Neele, Robert Scott, and James Wyld.