1818 Pinkerton Map of Arabia and the Persian Gulf 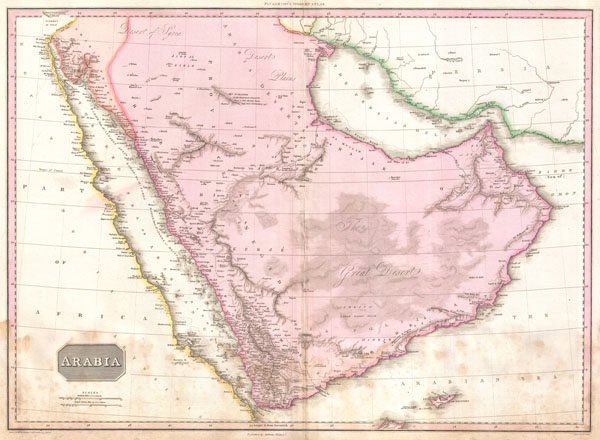 1818 Pinkerton Map of Arabia and the Persian Gulf

Extraordinary large format map of Arabia published in 1818 by cartographer John Pinkerton. Centered on the desert province of Neged, this map details the entire Arabian peninsula as well as the Red Sea, the Persian Gulf, and adjacent parts of Africa and Persia. Covers the modern day countries of Saudi Arabia, Yemen, Oman, United Arab Emirates, Qatar and Kuwait. Pinkerton offers extraordinary detail throughout noting both physical and political details. When this map was made the interior of Arabia was little known in European circles. Most of the cartographic material used to compose this map comes from older sources and from the ill fated expedition of the Danish explorer Carsten Neibuhr. Neibuhr was the sole survivor of one of the few European expeditions to this region in the 18th century. His work had a profound influence on the cartography of this region for some 200 years. This is undoubtedly one the most attractive and influential maps of the Arabian peninsula to appear in the 19th century. Drawn by L. Herbert and engraved by Samuel Neele under the direction of John Pinkerton. The map comes from the scarce American edition of Pinkerton's Modern Atlas, published by Thomas Dobson & Co. of Philadelphia in 1818.