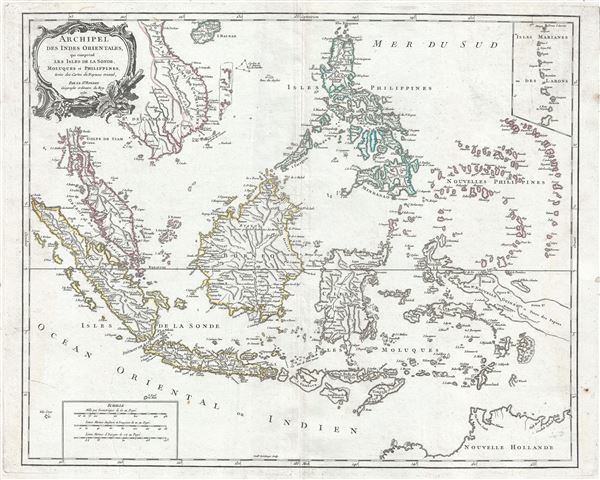 This is a beautiful 1750 map of the East Indies and Southeast Asia by Robert de Vaugondy. It covers from Vietnam and the Gulf of Siam eastward to include Malaysia, Sumatra, Indonesia, Philippines and part of New Guinea and south south as far as the northern coast of Australia (Nouvelle Hollande). Identifies the Island of Singapore (Sincapoura). An inset in the top right quadrant features the Mariana Islands. This map offers splendid detail throughout inclusive of undersea shoals and reefs along the coastlines, mountain ranges, lakes, rivers and towns. New Guinea, which was largely unexplored well into the 19th century, is shown speculatively and remains largely unmapped.

The map includes a beautifully engraved title cartouche in the top left quadrant. This map was engraved by Guillaume Delahaye and drawn by Robert de Vaugondy in 1750 and published in the various issues of his Atlas Universal. Although present in many editions of Vaugondy's Atlas Universal, it exists in only one state.