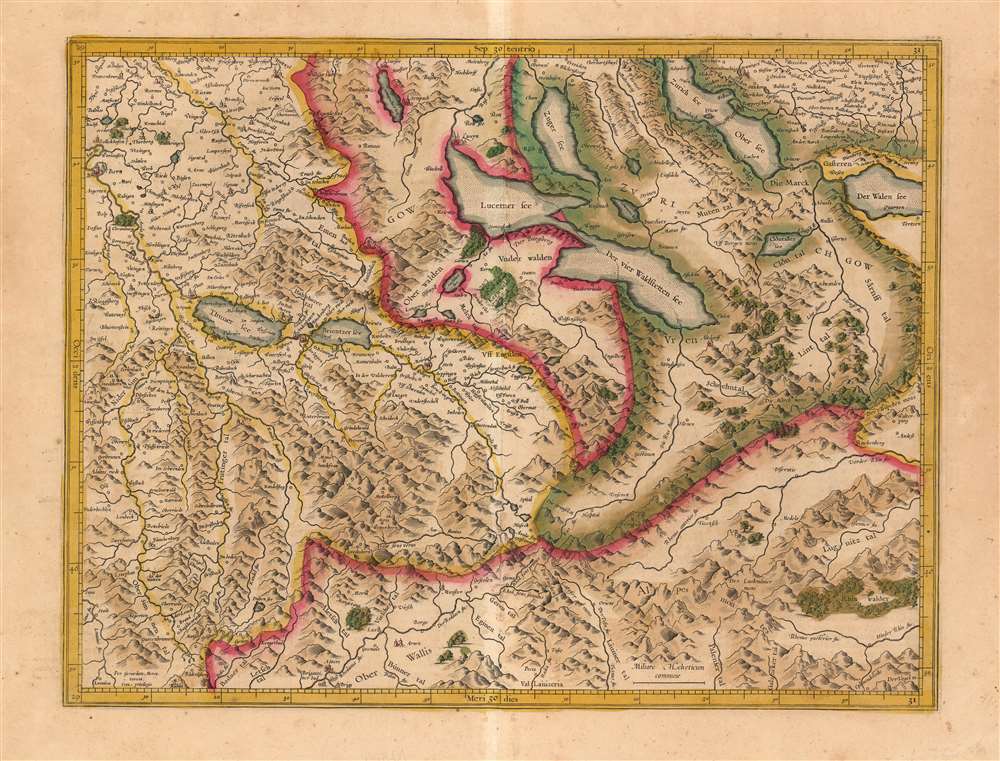 This is Gerard Mercator's map of the Aargau region of north-central Switzerland, from a 1618 edition of Jodocus Hondius' atlas. Mercator's engraving beautifully evokes the mountainous, lake-rich region around Lucerne and Bern. This particular work, with warm, rich color of the period, demonstrates the delicacy and precision of his engraving. His name appears in the lower left hand corner.

This map was first included in Mercator's 1595 Atlas, though it may in fact be earlier: this along with three other sheets (one of which was not included in the atlas) could be joined to make a wall map of Switzerland, which was sold separately: hence, the absence of a cartouche and the other two Switzerland maps in the Atlas.The plates for the whole work were later purchased by Jodocus Hondius, who continued to use them as the basis for his own atlases, gradually adding his own plates to the work. This present map is an example of the first state, and was included in either the 1618 or 1619 French edition of the Hondius atlas. Examples appear on the market from time to time and the map is reasonably well represented in institutional collections.

Mercator, G., Atlas sive Cosmographicae, (Amsterdam : Hondius).     Mercator's Atlas is one of the most important works in the history of cartography. Although in fact Ortelius was the first to publish a proper atlas, the Teatrum Orbis Terrarum, Mercator's Atlas the first book to employ the term Atlas for a collection of maps. The term is derived both from the mythical titan, Atlas, who was forced to bear the world upon his shoulders, and the Libyan king, philosopher, and astronomer of the same name that, so the legend goes, constructed the first globe. Mercator dedicated the final 25 years of his life to compile the Atlas. He published two parts during his lifetime in 1585 and 1589, but the final part published posthumously by his son Rumold Mercator, in 1595. The map plates for the Atlas were later acquired by Jodocus Hondius who published the most complete and well known edition in 1606. It was Jodocus who popularized the Atlas and who did the most to elevate Gerard Mercator's work.