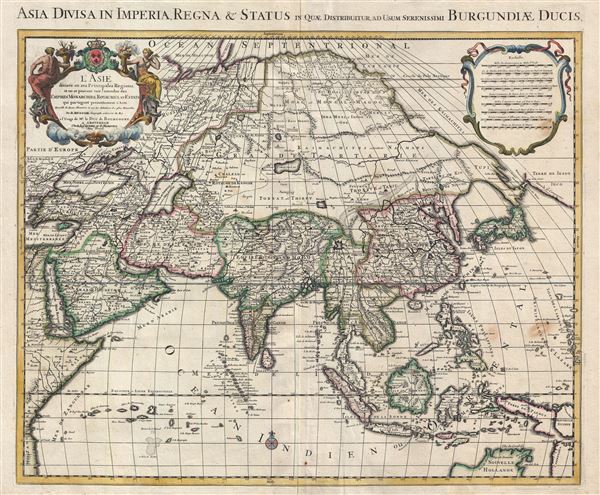 An attractive and large map of Asia issued by the Dutch firm of Covens and Mortier c. 1730. Covens and Mortier based this map upon an earlier map by Guillaume Delisle, which was in turn based upon the Sanson-Jaillot model of 1692. Presented on Sanson's Sinusoidal (a pseudocylindrical equal-area) projection, this map covers from the Aegean to Japan and from Nova Zembla to northern Australia. Oceanic depths are rendered with shading and topography is presented in profile.

This map is a fine illustration of just how little was known of Asia even in the early 18th century. Nonetheless, there is much here of interest. The Caspian Sea is wildly malformed, the Crimea is an island, mysterious uncertain lakes appear throughout Central Asia, the myth of Lake Chiamay is preserved in modern day Thailand, and northern Japan and northeast Siberia are entirely speculative.

This map is most striking for its speculative and barren illustration of Asia east of the Caspian Sea and north of India and China. At the time these lands were largely unknown and the cartographer is here assembling cities, mountains, rivers, and kingdoms primarily from second and third hand reports combined with mythology. One notes the Biblical kingdoms of Gog and Magog hidden behind a non-existent mountain range in northern Siberia. This is a reference to the writings of the Italian adventurer Marco Polo, who mentions these kingdoms in his journals. It was widely believed according to the Biblical book of Revelation that during the apocalypse the hordes of evil, Gog and Magog, would burst forth from behind this mountain range to terrorize the world.

The lands to the north and northwest of Japan bear some note. Here modern day Hokkaido, the southern parts of which are vaguely recognizable, is attached to the Yupi peninsula (Sakhalin). Beyond we can see several island territories including Terre de Etates, separated by the Detroit de Vries from Terre de Iesso, Ieco, or Terre de la Compagnie. Iesso or Ieco are typically terms associated with Hokkaido, but here the cartographer has moved the toponymy further east to the wildly oversized mapping of the Kuril Isalnds. The cartography here is a reference to the explorations of Dutchmen Maerten de Vries and Cornelis Jansz Coen. Searching for mythic islands of silver and gold (what's new?) the navigators stumbled upon the Japanese Kuril Islands. The smaller of these islands, modern day Kunashir, is presented with reasonable accuracy and here identified as Terre de Etates. The land to the east, thrice labeled Terre de Iesso, Ieco, or Terre de la Compagnie, is the island of Iturop, whose coast they did not explore but to which they nonetheless postulated fantastic size.

The reminder of the map follows the established convention of the period. The Indian subcontinent is notably narrow and Southeast Asia and the East Indies are remarkably well mapped. The northern shores of Australia as well as New Guinea are unknown and have boarders than fade into and out of one another. At the southern tip of the Malay Peninsula, Jahor is identified as Ihor.

This map was issued for the c. 1730 Covens and Mortier reissue of Delisle's Atlas Nouveau.