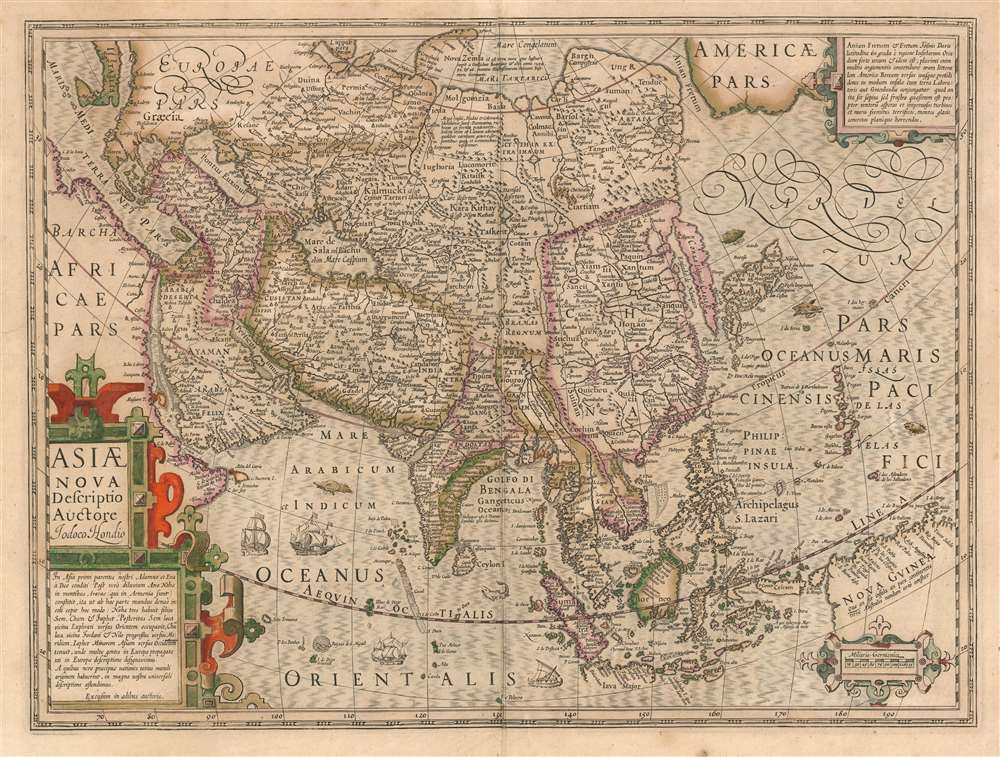 This is a 1628 Hondius map of Asia in lovely original color. The map extends across the Pacific to include New Guinea, the Philippines, and part of North America. While the interior still contains place names and geographical features that would have been familiar to Strabo, Ptolemy and Marco Polo, the coastline of Asia is filled with contemporary detail. The coastline of the subcontinent shows access to the best Dutch cartography of the late 16th century. Japan and Korea appear as they do on Ortelius' 1584 map of Japan, with Korea shown as a large island. The map shows part of North America across the mythical 'Strait of Anian*'The southeast portion of the map includes Sumatra, a recognizable Malay Peninsula, and a reasonably well-informed treatment of the Philippines and the Spice Islands. New Guinea appears with a Latin note stating 'whether it is an island or part of a southern continent is not yet evident.' In the north, the Barentz's discoveries for the Dutch in and around Nova Zemla are noted and dated.

In 1604, Hondius acquired the plates from Gerard Mercator's Atlas, and set about reviewing and revising them for publication in new editions of the work. While some of the maps were changed but little, this was among the maps that Hondius completely replaced in 1606. There was good reason to replace the map. Mercator's map was out of date when it hit the press: his treatment of China and Japan had been rendered obsolete by Ortelius' maps of those areas printed in the 1580s. Moreover, since the completion of Mercator's work, Jan Van Linschoten's Itinerario had been published with its new, vastly improved charts of the subcontinent and of Southeast Asia. Hondius' map incorporates the China/Japan cartography of Ortelius as well as the state-of-the-art geographical information derived from Linschoten to produce a map which would not be substantially improved upon until the end of the 17th century. Aesthetically, is a superb example of Hondius' work, characterized by an elegant strapwork cartouche, delicate hachure for water areas, four ships and five sea monsters.

*That there would eventually be found, by Bering, an actual strait in that rough location does not make the Strait of Anian any less mythical. In spite of it showing up on maps for more than a century, Europeans really had no actual idea what was going on up there.