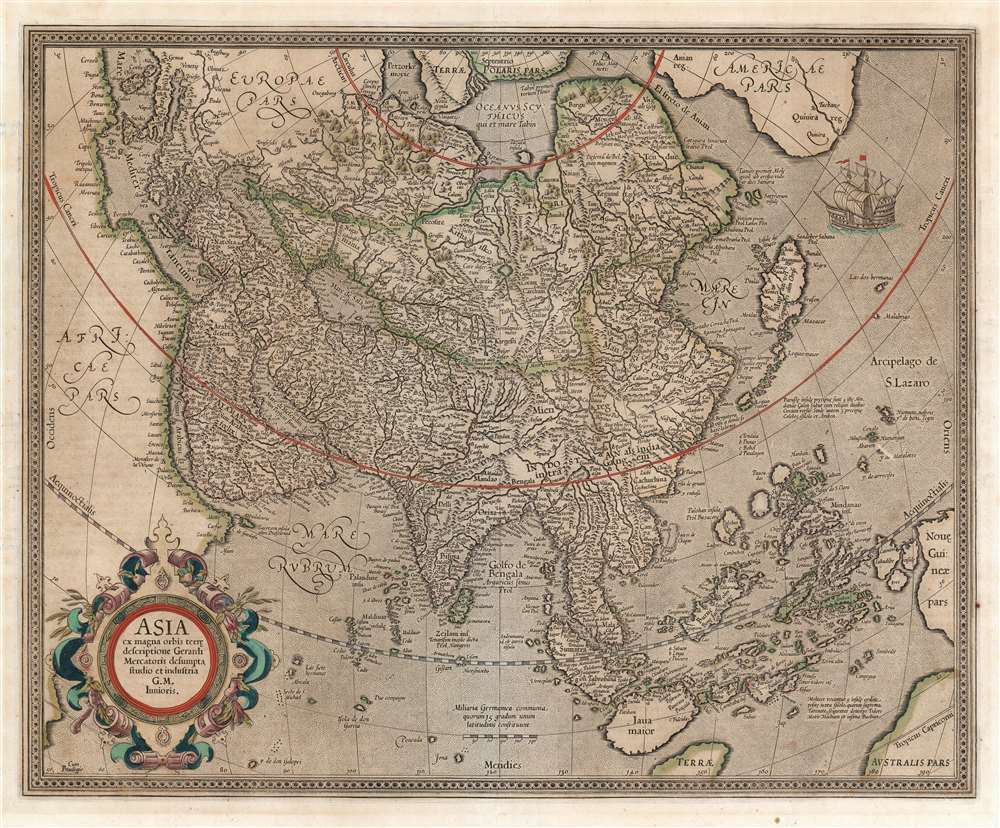 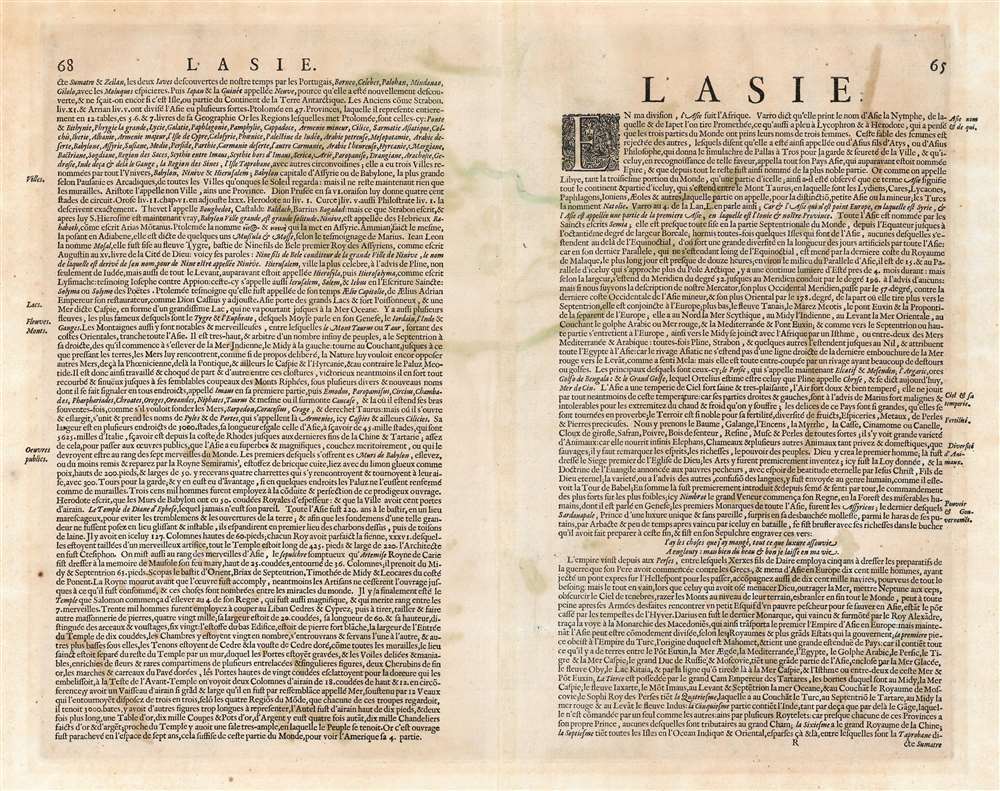 The Great Mercator's Map of the East.

This is Gerard Mercator's 1595 map of Asia, the second map of the continent to appear in an atlas. It presents Asia as it was understood at the beginning of the Dutch effort to extend power into the Spice Islands, and at the dawn of the effort to discover alternative routes to them that would bypass the Portuguese lock on the Asia trade. The map extends across the Pacific to include New Guinea, the Philippines, and part of North America. While the interior still contains place names and geographical features that would have been familiar to Strabo, Ptolemy and Marco Polo, the coastline of Asia is filled with contemporary detail. The coastline of the subcontinent shows access to the best Dutch cartography of the late 16th century. The map shows part of North America across the mythical 'Strait of Anian.' In addition to the place name Anian, America contains several other place names, notably Coronado's 'Quivira,' the hoped-for location of the legendary seven cities of gold. The southeast portion of the map includes Sumatra, a recognizable Malay Peninsula, and a reasonably well-informed treatment of the Philippines and the Spice Islands. Sri Lanka appears in its proper location and correct naming (Zeilam ins.) rather than the Ptolemaic Taprobana; a note assigns that name as the name for Sumatra known in antiquity. New Guinea appears in part, and in the lower right corner is a glimpse of 'Terrae Australis Pars': not, alas, an early glimpse of the modern continent of Australia, but the northern extent of the then-undiscovered and legendary terra Australis, or Antarctica. In the north, there is yet no note of Barentz's discoveries for the Dutch in and around Nova Zemla, and there is shown a portion of Mercator's Terrae Polaris: two of his four Arctic landmasses appear. Japan is shown in the early, 'kite' shaped form that appeared on Mercator's 1569 world map; Korea does not yet appear.

The map's rich array of place names are elegantly and clearly engraved, predominantly in the Italic font whose use in maps Mercator had pioneered. The map is embellished with a beautiful strapwork cartouche, and a fine sailing ship appears ready to sail north between Asia and America (a feat which would not be achieved until the 18th century; at the time this map was printed the separation of the two continents had not yet been established as fact.)

This map appeared first in 1595. Oddly, it continued to appear in Hondius editions of the Atlas, despite the elder Jodocus Hondius having engraved a thoroughly updated version of the map in 1606. Indeed, examples of this map were in print as late as 1633, three years after Hondius' replacement was, itself, replaced. The verso text of the present example conforms with the 1628 French edition, published by Jodocus' heir Henry. We see sixteen examples of the separate map listed in OCLC.

Hondius, H., Atlas, editio decima. (Amsterdam: Hondius) 1628.     Mercator's Atlas is one of the most important works in the history of cartography. Although in fact Ortelius was the first to publish a proper atlas, the Teatrum Orbis Terrarum, Mercator's Atlas the first book to employ the term Atlas for a collection of maps. The term is derived both from the mythical titan, Atlas, who was forced to bear the world upon his shoulders, and the Libyan king, philosopher, and astronomer of the same name that, so the legend goes, constructed the first globe. Mercator dedicated the final 25 years of his life to compile the Atlas. He published two parts during his lifetime in 1585 and 1589, but the final part published posthumously by his son Rumold Mercator, in 1595. The map plates for the Atlas were later acquired by Jodocus Hondius who published the most complete and well known edition in 1606. It was Jodocus who popularized the Atlas and who did the most to elevate Gerard Mercator's work.