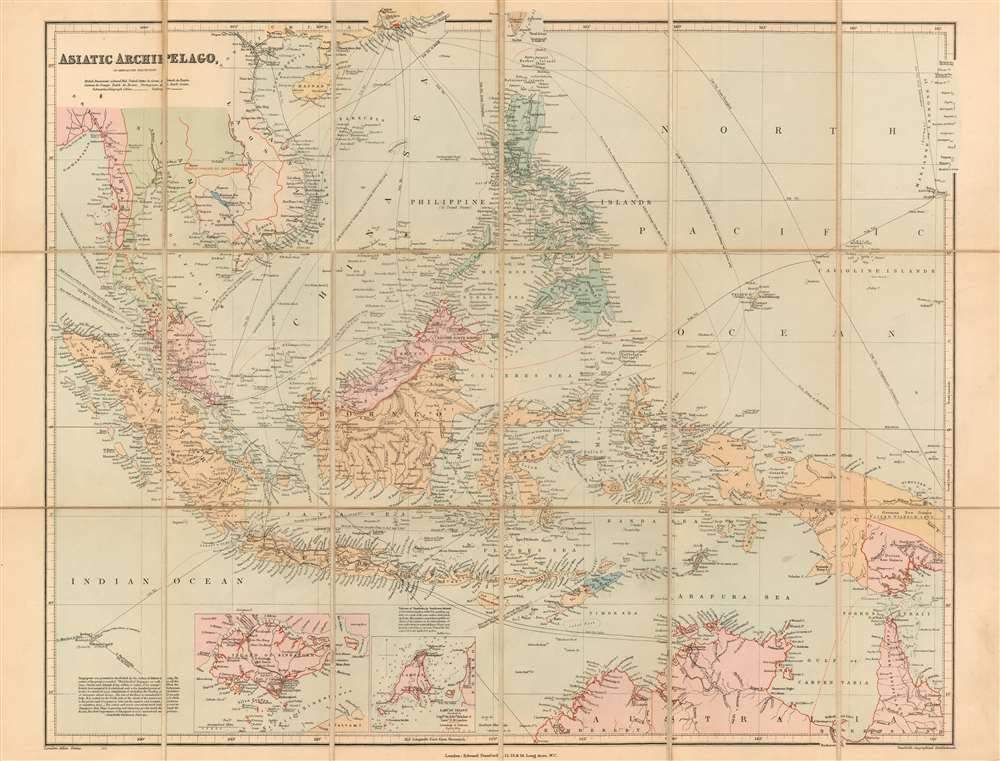 A Remarkably Long-Lived and Updated Map
$950.00

This is John Arrowsmith’s map of Southeast Asia and the East Indies, in an updated c. 1906 issue published by Stanford in the early 20th century. This map achieved an astonishing longevity via frequent updates. Though it retains Arrowsmith’s notations - for example, pointing out the best seasonal routes to China, and describing the catastrophic 1815 volcanic eruption of Mount Tambora - the map would be amended as early as 1848. From its earliest inception the map included its inset of Singapore Island. An additional inset featuring Labúan Island ’Captain Sir Edward Belcher and Lieut. D. M. Gordon’ appears on examples of the map as early as 1848 - an impressively up-to-the-minute change, as the survey in question was not published by the Admiralty until 1847. Hong Kong is marked in red - naturally - The French and British spheres of influence in the vicinity of Siam are marked in red on the map, roughly conforming to the treaties between France and Siam following their 1893 war. Guam has had its spelling altered from the earlier ‘Guahan’ and its association with the United States is noted. New Guinea - completely undefined in Arrowsmith's first iteration of the map - has had its coastline completed and its interior mapped. Its borders reflect the division of the island between the Dutch, the British, and Germany between 1884 and 1919, with German New Guinea named ‘Kaiser Wilhelm Land.’ Over the course of the map's publication, the interiors of Borneo, Singapore, and Australia were completely reworked.

Railways are shown in Burma, Siam, French Indochina, Java, the Philippines, and Australia. The North Australian Railway can be seen at its extent in about 1889; it does not yet (as it would in 1917) reach the Katherine River. The map shows the Singapore-Kranji Railway bisecting Singapore Island: This railway was completed in 1903, as was the line in British North Borneo from Beaufort to Jesselton. A further extension of this railway from Beaufort to Tenom was completed in 1906: this branch is shown on the map.

John Arrowsmith first published this map in 1832; it would remain in publication, assiduously updated and amended, apparently for over a century (OCLC shows a 1936 example.) The extent of the railways in British North Borneo suggests an early date of 1906 for the map. The colonial borders in New Guinea would tend to indicate a date no later than 1918.