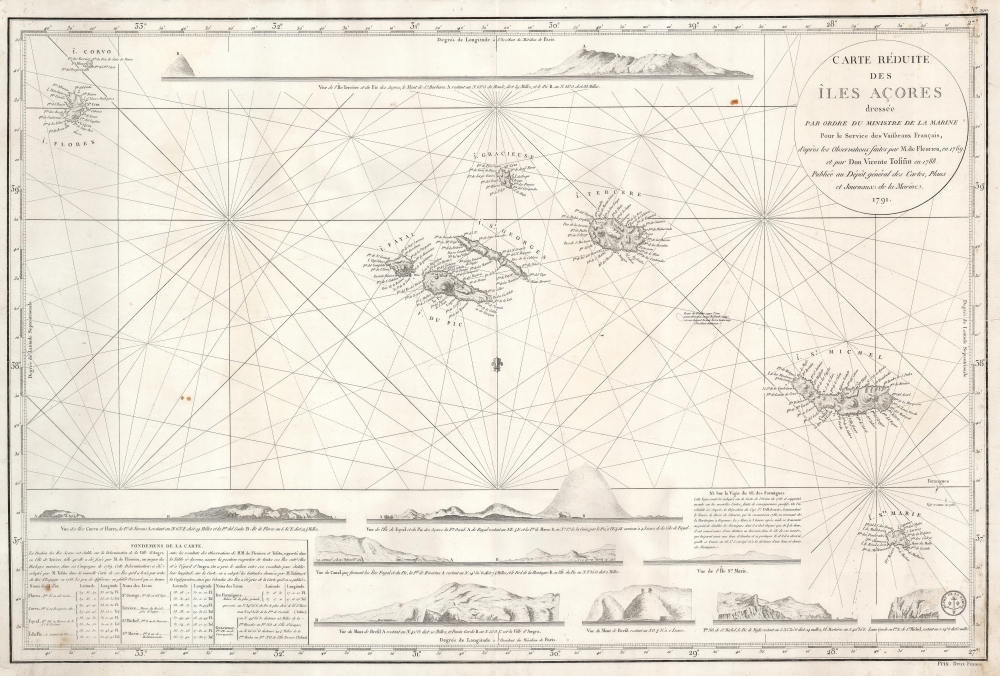 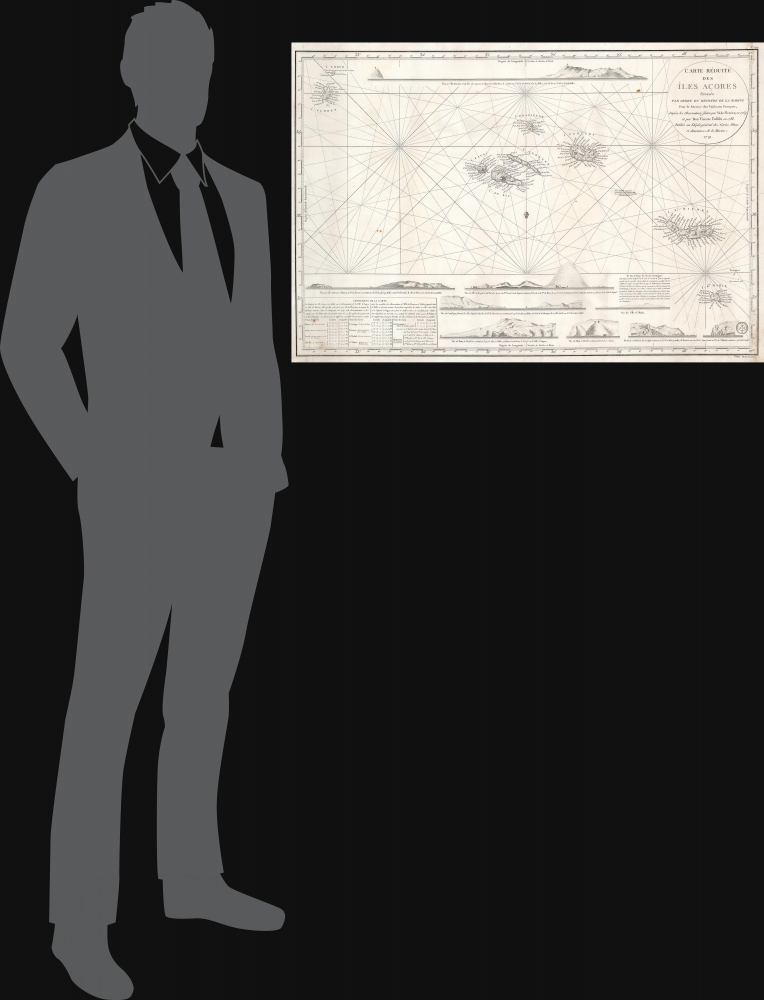 First French chart of the Azores made employing modern instrumentation.
$1,200.00

This elegant, separately-issued, Depot de la Marine nautical chart / map of the Azores is the first to employ modern nautical surveys using marine chronometers. This chart combines the data of the French hydrographer Charles Pierre Claret, Comte de Fleurieu (1738 - 1810), with that of the Spanish hydrographer Vincente Tofiño de San Miguel (1732 - 1795), whose respective surveys represented the first scientific charting of the Azores. It represents a vast improvement over the 1755 Bellin Carte Réduite des Îles Açores, which, until 1791, was the best French charting of the islands.

The main source for topography and toponymy is Vincente Tofiño de San Miguel's 1788 Carta esferica de las Islas de los Azores o Terceras. A bank between the islands of Tercera and St. Michael has been added, as well as a small island southeast of the Formigues islands spotted by French mariners in 1788. This chart employs rhumb lines where the Tofiño uses latitude and longitude. The most significant visual difference between the Tofiño and the Depot are the latter chart's nine beautifully engraved coastal views. These all are far superior to those found on the 1755 Bellin and show the benefit of a more recent survey.

Claret de Fleurieu's contributions to the map are dated 1769, when he was in command of the frigate Isis, engaged in testing the new secret marine chronometers produced by Ferdinand Berthoud. The chronometers were employed throughout the voyage, which set out from Rochefort in 1768 and made for Santo Domingo by way of the Azores. The measurements taken off the Azores during this period represent the first scientific charting of those islands using modern instrumentation (and proved the efficacy of the French marine chronometers in navigating the transatlantic crossing). Claret de Fleurieu's observations do not appear to have been committed to any prior chart, though they were published in the 1773 Voyage fait par ordre du roi, pour éprouver les horloges marines in which the successful tests of the Berthoud chronometers were reported. The French data has been applied to the more recent Spanish chart, and used to confirm the accuracy of both, as is explained in the chart's text (here translated from the French):

The slight difference, or rather the agreement, which is found between the results of the observations of M. de Fleurieu and M. Tofino, reported in the table below, assures the position of all these islands with respect to Angra. We have taken the middle between these results to establish their longitude on the map: we have adopted the latitudes given by M. Tofino, and the configuration, as well as the understanding of the islands, has been taken from the map that he has published.

We have identified seven examples of this chart in institutional collections. We are not aware of any further issues or state changes.


Charles Pierre Claret, Comte de Fleurieu (July 2, 1738 - August 18, 1810) was a French explorer, and hydrographer. He served in the French Navy from the age of 13, campaigned in the Seven Years' War, and quickly became regarded an officer of distinction and intelligence. By 1765 he was engaged under Ferdinand Berthoud in the French efforts to produce a marine chronometer, the great 18th century arms race against Britain to determine a method to calculate longitude at sea. He was in command of an expedition aboard the frigate Isisin order to test Berthoud's chronometers at sea between autumn 1768 and October 1769 (as well as to observe the transit of Venus of June 3, 1769). By 1776 Fleurieu had been named capitaine de vaisseau,  and he was made director of ports and arsenals in 1777 by Louis XVI. He directed nearly all planning for French naval operations in the during the American Revolution, and all the French voyages of discovery during that period (including, for example, those of La Perouse). He continued to flourish under the Ancien Regime, but oddly his decades of loyal service seem to have been overlooked during the French Revolution which - as well as the Reign of Terror - he survived. He was able to return to service as a member of the Bureau des longitudes and became a member of the Institute de France, After the fall of Robespierre he was made a member of the Bureau des longitudes and of the Institut after M. de Bougainville's resignation in 1795. In 1797 (year V) he was elected deputy for the Seine in the Council of Ancients under the name Claret-Fleurieu. He remained so until the coup d'état of 18 Fructidor when he was excluded from the Council. He was elected a member of the Conseil d'État on 24 December 1799, and during the French First Empire he would become a successful politician until his sudden death in 1810. Learn More...