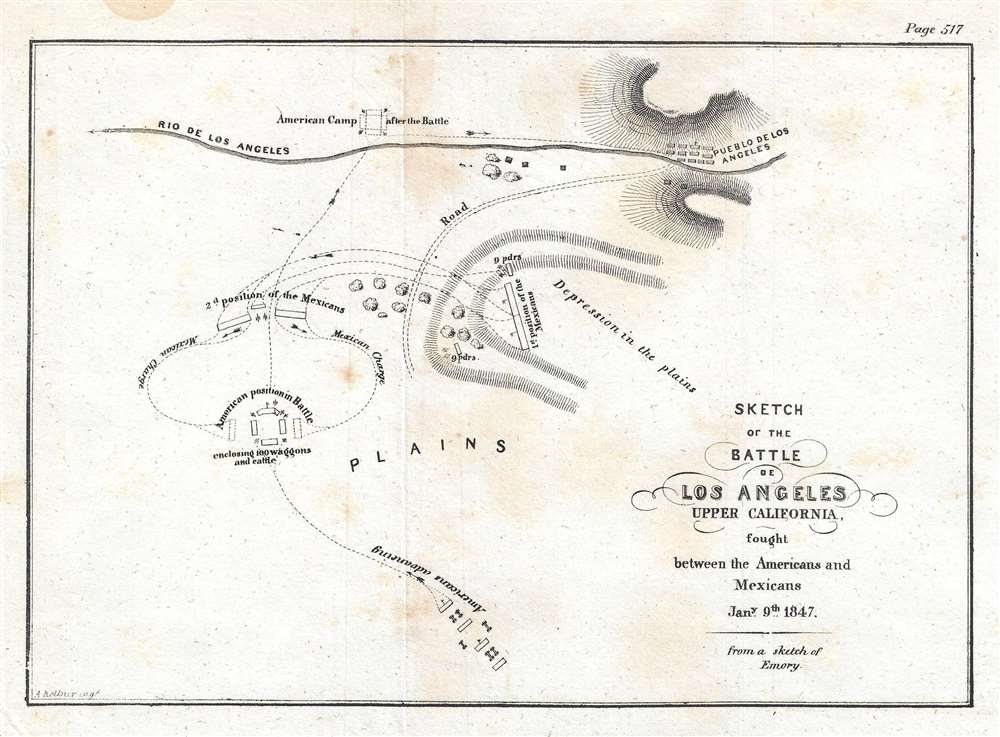 A map of a Mexican-American War battle that took place in Pasadena.

This is an 1847 William Hemsley Emory map of the Battle of Los Angeles, California, which occurred on January 9, 1847. The map depicts the American contingent led by Commodore Robert F. Stockton in the final day before the force reached 'Pueblo de Los Angeles'. Although only a sketch, the map details the last engagement between Stockton's contingent and the Californians under the command of Jose Maria Flores.

The Battle of Los Angeles

This final engagement took place at La Mesa (located in modern-day Pasadena), after Flores and his men had suffered a defeat in the Battle of San Gabriel. The march on January 9th began at 9 a.m. and followed closely followed the same route as today's Olympic Boulevard. Californian scouts and small raiding parties harassed the advancing troops, but nothing more serious materialized. That changed after Stockton's column entered La Mesa, a wide plain south of Los Angeles. Flores and his men appeared on a high crest to the right of the Americans, who had a ravine on their left. The American forces, commanded by General Kearny, formed a box around their supplies and livestock, and prepared to be charged. After an exchange of artillery fire, the Californians charged and tested all sides of the box, but to no avail. The Americans' superior firepower was too much for the attackers. After the Californians withdrew, the American force continued across La Mesa and eventually forded the Los Angeles River close to what is today the Washington Boulevard crossing.

This map was engraved by Augustus Kollner from a sketch by William Hemsley Emory and published in 1847. Though fairly well represented in institutional collections, this map rarely appears on the private market.