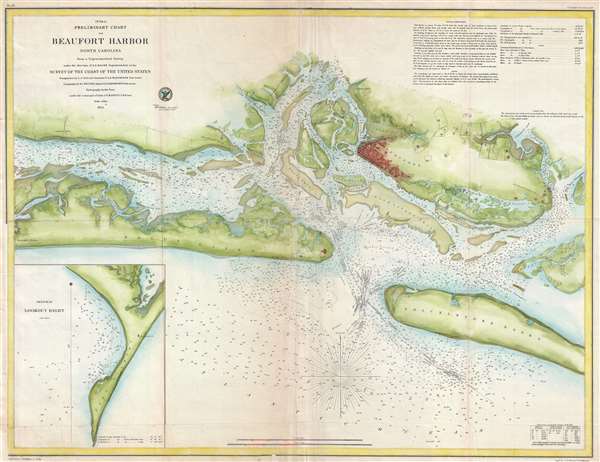 Where Blackbeard's flagship 'The Queen Anne's Revenge' ran aground!

This is a scarce hand-colored 1854 U.S.C.S. maritime map or nautical chart of Beaufort Harbor, North Carolina. The chart depicts the North Carolina coast from Carolina City westward through Beaufort as far as Lenoxville Point. It features superb inland detail of the region as well as innumerable depth soundings, indications of various shoals and breakers, and detailed sailing instructions. An inset map in the lower left quadrant shows Lookout Bight or Cape Lookout. In 1718 Blackbeard the pirate ran his flagship, the Queen Anne's Revenge and his sloop Adventure, aground near present-day Beaufort Inlet, bringing fame to the region.

This map was prepared under the direction of A.D. Bache for the 1854 edition of the Annual Report of the Coast Survey. The triangulation was accomplished by C. P. Bolles and A. S. Wadsworth. The topography is the work of H. L. Whiting and A.S. Wadsworth. The hydrography was assembled by various parties under the Command of Lieutenant Commander J. N. Maffitt. Although Coast Survey maps in general are rather common, this chart, published in only one edition of the report, is extremely scarce and only the second example we have come across.

Bache, A. D., Report of the Superintendent of the United States Coast Survey, Washington, 1854.

Very good. Lower left margin remargined. Backed on archival tissue for stability. Blank on verso.
Looking for a high-resolution scan of this?