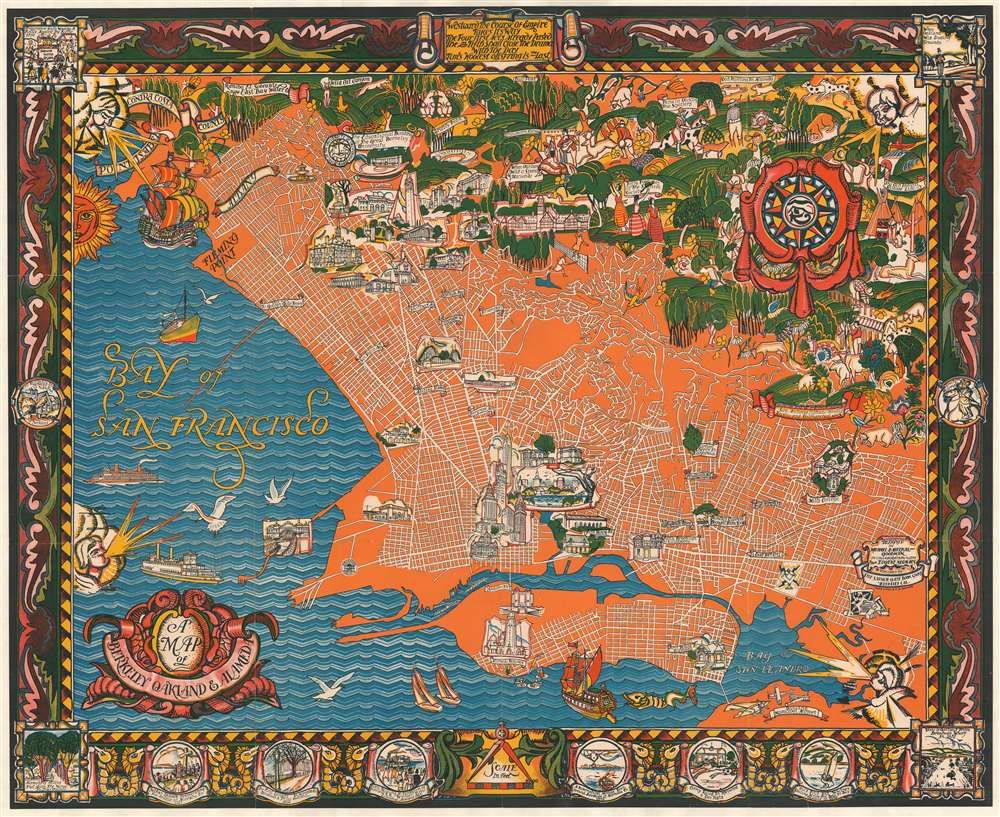 This is an outstanding c. 1930 large-format art deco chromolithograph pictorial map of Berkeley, Oakland, and Alamada County, California. The map was issued by the Berkeley artists Michael A. Baltekal-Goodman and Eugene (Eugen) Neuhaus, both then at U.C. Berkeley. Coverage extends from the San Francisco Bay to the Berkeley Hills. The artists have employed a bold color scheme that contracts the blue of San Francisco Bay with the orange and white Berkeley-Oakland street grid. Pictorial elements include vignette illustrations of significant buildings and other attractions. In the hills to the northeast, the focus is more on cultural references, natural beautify, and wildlife. The map features a decorative border with numerous vignettes illustrating historical events, ranging from an 1874 temperance protest to dueling.

This map was drawn and compiled by Michael A. Baltekal-Goodman and Eugene (Eugen) Neuhaus. Although undated, most conventional wisdom date it to about 1930, when Baltekal-Goodman was studying under Neuhaus, then a professor at Berkeley. It was prepared for the Sather Gate Book Shop, in Berkeley, and printed by Union Lithography of San Francisco and Oakland. Examples are uncommon on the market. The map is accompanied by its original envelope.

Michael A. Baltekal-Goodman (January 7, 1903 - April 12, 1991) was Lithuanian-American artist, wood engraver, pastelist, and architect active in California in throughout the 20th century. Baltekal-Goodman was bor in in Lithuania and immigrated to the united states in 1921, settling in Berkeley California, where he studied at the UC Berkeley school of architecture. There is studied under Ray Boynton, Perham Nahl, and Eugen (Eugene) Neuhaus. He collaborated with Eugen Neuhaus on at least one map, a pictorial image of Berkeley, California. During the Great Depression, in the 1930s he was involved with the local WPA (Works Projects Administration). After graduating from UC, he worked for the architecture firm of Timothy Pflueger, Willis Polk, and Bernard Maybeck. He also collaborated with Diego Riviera, who painted him. Baltekal-Goodman died at his Berkeley home in 1991. Learn More...


Eugene (Eugen) Neuhaus (August 18, 1878 - October 29, 1953), was a German-American artist and professor active in Berkeley, California. Neuhaus was born in Barmen, Rhin Province, Germany. He studied at the Elberfield Realgymnasium, the Kassel Royal Art School, and the Berlin Royal Institute for Applied Arts. In worked as an art instructor at the Municipal Art School, Charlottenburg, Berlin, before emigrating to the United States in 1904. He was subsequently naturalized as a U.S. citizen in 1911. He began working with the University of California Berkeley in 1907, teaching in the drawing department from 1908. He became an assistant professor of decorative design in 1915, and upon the formation of the Department of Drawing and Art in 1920, he became assistant professor of art appreciation. Learn More...


Union Lithography Company (1888 - 1948) was a San Francisco and Oakland based printing concern active in the late 19th and early 20th centuries. The firm was originally founded 1888 by the former Providence, Rhode Island printer, Jennison Clifton Hall (March 22, 1840 - May 20, 1898), as J. C. Hall and Company. Previously, Jennison was running a firm in Providence partnered with John E. Bugbee under the imprint of Bugbee and Hall. J. C. Hall and Company was renamed Union Lithography sometime around 1890. Hall died unexpectedly of a heart attack in 1898, but the firm continued. The firm met with considerable success until its offices were destroyed during the 1906 San Francisco Earthquake. Later that year, to supplement their crippled printing capacity, Union purchased the Los Angeles Lithographic Company. Union was purchased by the H.S. Crocker and company in 1922, but retained its name until 1936, when the firms began publishing under the unified Crocker-Union imprint. The consolidated firm remained active until about 1948. Learn More...

Good. Laid down poster-style on linen.