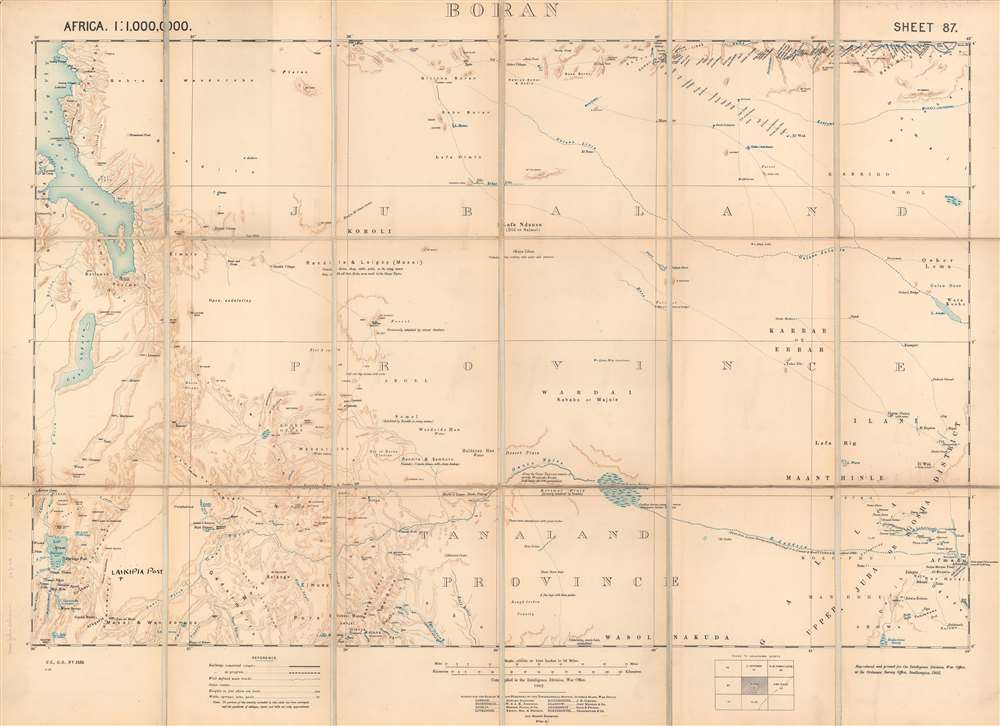 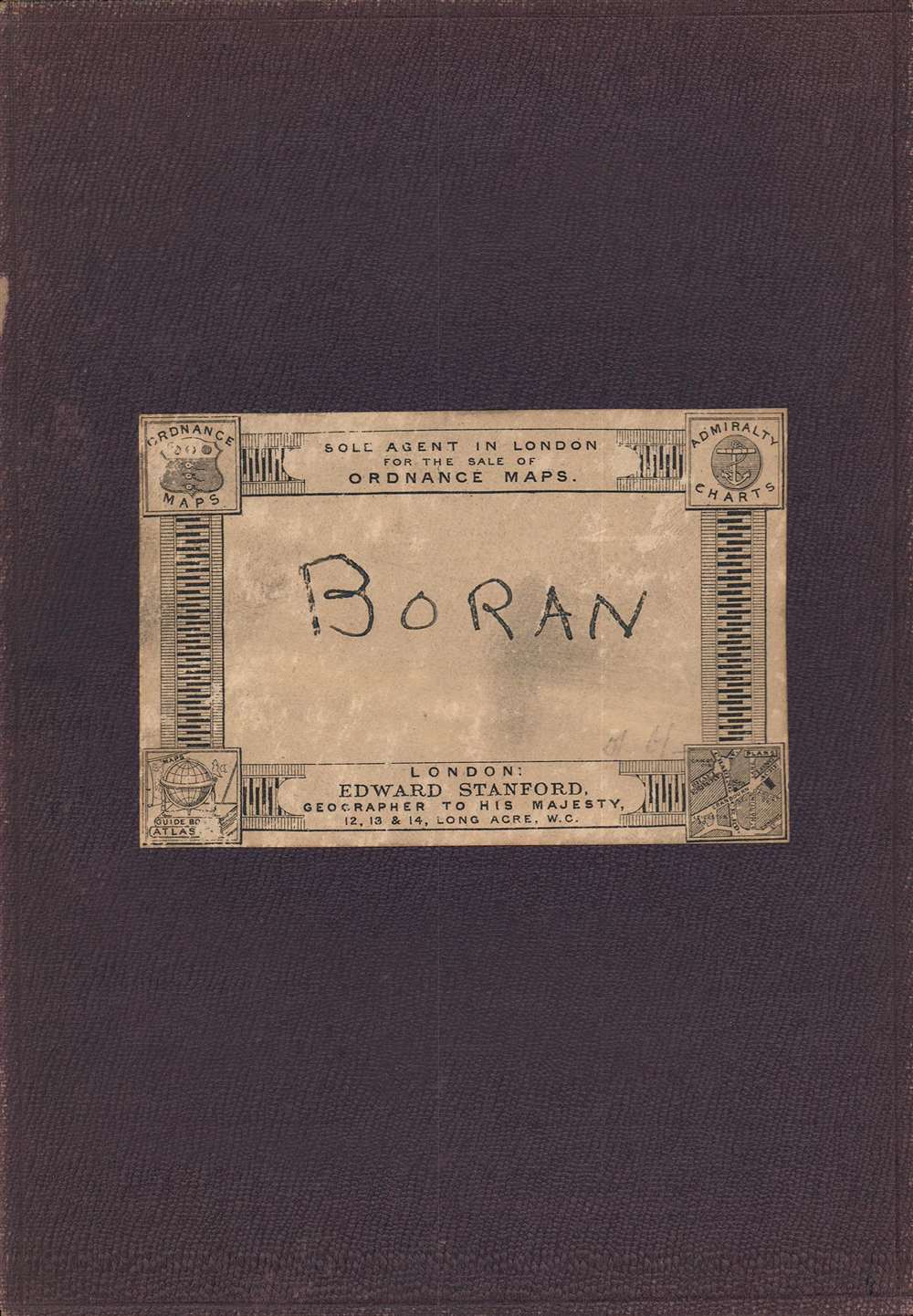 One of the last frontiers in the Scramble for Africa.
$800.00

This is a 1903 British Ordnance Survey / War Office folding map of Boran, today the northeastern portion of Kenya bordering Ethiopia and Somalia. It was made during the 'Scramble for Africa,' when European colonial powers rushed to occupy and claim territory. However, the harsh climate and resistance of local pastoralists to outside rule meant the region long remained a distant frontier to imperial powers.

Depicting a large portion of what is now northeastern Kenya, the depicted area stretches along the eastern shore of Lake Turkana (here Lake Rudolf) and the northernmost reaches of the Kenyan Rift Valleys, roughly up to the modern borders between Kenya, Ethiopia, and Somalia. Lake Turkana was likely part of the Upper Nile system at one point historically but has been severed from it by changes in the landscape due to volcanic eruptions (animal species found along the Nile, such as the Nile crocodile, are abundant around Lake Turkana). Lake Suguta (here as Sugota) is a mostly dried up saline, alkaline lake, of which the remnant part is called Lake Logipi.

The landscape is defined by mountains (with elevation provided here in feet) and sporadic water sources (marked by small circles with a 'W' next to them), essential for anyone attempting to survive in this environment. Fascinating detail is provided on the terrain and groups inhabiting or moving through different areas. The map and margins include some handwritten annotations, most notably the inclusion of 'Laikipia Post' towards bottom-left.

A Frontier between Empires

At the time of this map's production, Ethiopia (Abyssinia) maintained its independence and unity as a kingdom, though central authority was heavily contested by local rulers. Southern Somalia was ruled by the Sultanate of the Geledi, which had become an Italian protectorate the year before this map's publication and was later incorporated into Italian Somaliland (El Wak, towards bottom-right, today straddles the border between Kenya and Somalia).

A region known for its unforgiving climate of active volcanoes, arid shrubland, and intense heat, several pastoralist groups (generally speakers of Nilotic or Cushitic languages) lived here, grazing flocks on the shrubland (the English name used here refers to the pastoralist Borana people). In the years before this map was made, pastoralist groups suffered tremendously due to epidemics. First, their cattle were decimated by bovine diseases that killed off the vast majority, then the herders experienced drought, famine, and smallpox, killing a large proportion of the Maasai population, for instance.

A remote region even at the outset of the 19th century for the British colonials, traveling here was very dangerous. Both the climate and resistance by pastoralists to outside interference (at this time, Maasai were being displaced further to the south to create large estates for white settlers from South Africa) created a hostile environment. A note below the legend explains that none of the lands included on the map had been surveyed. Occasional expeditions by Europeans and Americans traversed these lands, most notably the one led by American physician Arthur Donaldson Smith in 1894 - 1895. Smith published an account of the trip in 1897 titled Through Unknown African Countries: the First Expedition from Somaliland to Lake Rudolf. The British only established a loose administration for the territory shown here in the 1910s and much of this region is now protected national parkland, though the pastoralists, who have consistently resisted government efforts at sedentarization, maintain grazing rights.

The British presence in East Africa came first in the form of missionaries, from the 1840s, and then commercial ventures in the 1880s. In that critical decade for African history, both the British and Germans set their eyes on the Sultanate of Zanzibar and the interior lands stretching to the Great Lakes. A settlement was made whereby the region was divided between them and the British crown chartered the Imperial British East Africa Company in 1888 to manage British interests and to effectively govern newly created British East Africa. However the company encountered deep financial troubles in the construction of the Uganda Railway and transferred control of British East Africa to the British government between 1893 - 1895.

While British interest was mostly focused on the lands between Mombasa and Lake Victoria, they were concerned about rival powers in the region, especially the Germans. The Italians, who rapidly increased their presence in the Horn of Africa in the late 1880s, also became a concern. A British sphere of influence in East Africa was confirmed at the 1884 - 1885 Berlin Conference, but the exact borders of this sphere were ill-defined because of poor geographic knowledge of the area and the troublesome doctrine of 'effective occupation.' According to this doctrine, colonial powers needed to prove 'effective occupation,' meaning the existence of treaties with local powers, their flags being flown, or having active forts. Rival powers raced to establish a presence in unclaimed territory, often building railways in their wake to strengthen their hold. Indigenous rulers aligned with one or another of the competing European powers to try to maintain a degree of independence, but these agreements were later used to reduce or eliminate their autonomy under colonial administrations.

This map was one of a series of 'district sheets' (OCLC 460478112) of various regions in Africa compiled by the Intelligence Division of the British War Office at the turn of the 20th century. This example was printed at the Ordnance Survey office in Southampton and published by Edward Stanford, a major map publisher in London. This sheet is not known to be cataloged in any institution's holdings and has no known history on the market, while the series just mentioned is only held by a small handful of libraries worldwide.