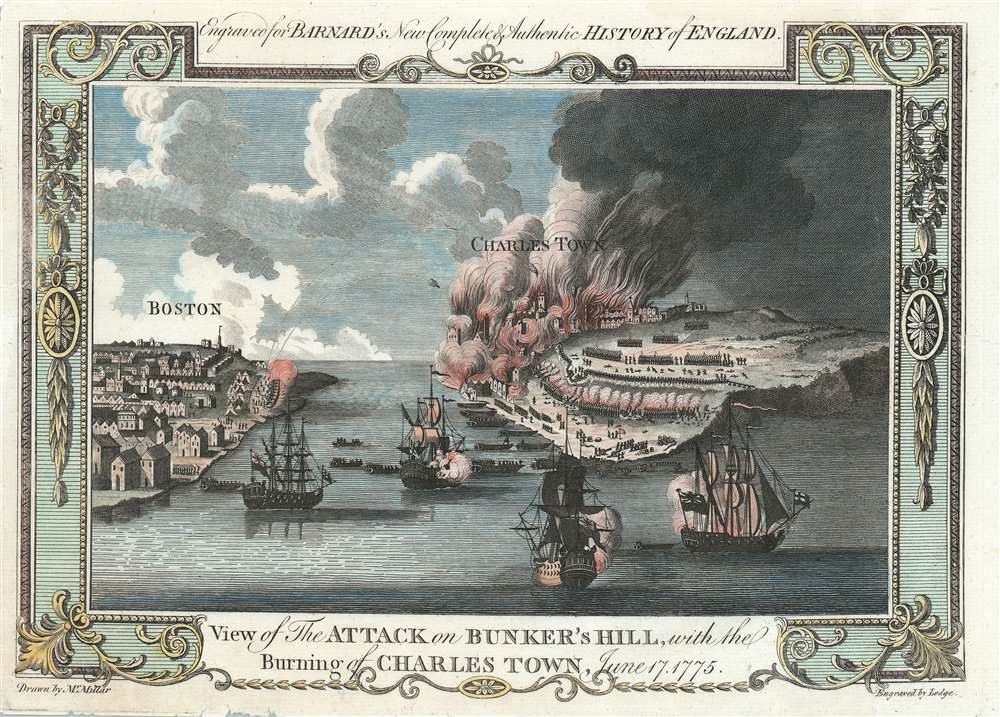 One of the earliest obtainable views of the 1775 American Revolutionary War Battle of Bunker Hill.
$1,500.00

One of the earliest obtainable views of the 1775 American Revolutionary War Battle of Bunker Hill. Published in 1783, this view illustrates the June 17, 1775 Battle of Bunker Hill, Boston, one of the first and most significant battles of the American Revolutionary War (1775 - 1783). The view looks east from Boston Harbor. Boston is on the left, Charlestown and Breed's Hill are afire on the right. British naval vessels fill the harbor, while long range cannons bombard Charlestown from Boston. The view is reasonably accurate, suggesting that the artist, 'Mr. Millar', probably George Henry Millar, may have witnessed the battle first hand or drew upon the experience of one who had.

The Battle of Bunker Hill was one of the earliest and most important battles of the American Revolutionary War. Although identified as 'Bunker Hill', the actual battle was on Breed's Hill. British forces quartered in Boston, which was then a peninsula, were easily contained by Colonial forces controlling few choke points and high points in the surrounding hills. One such, Breed's Hill, was fortified by Colonial when reconnaissance discovered that British forces were about launch an offensive against the surrounding hills - this securing Boston. The overconfident British sailed across the Charles River in a direct assault on the well-fortified position. Although more numerous, better trained, and better equipped, the British forces were thrown back twice before ultimately taking the defensive fortifications on Breed's Hill. Although the Battle of Bunker Hill, as it came to be misnamed, was a loss for the Colonial army, it was a hard-won victory for the British, who had 1054 casualties vs. 450 colonial casualties. Moreover, many of the British casualties were officers and command staff, a crippling setback the undermined British Confidence. The battle forced the British command to subsequently take the 'rebels' more seriously.

This map was issued at the end of the American Revolutionary war to accompany Edward Bernard's 1783 New, Comprehensive and Complete History of England. It is engraved after a drawing prepared by George Henry Millar and published by Alexander Hogg. This view appears in several institutional collections, but is scarce to the market.

George Henry Millar (fl. 1780 - 1790) was a British engraver and map publisher active in London during the latter part of the 18th century. Millar published the 1782 New and Universal System of Geography. He is also credited with an early view of the 1775 Battle of Bunker Hill. Most of his work was published between 1782 and 1785, and we have found no earlier or later productions.


John Lodge (1735-1796) was a British engraver, map seller, draughtsman and stationer active in London from roughly 1755 to the late 18th century. Lodge, born in London, was apprenticed to Thomas Jefferys, one of the most prominent and prolific map publishers and engravers of his day. He produced several maps for The Gentleman's Magazine and The Political Magazine and other publications. He also engraved book-illustrations, portraits and botanical plates and taught etching and engraving. Around the 1780's, he is believed to have lived to Dublin, where he did a significant amount of engraving work for Dublin booksellers. Lodge was survived by his wife Ann, to whom he left his entire estate, and his son John Lodge, who was also an engraver.

Bernard, E., The New, Comprehensive and Complete History of England, (London: A. Hogg) 1783.