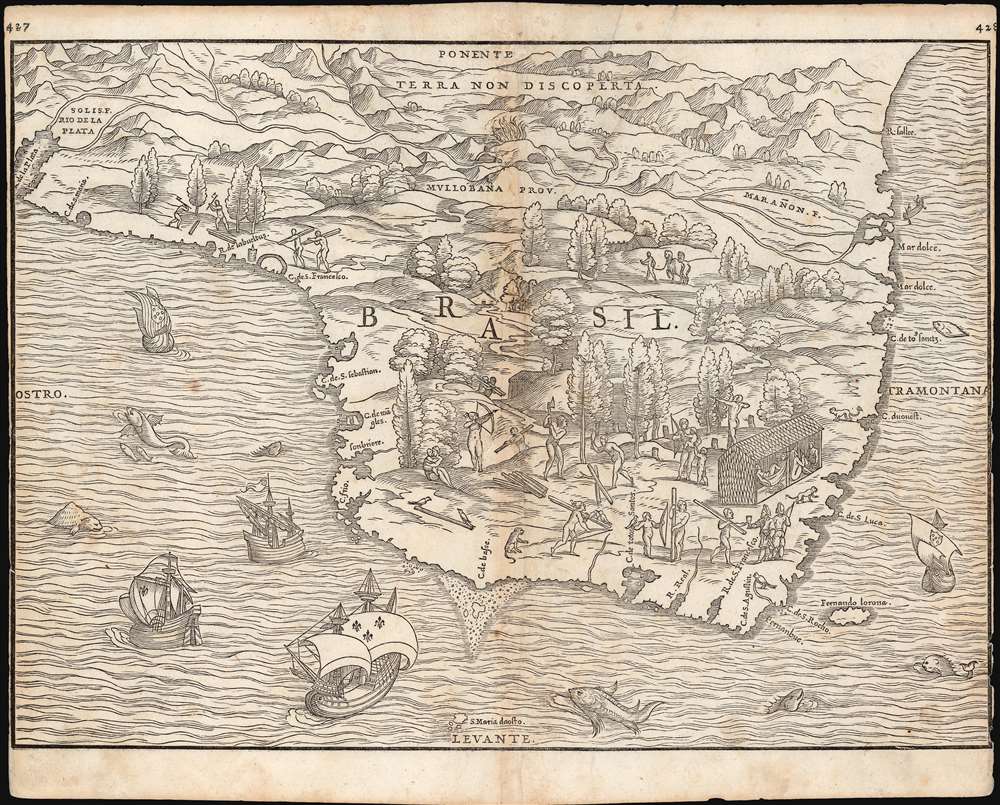 The first state of the earliest specific map of Brazil.

This is the seminal, rare 1556 Giovanni Battista Ramusio map of Brazil, the first printed map to focus specifically on the area. It appeared in Ramusio's 1556 Navigationi et Viaggi, the first collection of explorers' first-hand accounts of their travels. The woodcut represents the first glimpse in print specifically of Brazil. The geographical information is generally credited to Giocomo Gastaldi (1500 - 1566). Much of that detail, and all of the socio-ethno-economic imagery of the map appears to have been drawn either from the 1519 manuscript Lopo Homem (1497 - 1572) Carta do Brasil, or from one or another manuscript of the Dieppe school. This is significant. An overwhelming percentage of maps of South America in the 16th century, printed and manuscript, carry either imagery or text describing the indigenous population as savages and cannibals. Of the early printed maps of Brazil, this is the only to highlight instead the harvesting of the lumber, which represented the initial economic draw for Europeans: Brazil wood, which when harvested and processed produced a highly desirable dye. Not only are the natives shown harvesting trees, and hauling them to the shore - they are also shown with parrots and monkeys, also desirable trade items. More significantly, the map shows a native exchanging lumber for a cup, given by men in European garb. This is one of the only printed maps to depict the active trade which had been underway for decades between French mariners from Normandy and the Tupi peoples of Brazil. Ramusio, as Venetian ambassador to France, may well have had access to French manuscript maps of the Dieppe school (which Surekha Davies notes were remarkable for their depiction of Brazilian indigenes as trade partners rather than predators.) The ships shown sailing the Atlantic here tell a related story: The Portuguese enjoyed a Papally decreed monopoly on the exploitation and colonization of Brazil under the 1494 Treaty of Tordesillas. French / Norman trade with Brazilian natives was done in defiance of the Portuguese, frequently meeting armed resistance. Of the five ships on this map, the smaller three sport the arms of Portugal. The two larger ships in the foreground bear the French fleurs-de-lis. This is a common thread appearing on Ramusio's maps: the notion that whatever the Portuguese have found around the world, the French ought to be able to take.

This distinctive woodcut is oriented to the west, with north to the right. The cardinal directions are marked at the four quarters. Coastal place names are indicative of early Portuguese exploration and colonization, prior to the establishment of the Captaincies by which Portugal would eventually administer the region. The coastline offers placenames from the Rio de la Plata in the south, and the R. Sallec in the north, possibly the Orinoco. The Amazon river is shown as 'Marannon,' with its source in the 'Mullobamba', here marked with an exploding volcano.

The Transition From Italian to Global Geography

The names used here for the cardinal directions - Tramontana, Ostro, Ponente, and Levante - were typical for 16th century Italian cartographers, but would soon be abandoned. These names were taken from the predominating winds in the Mediterranean: Tramontana, for example, referred specifically to the winds that came down across the Alps. While these had once been useful and communicative terms, their use far from Italian waters became increasingly nonsensical. 'Tramontana' would, by the end of the 16th century, be replaced by 'Septentrionale' - a term derived from astronomical observation of the seven stars of the Little Dipper, and of utility in any waters of the northern hemisphere.

Ramusio, in the introduction to his Navigationi et Viaggi, wrote that he asked Giacomo Gastaldi to provide maps for his work. It is not known whether the great Venetian cartographer actually did so himself as an analog to this map does not appear in Gastaldi's 1548 Ptolemy (although the 1561 Ruscelli, otherwise copied from the Gastaldi, does have a Brazil map which shares the geographical detail of this one. The actual woodcut was executed by Matteo Pagano (1515 - 1588).

This map was first cut by Matteo Pagano for inclusion in the 1556 third volume of Ramusio's Navigationi et Viaggi. The woodblocks for this, and indeed all of the maps of the 1556 edition burned in a 1557 warehouse fire. It appears in only one known state. The blocks were all re-engraved, probably again by Pagano, for the 1565 edition of the Navigationi et Viaggi. The second block is geographically identical to the first; the two blocks are most easily distinguishable by differences in the trees appearing behind the various buildings. That second block was employed one more time in 1606, this edition easily identifiable by the small worm-shaped blank areas (woodworm appears to have similarly infested all blocks of the 1606 edition.) The 1556 edition of the third volume of Navigationi et Viaggi is rare. Seven examples of the 1565 are listed in OCLC, while just twenty of the 1606 edition appear. Only two examples of this separate map are catalogued in OCLC, appearing in the National Library of Scotland and Washington State University.

Good. Trimmed close to left and right margins with some loss. Mended worm tracks at centerfold with some manuscript reinstatement of image.