1886 Sharbau and Milne Map of Burma (Myanmar) and Thailand 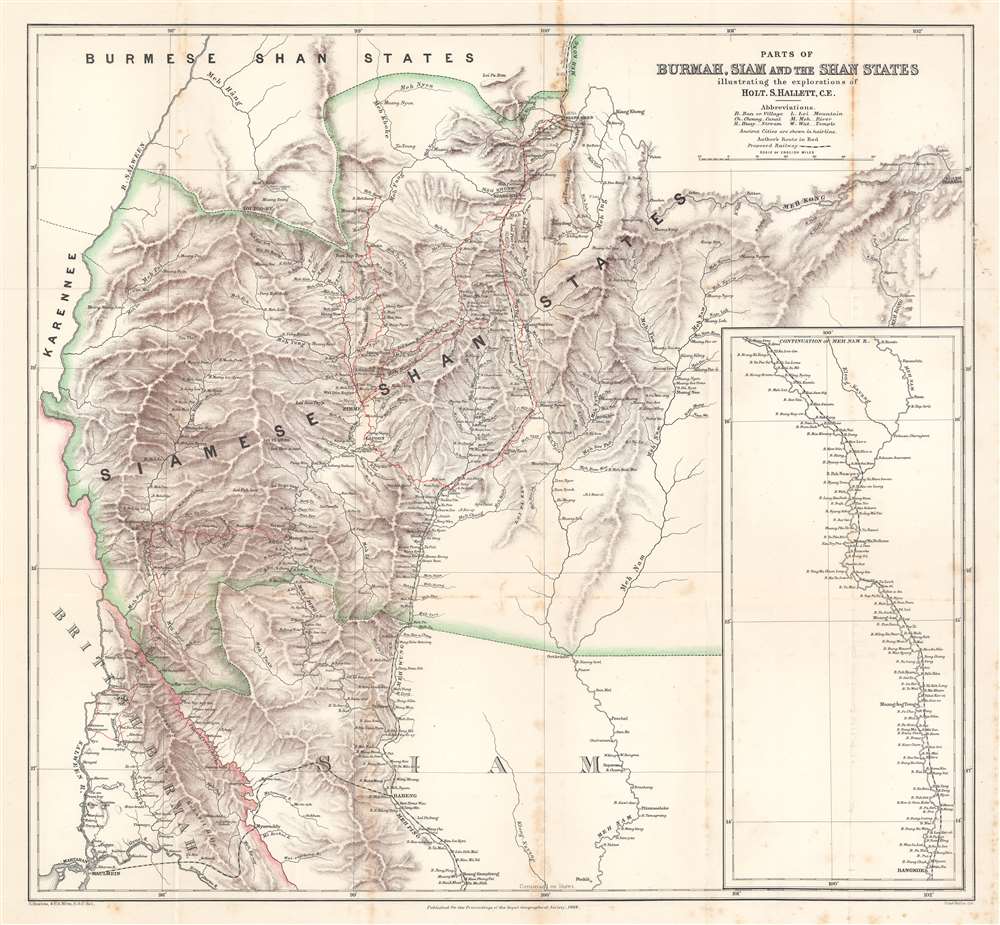 1886 Sharbau and Milne Map of Burma (Myanmar) and Thailand

This is an 1886 Henry Sharbau and H. A. Milne map of Burma (Myanmar) and Thailand. The map focuses on northern Thailand (Siam) and the railroad proposed by civil engineer Holt S. Hallett (1841 - 1911) and his associate Archibald Colquhoun (pronounced kuhl-HOON.) It was created to accompany a paper Hallett presented to the Royal Geographical Society. Red lines trace Hallett's explorations, scouting and surveying the best railroad route. A dashed black and white line illustrated the proposed railway, running south from Kiang Hsen to the map's lower border. An inset along the right illustrates the route's continuation to Bangkok.

The opening of Siam in 1855 led to a flood of enterprising westerners angling for concessions. By the 1880s foreign demand for investment in Siam (primarily resource extraction) reached its height. In 1885 the British annexed Northern Burma, which accelerated interest in Siam in hopes of creating a trade route between China and British Burma. In the early 1880s Colquhoun and Hallett began pressuring the Siamese to help finance survey and construction of just such a railroad. The pair continued their efforts through 1890 and canvassed Britain for investment. They spoke to Chambers of Commerce in London, Leeds, Liverpool, and Manchester (among others). In all likelihood, the paper presented to the Royal Geographical Society that included this map was part of the capital campaign. Their railway never came to fruition. An insurgency in the Shan States (northern Thailand) demanded the Siamese government's attention, as well as that of the British colonial government in Mandalay in northern Burma.

Occupying a large portion of this map, the Shan States were a collection of kingdoms in British Burma and northern Siam. These states had been independent kingdoms for hundreds of years. Each kingdom had its own agreement to pay tribute to a certain country for protection, either Burma or China. When the British invaded in 1885, this upset the delicate balance and led to years of fighting and insurgency. To this day, the Shan States are in open rebellion against the Myanmar central government.

This map was created by Henry Sharbau and H.A. Milne to accompany a paper by Holt Samuel Hallett published in the 1886 edition of the Proceedings of the Royal Geographical Society. Three examples are cataloged in OCLC and are part of the institutional collections at Harvard University, the University of Chicago, and Southern Illinois University.


H. A. Milne (fl. 1879 - 1887) was a British draftsman and cartographer. Milne joined the in-house drawing office in 1879 as an assistant to William John Turner. When Turner resigned in 1881 to join W. And A. K. Johnston in Edinburgh, Milne applied for the position but was overlooked in favor of Henry Scharbau (anglicized Sharbau). Milne continued on as Sharbau's assistant until 1887 when the Royal Geographical Society let him go because of ill-health and prolonged absence. Learn More...