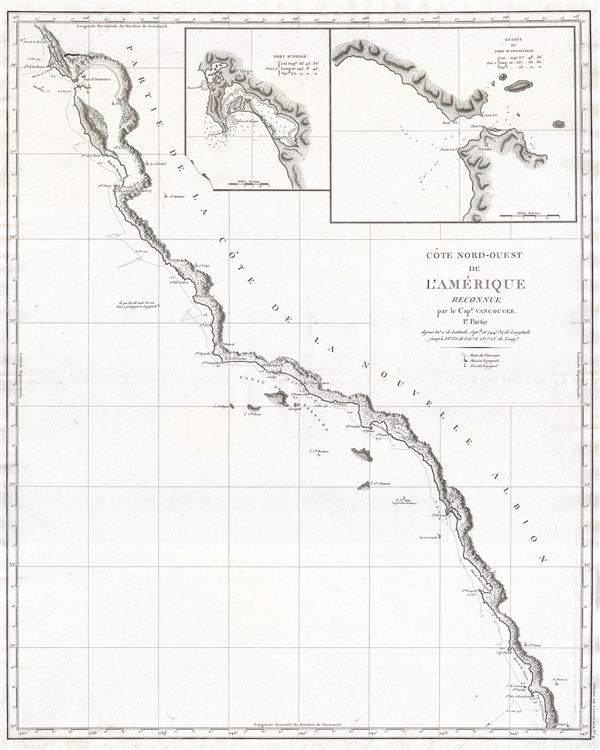 One of the great navigator George Vancouver's most important and influential maps, this is Vancouver's 1799 mapping of the California coastline roughly from San Francisco Bay in the north to Santo Domingo, Mexico. Vancouver's exploration of the California coastline was particularly ground breaking as he was among the first englishman to successfully report on the Spanish settlement and colonization of America's western coastline. One of the first foreign explorers to visit and map the Spanish settlement and port at San Diego (see inset upper right), he was not impressed, describing it as 'indolent,' 'poor,' and 'dreary.' Further north, the missions, most of which have since become modern California cities, of San Juan, San Gabriel, San Buenaventura, Santa Barbara, La Purissima, San Louis, San Antonio, Santa Carlos del Monterrey, La Soledad, Santa Cruz and Santa Clara are noted. On November 14th of 1792 Vancouver become the first englishman to pass the Golden Gate and enter San Francisco Bay (upper right inset), though he admittedly did little to map the interior of the Bay. The fort at Presidio that would one day evolve into the modern city of San Francisco appears in the upper right inset. Though not the goal of his expedition, which lay further north, Vancouver's mapping of the California coastline generated the finest costal chart of the region to date and is an important stepping stone in the cartographic history of the American west coast.