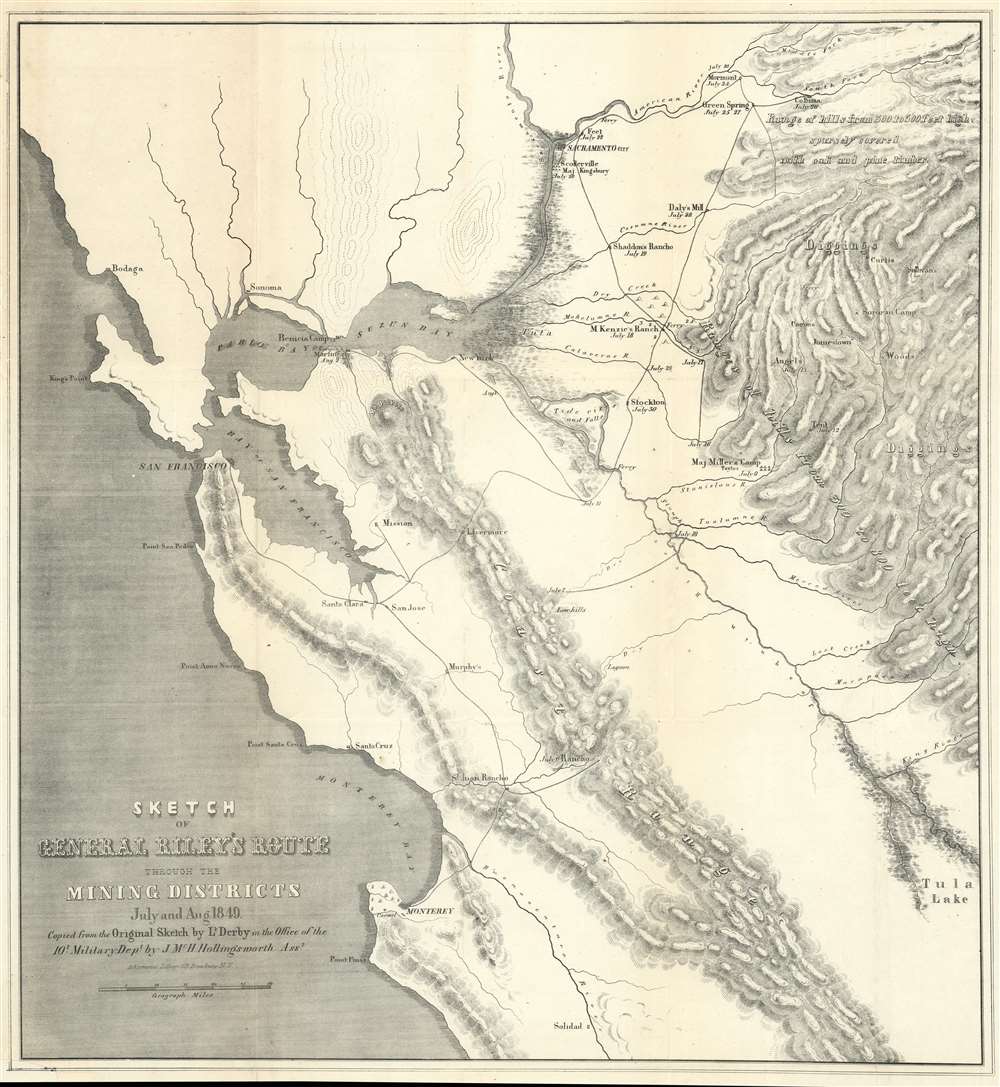 This is an uncommon California Gold Rush Era map of the gold regions to the west of San Francisco Bay, California. The map follows the 1849 expedition of General Bennet C. Riley (1787 - 1853), California's first 'civilian' governor, to gather important reconnaissance of the gold diggings and mining at the height of the Gold Rush. Although the full mining area is not encapsulated, coverage is extensive, ranging from the Pacific Coast to the western Sierra Nevada Range, and from just north of Sacramento to Tule Lake. The map notes the diggings along the America River, early roads, towns, rivers, etc., including Scollerville, Green Spring, Colluma, Jonestone, Corons, Angel's, Sororam Camp, Sullivan's, Curtis, Woods, Tent, Maj. Miller's Camp, M. Kenzie's Ranch, Stockton, Daly's Mill, etc.

In his important work, The Maps of the California Gold Region, cartographic historian Carl Wheat comments on this map,

Derby accompanied General Bennet Riley on his trip through the gold diggings . . . , and although his map shows only a portion of the 'Mining Districts,' it is important since on it appear for the first time several names of certain actual mining camps in the middle of the Sierra foothills. Among these are Mormon Island (misspelled 'Mormont' by the eastern lithographer who copied Derby's sketch), Coloma (mislabeled 'Colluma'), Curtis, Sullivan's, Corons, Jamestown, Woods, Sonora, and Angel's,-and one doubtless accurately labeled only 'Tent.' Some of these names have not survived, but Derby's map graphically shows how the miners were beginning to swarm up the Sierra streams into the general area which he designated as 'Diggings.' The entire route of the Riley party is noted, with the dates of their visits to the various points.

Riley and a Most Violent Gold Rush

In the years 1849 and 1850, General Riley commanded the Military Department in Upper California and exercised the duties of Provincial Governor: the inaction of Congress in deciding the issue of California statehood complicated his service. This was the height of the California Gold Rush and its most violent period. Fortune seekers flooded into California from around the world, many lawless vagabonds, happy to take what they could not earn - often from California's indigenous American Indian population. Riley and his forces toured extensively in the gold region attempting enforce order, but daily desertions compounded difficulties created by limited resources and supplies. Consequently, Riley and his military authorities could not prevent the slaughter of California's native population, nor could they suppress the violence in the lawless gold camps.

The discovery of gold at John Sutter's mill by James Wilson Marshall in January 1848 was one of the most definitive moments in American history. Coming at the end of the Mexican-American War, the timing of the discover could not have been more propitious. The combination of new seemly unlimited territory and the lure of gold lead to a literal stampede of adventurers, prospectors, merchants, and homesteaders ready to take their chance for a new prosperous life on the frontier. Moreover, the Gold Rush was not limited to Americans crossing the Great Plains. European, Australian, and even Chinese immigrants rushed into California hungry for their part of the great strike. This Great Migration of peoples transformed the United States in the span of just a few years from a former colony into an expansive transcontinental nation on the cusp of becoming a world power. It tragically also contributed to the wholesale slaughter and disenfranchisement of California's indigenous American Indian population.

This map of General Bennett Riley's route through California's mining districts was copied from an 1849 sketch by George Horatio Derby. The copyist was John McHenry Hollingsworth. It was lithographed and printed by Ackermann of New York. The map was issued for a congressional report, 1850, focusing on California and Nevada. Uncommon to the market.

George Horatio Derby (April 3, 1823 - May 15, 1861) was an American military officer, topographical engineer, and humorist. Derby was born in Dedham, Massachusetts to a wealthy family dedicated to the arts rather than commerce. He graduated from the U.S. Military Academy at West Point in 1846 - just in time to serve in the Mexican American War (1846 - 1848), where he saw action at Veracruz and Cerro Gordo. After the war he was stationed with the Topographical Engineers in California under General Bennet C. Riley (1787 - 1853). He accompanied Riley on his travels throughout the region, serving as a mapmaker and topographer. Later, in 1853, he was sent to San Diego to map the San Diego River and San Diego Bay. Darby was known for an erratic, flippant manner that both endeared and infuriated his superiors. It may have been during his tenure in San Diego that Derby developed as a humorist. Under the pseudonyms 'John P. Squibob' and 'John Phoenix', Derby contributed mocking articles that poked fun at the pretensions of the social elite to the San Francisco Herald, California Pioneer, and the struggling local newspaper, the San Diego Herald. He used his family resources to purchase the San Diego Herald in 1855, but perhaps due to his military commitments, was unable to make it profitable, and it folded in 1860. Darby himself began exhibiting health problems, including vision loss and headaches, possibly related to a brain tumor, in 1857. He requested leave from the Topographical Engineers in 1859, citing poor health, and moved to New York, where he died shortly after the start of the American Civil War. Learn More...