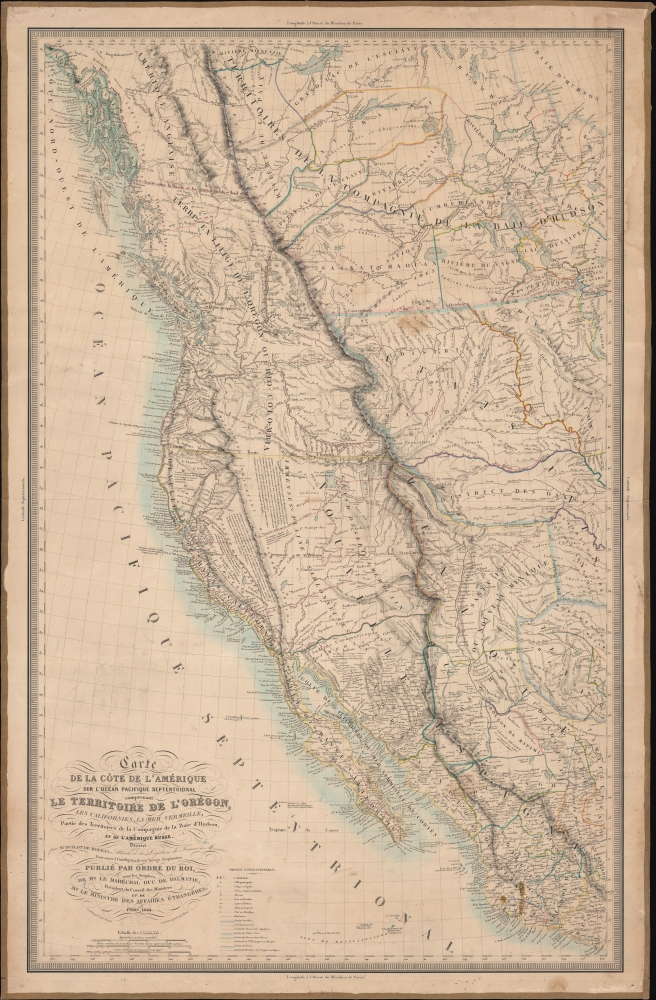 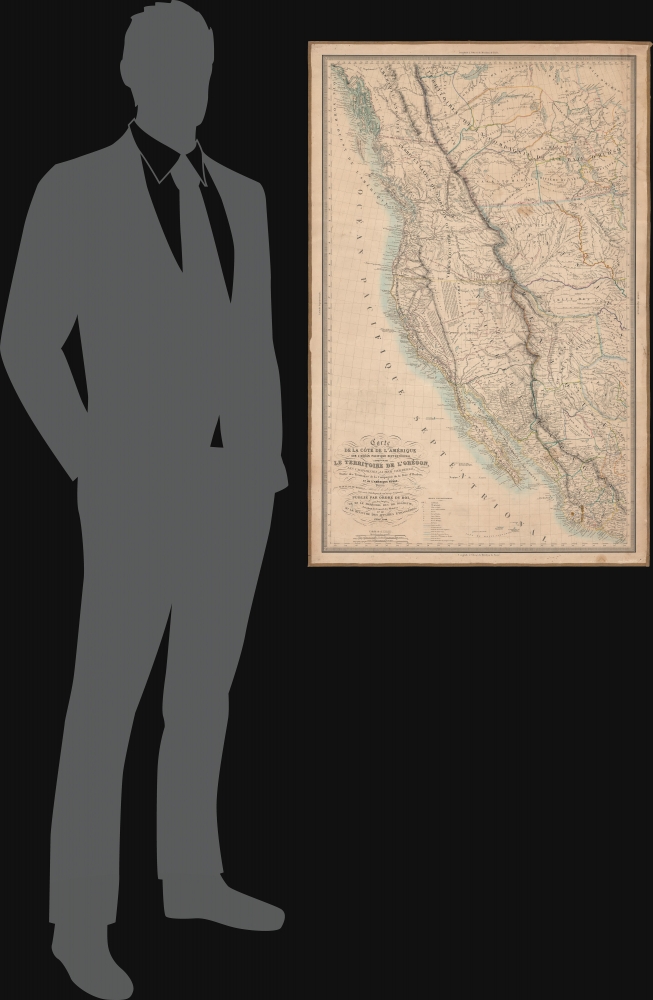 A Landmark' Map of the American West 'by a Frenchman . . . intent upon forwarding the interests of France on the Pacific Coast' - Carl Wheat
$15,000.00

Published in 1844, this is one of the most interesting and seminal maps of California, Oregon, and the American west predating the Mexican-American War. This map, prepared by the French diplomat and spy, Eugène Duflot de Mofras, was drawn in anticipation of a French bid for California in response to a crumbling and bankrupt Mexican state. Coverage follows the Pacific Coast from Sitka to Acapulco, and inland as far as Texas and the Lake of the Woods. While loosely derived from John Arrowsmith's map of 1837, this map is awash with new information from De Mofras' voyage and is truly, in the words of cartographic historian Carl Wheat, 'A Landmark Map.' It is significant not only for its geography, but because this map was the first to introduce western America to Europe.

De Mofras' map, which is dense with content, is by far the best map of this region that had yet been published. The work focused on the viability of colonization, trade resources, existing settlements, and terrain. As described by Wheat though, De Mofras' main interest seems to be travel routes and transportation. He writes

De Mofras was much interested in travel routes. East of Santa Fe he noted the 'Route de Chariots des Etats-Unis,' and (for the first time on any published map) he showed what later came to be called 'The Old Spanish Trail' between New Mexico and Southern California, which De Mofras drew through the Hopi Villages (it actually went far north of that area, to avoid the Colorado's canyons). He has Escalante's route, and a short 'le Capte. Smith en 1828,' with 'Route des Americaines des Etats-Unis en California.' In Oregon he shows the 'Route des Wagons des Etats-Unis ou Ouallamet' from Fort Hall south of the Snake, then northwesterly to an area marked 'Habitations des Français Canadiens.' Along the Snake is the 'Route par eau des Etats-Unis au Rio Colombia,' and finally, going up the Platte across to St. Vrain's Fort, over the Rockies south of South Pass, and on to 'Lac Salé, Yuta ou Timpanagos' is shown the 'Route des caravans de la Cie des fourrures de S. Louis.'

The Mexican War of Independence, fought between 1810 and 1821, fully destabilized the Mexican economy. Although Mexico achieved its hard-won independence, centuries of established trade relationships with Spanish interests were abruptly terminated. At the same time, Mexico had accrued massive war debt, mostly with British financers. Lacking the ability to repay their debt, the Mexican government instead began granting massive trade and mining concessions to the British creditors.

They also sought another European trading partner in France. Favorable terms led to considerable French investment despite an increasingly insolvent and destabilized Mexican government. By 1830 the French investors and merchants were Mexico's third largest trading partners, after the United States and England.

Nonetheless, civil disorder throughout Mexico lead to the regular looting and destruction of private property. In 1832, a French pastry chef, monsieur Remontel, claimed that Mexican soldiers looted his shop causing some 60,000 pesos in damage (apparently his shop was only worth about 1000 pesos). This and another offenses (among them the 1837 execution of a French pirate) led French prime minister Louis-Mathieu Molé to demand from Mexico the payment of 600,000 pesos. When Mexico ignored the demand, the French ordered a naval blockade of all Mexicoan ports and seized the port of Veracruz – what is today known as the Pastry War. Mexico ultimately agreed to pay the 600,000 pesos and offered numerous trade concessions to France, further increasing French interest in Mexican trade.

Meanwhile, British financiers continued to press Mexico for payment and the Mexican government was near to ceding all of California to Britain in lieu of its debt. France, newly influential in Mexico, not to be outdone, recognized an opportunity and needed more information. De Mofras was dispatched to assess the viability of a French bid for California, as well as perform a reconnaissance on American and British activity in the region.

Following visits to Jalisco, Colima, Sinaloa, and Sonora in 1840, Duflot de Mofras sailed in April 1841, aboard Ninfa, from Mazatlán, via San Pedro, arriving at Monterey on May 6. On June 11 he met with commandant Mariano Guadalupe Vallejo in Sonoma, continued to Fort Ross, and returned to Monterey in July. On September 1 he sailed up the Sacramento River with A.G. Rotchev, manager of Fort Ross, to New Helvetia, where he met with John Augustus Sutter, with whom Rotchev was to initiate negotiations for sale of the Russian fort. Duflot de Mofras subsequently visited San José, Santa Cruz, and San Francisco, sailing from that port on October 18 aboard Cowlitz to the Hudson Bay Company’s Fort Vancouver, meeting the U.S. Exploring Expedition commanded by Charles Wilkes en route. He returned to San Francisco with Hudson Bay Company director Sir George Simpson and factor John McLoughlin and U.S. agent Horatio Hale on December 30 aboard Bolívar, and continued to Monterey. On January 3, 1842, aboard Maryland, Duflot de Mofras sailed via Santa Bárbara to San Diego where he remained from January 18 to January 27, prior to continuing to Mazatlán, and thence to Mexico City.

This map exists in a single edition, but an advertisement for the sale of this map appearing in an 1844 issue of the Gazette Nationale, offers 3 formats: regular, large, and grand. It is not known if the map was ever actually produced in these formats, but if it was, then this would be either the large or grand. It was also issued in the atlas volume of De Mofras's book, Exploration Du Territoire De L'Oregon, Des Californies Et De La Mer Vermeille, Executee Pendant Les Annees 1840, 1841 Et 1842. Variants from the book typically have narrower margins, so we can say with some confidence that the present example is one of the separate issue formats, probably large or grand, with original linen backing.

It was published by Arthus Bertrand in Paris. This map appears in several institutional collections, but is quite rare on the private market. It is an essential map for any collection focusing on the American West.

Eugène Duflot de Mofras (July 5, 1810 - January 30, 1884) was a French naturalist, diplomat, explorer, and spy active in the 19th century. Mofras was born in Toulouse, France, the 7th son of Vost Cosme Nicolas Duflot and Anne Julie Mofras. He served as the French political attaché to Madrid (1828 - 1839) before being transferred in 1839 to the French Legation in Mexico. He was dispatched in 1839 on an intelligence reconnaissance or spy mission to explore the Pacific Coast of North American from Upper California (Alta California) to Oregon Territory, study American, Spanish, and Russian activity, and assess the viability for French expansion into this region. His two volume work, Exploration du territoire de l’Orégon, des Californies et de la mer Vermeille, exécutée pendant les années 1840, 1841 et 1842 is regarded as a seminal accomplishment and the most detailed overview of this region prior to the American occupation. Learn More...