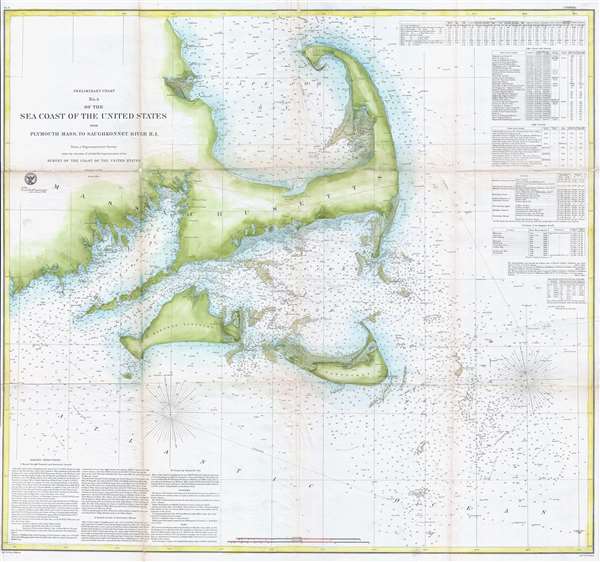 Includes a detailed depiction of Nantucket and Vineyard Sounds.

This is an 1857 United States Coast Survey nautical chart or maritime map of the Massachusetts coast. The map depicts from Plymouth, Massachusetts to Saughkonnet River, Rhode Island. Barnstable County, Cape Cod, Nantucket, and Martha's Vineyard are illustrated. Countless depth soundings, many offshore shoals, and other dangers are included, with the greatest concentration in Vineyard Sound. A tide table, information about light houses and beacons, light vessels, currents, and variations of the Magnetic Needle are all situated along the right border. In the lower left corner, sailing directions concerning navigation through the Vineyard and Nantucket Sounds, outside of Nantucket Shoals, and up Buzzard's Bay are present, allowing for even more practical use of this chart.

Published under the supervision of A. D. Bache for the 1857 Report of the Superintendent of the U.S. Coast Survey.