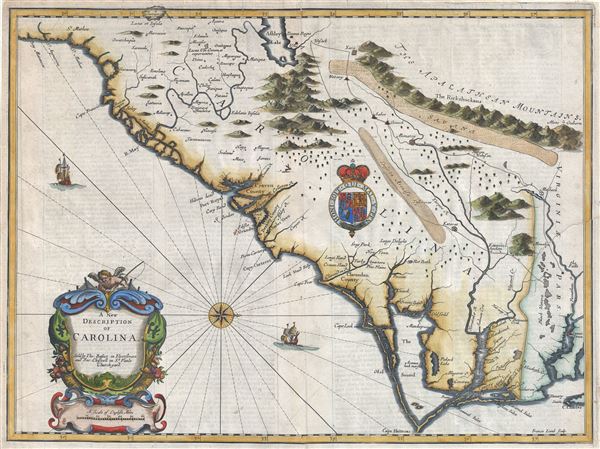 A ground-breaking map of Carolina showing the contentions geography of Jonathan Lederer.

A very attractive example of John Speed's important and rare 1676 map of the Carolina colony - representing the first serious attempts to map the interior of the Carolinas based upon actual exploration. Speed heavily based his cartography of Carolina upon the explorations of John Lederer and Ogilby's Lords Proprietor's Map of 1674. Oriented to the West, map covers from the Spanish colony of St. Augustine, Florida, north to the English colony of Jamestown, Virginia. It extends inland as far as the Appalachian (Apalathean) Mountains.

By the middle of the 17th century the coast of Carolina had been fairly well mapped, St. Augustine, Port Royal, Charleston (Charles Town), Cape Fear, Cape Lookout, Cape Hatteras, Roanoke, Cape Henry and the James River are all shown with a fair approximation of accuracy. We see ample evidence of the Lords Proprietors including Albemarl County, Clarendon County, Berkley County, Craven County, etc. This map also incorporates numerous elements from earlier maps including Lake Sarrope, which was identified by the De Bry - Le Moyne map of 1565 and most likely represents Lake Okeechobee. It also shows the River May (historically either the St. John's River or the Savannah River, depending on the map).

Where this map really gets interesting is the interior, which is based upon the c. 1670 explorations of John Lederer. Lederer, a German physician who had moved to the colony several years before was commissioned by the Lord Proprietor, Anthony Ashley Cooper (Earl of Shaftesbury), to explore the interior in search of a pass beyond the mountains to the Pacific. As the time it was commonly assumed that the mainland of North America was a relatively narrow strip of land that could be traversed swiftly easily to access the rich trade opportunities of the Pacific. Though Lederer never managed to cross the Appalachians, he did undertake three voyages which significantly impacted cartography in this region for several hundred years.

Today Lederer is highly criticized for fabricating much of his journey and a cursory examination will reveal what might seem to be gross cartographic errors, including a great savanna in the Piedmont, the Deserta Arensa, and Ashley Lake in the south. Lederer's route is roughly traced on this map as he heads almost directly west from the Falls of the James River before turning southwest at the Mahock Village (near Richmond). Keeping to a southwesterly course, Lederer passes a great savanna on his right and ultimately finds himself on the shores of Ashley Lake (which he calls Ushery and which on our map corresponds with the Great Freshwater Lake of the American Southwest popularized by the 1606 Mercator - Hondius Map). At this point Lederer returns along a parallel but more easterly course passing through a great sandy desert, the Deserta Arenosa, before returning to known coastal lands. Many scholars have argued that Lederer simply lied about many of his findings, but we find that much of what he said, when taken in the context of lonely explorer traversing an unknown land several hundred years ago, has merit.

Separating Fact from Fiction - the Savannah

The third anomalous element on this map is the great Lake Ashley. This lake, the source of the May River, appeared on maps since the mid-16th century Le Moyne-De Bry map. Lederer would have no doubt been familiar with later incarnations of this lake as popularized by Mercator and Hondius. Lederer claims to have found the lake and even to have sampled its waters. Some scholars have claimed that Lederer fabricated this discovery to add legitimacy to his explorations. Indeed, the lake had been around on maps for a hundred years and, had he not come across it, many of his other discoveries would have been thrown into doubt. Cummings suggests that Lederer may have turned back somewhat earlier than he claimed and simply added the lake having misunderstood the American Indian sign language describing the wave-like undulations of the Blue Ridge Mountains. Another scholar, Lyman Carrier, suggests that Lederer has actually stumbled across the Catawba Valley where 'had the rivers been obstructed by beaver dames or debris, or had the channels through some of their gorges not been cut to their present levels, large areas of flooded land would have resulted.'

After Lederer, nearly twenty five years would pass before another European explorer documented this region and consequently it is conceivable that whatever he actually saw, much may have changed.

Engraved by Francis Lamb and published in Richard Chiswell's 1674 edition of John Speed's Theatre of the Empire of Great Britain. Well represented in institutions but uncommon to the market.


John Ogilby (November 17, 1600 - 1676) was a Scottish translator and cartographer. John Ogilby's life seems to be one of extremes, teetering between wealth and poverty, success and failure. Ogilby was born near Edinburgh, Scotland, into a once wealthy family laid low by extreme debt. Struggling with poverty at every turn, Ogilby involved himself in various businesses ranging from dancing master, to actor, to tutor. In 1612, at age 12, Ogilby won a lottery run to advance the colonial interests of Virginia. His winning were sufficient to pay of many of his father's debts and apprentice himself to a dancing master. Ogilby proved a natural and graceful dancer and even made extra money tutoring his fellow apprentices. Starcrossed as he was, Olgiby's dancing career ended when a misstep when a misstep at a masked ball injured his leg and left him lame for live. Afterwards he managed to leverage his contacts in the dance world to secure a position as a dance instructor to the daughters of Sir Ralph Hopton. Hopton struck an immediate friendship with Olgiby and trained him in Military Science. Later Ogilby relocated to Ireland where he worked an as actor and later as Master of Revels. The Irish Rebellion of 1641 again dashed Ogilby's fortunes and forced him to flee Dublin by ship. On the way, the ship sunk but the survivors were rescued and eventually made their way to England, which was then under the strict rule of Oliver Cromwell. Ogilby took refuge at Cambridge where he mastered Greek and Latin. Following the Restoration of Charles II, Ogilby invested in his first major literary venture, a translation of Virgil into English. This work earned him the patronage of Charles II, despite the ridicule of prominent poets Dryden and Pope. Under Royal patronage Ogilby published several volumes relating to the Restoration. In short order he has established a successful London publisher based out of the Whitefriars district. This, unfortunately turned out to be a fateful choice of location as in 1666 the Great Fire of London tore through this are destroying Ogilby's publishing stock, home, and business. Once again Ogilby exhibited a remarkable phoenix-like ability to literally rise from the ashes. Shortly after the Great Fire, he began his most important ventures as a publisher of geographical works. In order to recover from the fire, Ogilby and his grandson were took positions as surveyors commissioned to create a large property map of London. The resultant map of London, "London Survey'd", was published in 1677 and earned Ogilby the honorific "Kings Cosmographer and Geographic Printer". His most famous works are his 1675 Road Atlas of England, Britannia which redefined road mapping, and his 1671 Atlas of the Americas. Learn More...


John Lederer (1644 - c.1671) was a German born explorer and physician who was one of the first Europeans to explore the western parts of Virginia and Carolina. Born in Hamburg, Germany, Lederer is a rather elusive figure until he appears in Jamestown, Virginia around 1668. The Governor of Virginia was then William Berkeley who believed that the wealth of his colony would be greatly increased if he could find a passage over the Allegheny Mountains to the Pacific - which he believe to be only a few weeks distant. Lederer was the first to take up the commission to explore these lands. The three subsequent voyages make by Lederer from 1669 to 1670 were both controversial and extraordinary influential. While we will not recount Lederer's voyages in detail here, will say that he was the first European to attempt and accurate mapping of the interior of Virginia and Carolina. Lederer was also most likely the first European to see the Shenandoah valley, and the Blue Ridge Mountains. Some of Lederer's more fantastic claims suggest that he discovered a large savanna in the Carolina-Virginia piedmont, that he crossed a great desert in central Carolina, and that he drank from the mythical Lactus Aquae Dulche. Scholars have argued the merits of Lederer's exploration almost from the first instant of his return, some claiming that his claims were false and others suggesting that they true but represent misunderstandings on his part and on the part of his readers. Our own reading of Lederer's narrative argues for the later and for the relative veracity of his claims. Upon returning from this third expedition Lederer found himself deeply in debt and "he was look'd on as so great an insolence, that our traveller at his return, instead of welcome and applause, met nothing but affronts and reproaches". This most likely resulted from an enimenity developed on with one of his traveling companions on the second expedition, one Major Harris. Lederer and Harris traveled together from the Falls of the James River westward to a point where the James River turned creating a wide lake-like passage. Harris declared that he had discovered a southern extension of the "Lake of Canada" and returned to Jamestown to bask in the admiration of his fellow colonists. Lederer however continued, discovering the truth of Harris's "Discovery" and went on to make what would seem to be pretty major discoveries himself. Harris, a popular Englishman, was no doubt humiliated and dishonored at Lederer's return. Lederer, being a German was an easy target for the predominantly English colonists and later left for Maryland where he was welcomed by Governor Charles Clavert. Calvert issued Lederer a patent to trade furs with Indians outside the colonial borders of Maryland. In 1671 Lederer was naturalized as a citizen of Maryland and gave up his German nationality. There he also befriended William Talbot, nephew of Lord Baltimore, who aided him in the publication of his travel narrative "The Discoveries of John Lederer, etc.." in 1672. Lederer's description of Carolina and his map had a significant impact on the cartography of Carolina for the next hundred years. It is uncertain when and where Lederer died. Learn More...