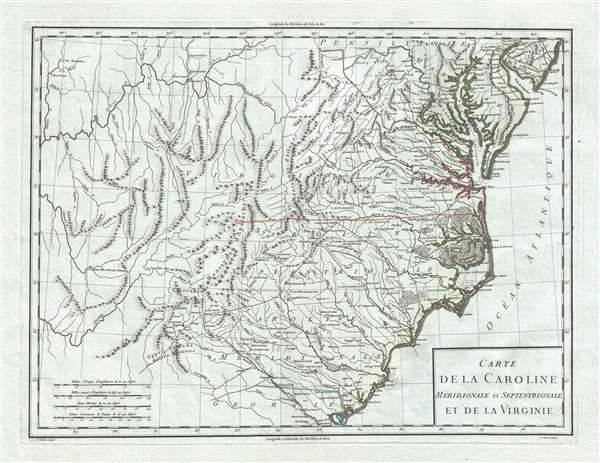 A scarce 1795 map of Virginia and Carolina by Pierre François Tardieu notable for its identification of early trade routes and settlements west of Appalachia. The map is rare and exquisitely engraved detailing the middle-southeast Atlantic seaboard covering from the Delaware Bay to the Savannah River and inland as far as modern-day Iowa. It is notably printed on high quality light blue handkerchief paper that briefly appeared during the French Revolution.

The better knowns and well settled lands east of the Appalachian Mountains are mapped in considerable detail with Tardieu's typical meticulousness, noting settlements, cities, topography, and even some undersea detail. Particular attention focuses on trade routes. The borders of Virginia, and North Carolina fade away at the Appalachian Mountains, suggesting the state of political and physical uncertainty in the region.

There is little activity west of the Appalachian Mountains, but what is represented here is significant including early trade routes, and clusters of traders in the Ohio River Valley, in the Upper Wabash Valley, and in western Carolina. There are a few places of note, particularly in the vicinity of the Ohio and Wabash Valleys.

Early Settlements in the Ohio Valley

In the Ohio Valley, the individualistic place names denote the rough and ready nature of the settlements there. For example, 'Huricane Toms,' a stopping post on the trade route extending north from the Ohio River, is likely the home of a French trader or enterprising American Indian potentate. Also identified is the old French communities of Vieux Lower and Vyand Uxales. Further east, the trading post of Neal Mc Collins is identified.

Settlements in the Upper Wabash Valley

Another cluster of communities appears in the upper Wabash River, most notably Post Vincent. This was an old French trading post originally founded by Sieur Juchereau, Lieutenant General of Montreal, in 1702. Thirty years later, in 1731-32, François-Marie Bissot, Sieur de Vincennes, acting under the authority of the French governor in New Orleans, constructed a fort at this location renaming it in his own image as Vincennes. After the French and Indian War, settlers from Kentucky moved in, often clashing with the established French community and local Indian tribes. Eventually the region would be fully assimilated into the United States and the first Fort Knox would be built just north Vincennes, or, as here, Post Vincent. Further north on the Wabash the American Indian community of Musquitons, allies of the French in Vincennes, is noted.

Further South, in the western part of South Carolina and northern Georgia, along the Cherokee Path, the primary trade route between Charleston and the Cherokee and Creeks lands to the west. Among the sites noted are Fort du Prince George, funded in 1753, and various Chickamauga Cherokee communities around Tugaloo.

The map is printed on fine laid paper with a distinctly blue tint. Blue papers appear in Europe as early as the 15th century, but rose exponentially in popularity in the second half of the 18th century. At the time, papermills collected used rags, which were the broken down into fibers and processed into paper - hence the term 'rag paper'. Blue dies were popular in the European fine-textile industry - particularly among the elite who used blue fabrics for table linens, bed linens, and clothing. Blue dies were less fugitive than other colors, and so were preserved through the papermaking pulpification process. During the French Revolution, the expansive linen closes of the nobility were raided with many of the fine textiles finding their way into papermills. This led to a surplus of blue cloth. Papermakers began experimenting with adding small amounts of blue pulp to stand bleached white pulps, to even out the color and tone - often leading to fine papers with a striking bluish cast - as here. By the end of the 18h century, the fashion for blue paper declined considerably in favor of more traditional white papers. Today maps produced from French Revolution blue paper are highly desirable.

This map was engraved and by Pierre François Tardieu and engraved by Pasquier Jean Valet. It was published and issued for Mentelle and Chanlaire's Atlas Universel.


Edme Mentelle (October 11, 1730 - April 28, 1816) was a French geographer and historian active in Paris during the late 18th century. Mentelle was born in Paris in 1730. He studied under the historian Jean-Baptiste Louis Crevier at the College of Beauvais before accepting a position as professor of Geology and History at the Ecole Militaire where, incidentally, he tutoring the young Napoleon Bonaparte. He remained in this position until the institution was abolished in 1792. Mentelle later worked as a private tutor and then as a professor of Geography at the Ecole Normale. From 1795 he was a member of the Institut National des Sciences et des Arts, which he helped to found. Mentelle published a number of importantly geographical works including the 1778 Geographie Comparee, the 1779 Atlas Universel, and the 1801 Cours Complet de Cosmographie, de Chronologie, de Geographie et d'Histoire. He is known to have worked with Conrad Malte-Brun, Ambrose Tardieu, Peter Simon Pallas, and other important cartographic figures of his period. Edme Mentelle is frequently erroneously confused with Francois Simon Mentelle, another French Geographer who worked with Cassini on his historic survey of France. Learn More...